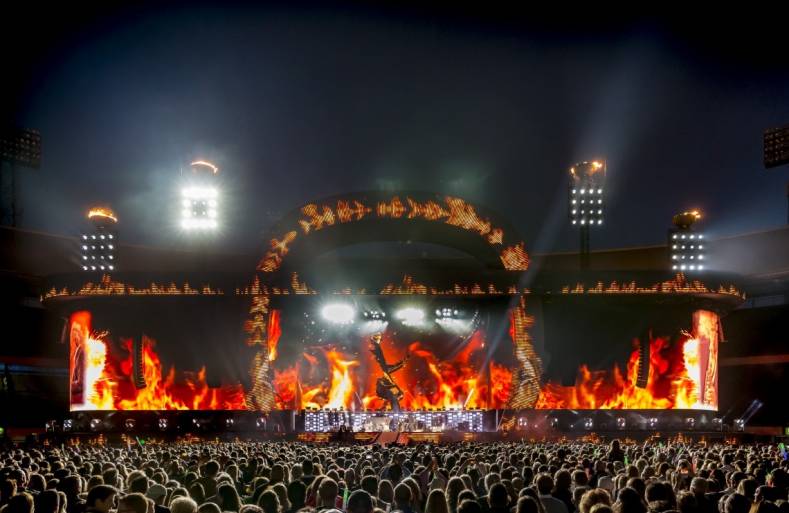 Borsato recently played a stream of sold out record breaking shows at De Kuip stadium in The Netherlands. The set included a 1,000 square-meter LED screen. To power the impressive visuals needed for this event, Michael Al-Far of MalfMedia and Jo Pauly of Visual Solutions turned to disguise servers to provide the power.

“Marco Borsato was adamant that the live feed would be treated to fit better in the cinematographic content,” says MalfMedia founder Michael Al-Far. “As a result, MalfMedia approached Lewis Kyle White to apply his vast experience in IMAG grading for live shows on this project.”

The outdoor show posed a number of challenges: starting in daylight and transitioning to night; a canvas that was by some measures the largest screen ever used for an arena rock concert; the IMAG live feed embedded into the content and not shown on side screens; and a set list of 37 songs that all needed to have the same standard of quality.

“For this show we were looking for some extra horsepower, some headroom, and more power on the Notch side with IMAG effects,” said Jo Pauly of content producer Visual Solutions. “We benefited from the extra performance of the vx 4s and the multitude of 3G live inputs and 4K inputs. The entire system was based on UHD outputs coming from the vx 4 system into the Barco E2 switcher. Whenever the AR images were being used, the vx 4 played out cut and fill layers into the E2 to perfectly accommodate the gx 2 footage onto the linear content.”

Another part of the production used Augmented Reality features to create a spectacular effect. Together with Hans Cromheecke and Maarten Francq, MalfMedia has been experimenting with Augmented, Virtual and Mixed Reality for several years.

“Our experience with AR drove us to use this show as the perfect project to introduce a world first: embedding 4K multicam AR as part of the main screen graphics,” Michael explains. “This meant that the audience didn’t need to look away from the stage to see the AR graphics on a side screen nor was there any need to whip out an extra device like a smartphone. It allowed us to push the boundaries of what was physically possible in a large arena like De Kuip. At the start of the show as the band played and everybody expected Marco to appear on stage we had him appear on the roof ridge instead. It took the audience a few seconds to figure out that the 3D figure dancing on the roof was actually AR, then he jumps down and flies onto the stage in AR.

For the AR content lead operator Hans Cromheecke and systems integrator Maarten Francq used disguise's gx 2 as servers that would be best suited to carry the AR and MR content.

“Every high-level production around the world is looking for ways to exceed expectations, to provide the audience with an experience they have never seen before. With this show we managed to do that by seamlessly integrating multicam 4K AR into the graphics. That meant the ultimate in audience participation because by using the venue as a canvas and having the audience be part of the AR graphics, they were transported onto the main screen and unknowingly became part of the content for those few songs that we used it on.”