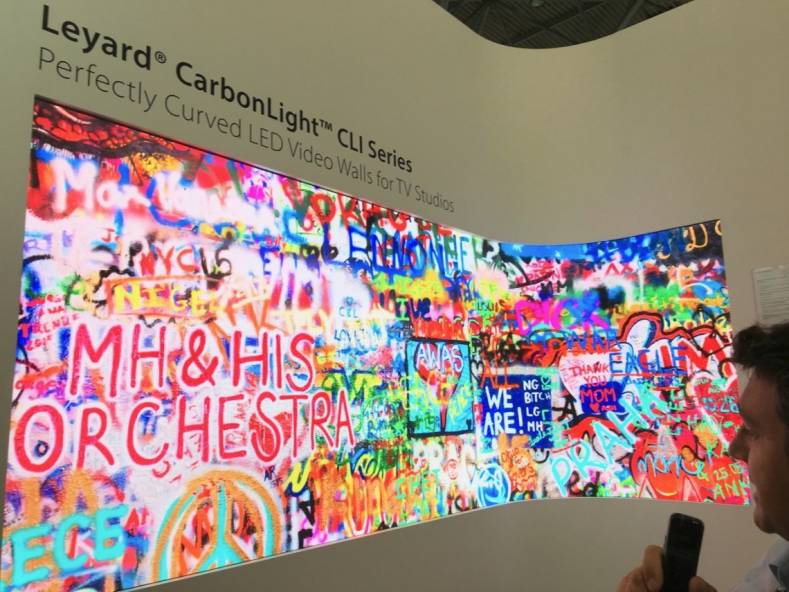 You can almost lose yourself in the vibrant colors of Leyard's curved LED display.

Leyard brought music to the eye with its parade of LED, LCD and OLED displays at IBC 2019.

One of the most eye-catching video displays I saw during the IBC2019 experience curled itself sensuously around the corner of the Leyard booth in Hall 11 almost as if it had been poured in place. 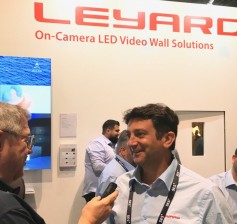 “The products we have brought to Amsterdam are the ones we think will be the most popular for the broadcast market,” began Thomas Guillot, product director EMEA, Leyard. “They start with our TVF, and we are showing here for the first time our VF 1.2 on-camera display that has been designed specifically to defeat the problem of moiré patterns.”

Since moiré patterns are created when an object being photographed contains repetitive details that exceed the sensor’s resolution, Leyard defeats them with very fine pixels in its on-camera displays, in this case down to 1.2 millimeters in its TVF line.

“We have noticed that TV studios have corners,” Guillot said, “and how do you handle corners? With curves. So that’s why we came out with our fine pitch CLI Flex bendable LED modules.”

Guillot said that Leyard was not only the leader worldwide in LED display sales, but, among other technologies, was showing their Planar LookThru Transparent OLED Displays for the first time in Europe.

“This display is see-though when you have a black image in it, but less transparent when the object is in bright colors,” he told me. “That gives display designers a whole new range of installation options.”

The amount of light coming through the Transparent OLED Displays varies with the objects inside.

And for those who dream about dancing on keyboards, or Tony Manero’s disco dance floor from “Saturday Night Fever”, they also had LED on-floor screen displays that were not only strong enough to walk on, “You could drive a truck over them,” Guillot assured me. 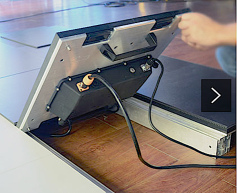 I’ll take his word for it.