In a multi-disciplinary subject such as color space, it is hard to know where to start. John Watkinson argues that the starting point is less important than the destination.

Color spaces can be visualized as three-dimensional volumes, because they have to define, for example, brightness, hue and saturation. If each dimension can vary over a fixed range or gamut, according to some varying voltage or some binary code, the available volume will be a cuboid; a fancy term for a box. There appear to be many different color spaces, but there are only two fundamental types. The first type defines the range of colors the HVS can see; it might be called a pyscho-optical color space. Such color spaces may be optimized to understand or predict what is going on, independently of any technology. The second type defines the range of colors that are available in some specific imaging technology such as printing, film, computers or TV. Such color spaces may be optimized for broadcast or transmission efficiency. Most such spaces are smaller than that of the HVS so that some colors the HVS can see cannot be reproduced. Transmission color spaces tend to get larger as the technology advances, whereas the HVS stays much the same.

The problem with color spaces is that many don't have a regular shape and in order to describe them with three-vectors (x,y,z, for example) we have to create a space that is larger, so as to guarantee to embrace any visible color or to embrace how it might be encoded in any present or future technology. Packing an egg or a tetrahedron in a square box gives an idea of the problem; there is some space left over in the box. Any time there is space left over, it means that some combinations of three-vector are not realizable. Some explanations call these non-realizable combinations "virtual colors". They are not: if I can select 32 combinations with five bits, then I can specify all 26 letters in the alphabet with a few codes left over. Is letter no 27 a virtual letter? No; it's meaningless.

If three binary numbers specify the location in the cuboid, the system has the information capacity to explore the entire volume, although non-realizable combinations will never be sent. This makes the information redundant and consequently inefficient, although a compression system could in principle identify the redundancy.

If a lot of people are tested and their ability to see color is averaged, then it should be clear that there is really only one outcome. As will be seen, the different psycho-optical color spaces are just different ways of putting the HVS volume in a box or mapping it on to surfaces that allow different aspects better to be visualized. For example, one of the CIE color spaces is linear, which means that if any two colors in the space are specified, further colors that result from mixing them will be found on a straight line joining them. Some other color spaces don't have that attribute. 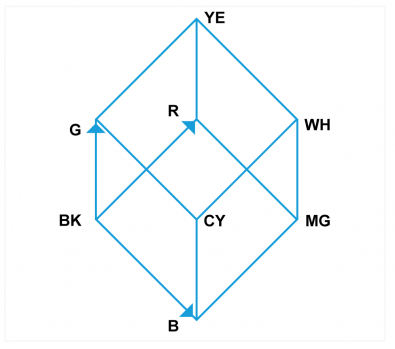 Fig.1 RGB space can be visualized by making the three components mutually orthogonal so that they are represented by the magnitude of vectors from the origin. The vectors are shown arrowed. Pairs of primaries produce magenta, cyan and yellow. All three produce white. Additive mixing starts from black and adds light. Subtractive mixing starts from white and filters out light.

The color spaces of real imaging technologies are smaller volumes that fit inside the HVS space. There are many of them, all of which embrace white, but they vary in how far away from white it is possible to get. The RGB or tristimulus format was used to research the limits of the HVS, and TV signals are in that format for at least some of the time. It seems reasonable to start with RGB as it is possible to move on to the other color spaces used in television and printing and then to the spaces used by color science. RGB works on additive mixing. If I were talking to painters or printers, I might not start with RGB as paints and inks work using subtractive mixing. As will be seen, it doesn't matter where you start because there is only one goal: satisfying (or fooling) the HVS.

The Red, Green and Blue signals can be thought of as representing the three dimensions of space so that we can have three axes that are mutually at right angles, one for each primary color. Fig.1 shows the resulting cube. Clearly when all of the primaries are zero, we get black at the origin. If the primaries are normalized, when all of them are unity, we get white diagonally opposite black. Three more corners of the cube result from a single primary having a value of 1 with the other two at zero. The remaining three are the results of pairs of primaries having a value of 1 with the third set to zero. They are cyan, magenta and yellow.

The familiar color bar test pattern has eight stripes, and our color cube has eight corners. The corners of the cube can only be reached by primaries that are 1 or 0. As there are three primaries that can be 1 or 0, that is effectively a three bit binary number which, surprise, surprise, has eight combinations from 000 which is black, to 111 which is white. The color bar signal was digital from the outset.

We can arrive at any point inside the cube by starting from black and selecting appropriate values of R, G and B. In a typical display, those three signals would determine the amount of light emitted by each primary. However, instead of starting from darkness and adding primary colored light, we can also reach any point in the cube by starting with white and removing some of the spectrum using filters. That is how subtractive mixing works in painting, printing and traditional film. Each filter takes away some of the spectrum of the white light. The subtractive primaries live on the three corners of the cube between the additive primaries. A cyan filter passes green and blue but blocks red; a yellow filter passes red and green, but blocks blue; a magenta filter passes red and blue, but blocks green. The subtractive primaries, used in film and in printing are therefore cyan, magenta and yellow.

Suppose we want to print something green. Considering the cube in Fig.1, to get from white to green, we have to take away red and blue. A cyan filter will block red but pass blue and green, and a yellow filter will pass red and green. The combination of the two will block red and blue, passing only green. Thus, in subtractive mixing, cyan plus yellow gives green. In theory, cyan plus magenta plus yellow gives black, because everything is taken away. In practice, as pigments and inks cannot be made or deposited as accurately as electronic signals, cyan plus magenta plus yellow gives varying shades of mud, so in real printing, there will also be a black pigment to get real black. This also saves ink in printers. CMYK also has the opposite polarity to RGB. White is obtained when C=M=Y=K=0. The bigger the subtractive primary signals, the more ink is used and the darker the result. 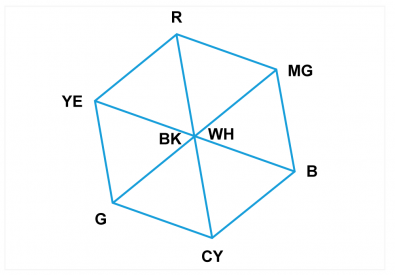 Fig.2 The RGB cube is shown viewed along the B-W axis. The six remaining cube corners correspond to the screen of a TV vectorscope displaying color bars.

While an ideal additive system and an ideal subtractive system would produce the same result to the HVS, a spectrometer would know which had been used. The subtractive picture could contain all visible wavelengths, having started with white light, whereas the additive picture would only contain the wavelengths of the primaries. It's remarkable that metamerism allows us to see colors created in such different ways; pigments of the imagination.

If we decide that R, G and B must be identical, which means that C, M and Y must also be identical, then the result is a gray scale from black to white that traverses a diagonal of the RGB cube. In other words identical components means there is no color. That allows another way of thinking about the RGB color space. The position on the B-W diagonal can be described by a signal called luminance. Luminance is the linear light version of the signal we need to drive a black and white TV. In printing, it determines how much black ink to use.

Starting with normalized RGB used in the color cube above, we could add 0.33.. R, 0.33.. G and 0.33.. B (they must add up to 1) to obtain the luminance signal. The luminance signal has more uses than just rendering a black and white signal. By making the B-W axis vertical, things get interesting. Fig.2 shows the RGB cuboid looking along the B-W axis. B and W are both in the center, and the remaining six corners of the cuboid form the familiar hexagon seen on a vectorscope. What the transform has done is to convert from RGB space, where brightness, hue and saturation are encoded into all three components, to a space where the luminance axis is orthogonal to a color plane. Leaving the center of that plane causes saturation to increase with radius. The direction determines the hue. One reason to do so is that the HVS sees detail mostly in brightness changes and cannot resolve detail in color changes. By separating luminance and color information, we can use full bandwidth for the luminance to render a sharp picture, but we can reduce the bandwidth of the color information without any visible effect. It's important for television, but not necessarily for other applications of colorimetry, such as paint matching.

Steeven Petitteville’s background in cinematography begins with the sort of story that many people would like to be able to tell. Petitteville didn’t finish studying at the ESRA film school in Paris, having become too busy working in the…