Saramonic has introduced the Blink 500 ultracompact 2.4 GHz wireless clip-on microphone system designed for film and videomakers, journalists and content creators. The system can record two channels from separate transmitters to a single receiver.

Saramonic's Blink 500 system works with DSLRs, mirrorless and video cameras, smartphones and tablets, allowing users to simultaneously record broadcast quality sound from up to two microphones wirelessly. There are a variety of receivers, which can plug into any device. A tiny receiver with a Lightning connector connects to iPhones.

The Blink 500 systems are compact and lightweight. The transmitter features a built-in microphone that captures voices perfectly. The device is small enough to clip to a shirt or slide into a pocket, and versatile enough to set on a table or podium or use handheld. It also operates as a traditional bodypack transmitter with the included SR-M1 professional omnidirectional clip-on lavalier microphone. 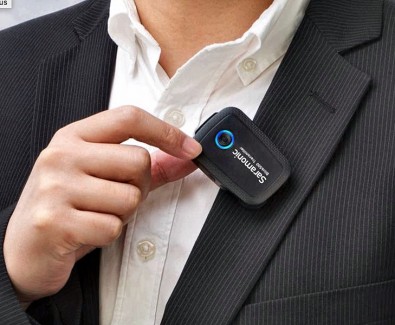 The Blink 500 operates on the 2.4GHz spectrum and automatically hops channels to avoid static noise and audio dropouts. Pairing the transmitter to the receiver is simple, and all of the complicated aspects of using wireless microphones happen in the background.

In the Blink 500 B1 & B2, both TRS and TRRS output cables are included so the system will work perfectly with devices that have 3.5mm jacks.

The Blink 500 B3-B6 plug directly into a mobile or computing device for fast recording.