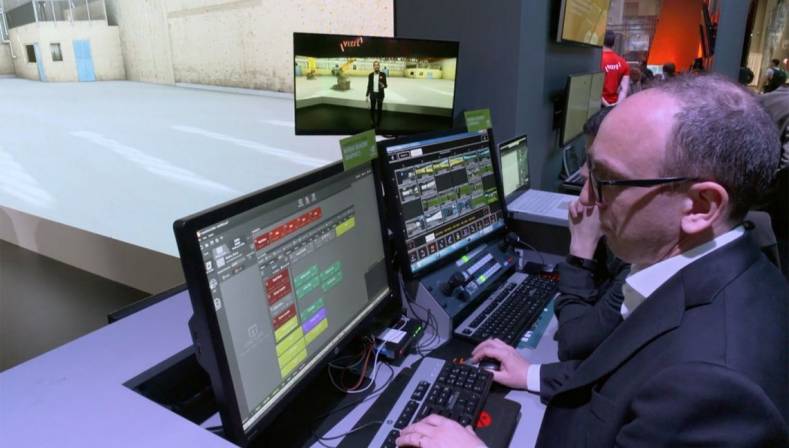 Now that Vizrt is fully integrating NewTek technology into their product introductions, this formerly graphics powerhouse is charging into the live production field. 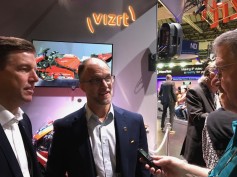 The Vizrt exhibit at IBC 2019 was brimful with four new storytelling products geared for live production.

“A lot of our focus historically has been for graphics,” James Stellpflug, product director-Americas for Vizrt began our interview on the floor of Hall 7 in the RAI Convention Center, “and this year we are showcasing the highlights of our new Viz Engine 4 empowering four new production control, workflow and automation systems.”

“Viz Arc provides customizable live control for driving Viz Engine 4,” Stellpflug told me, “whether that be for chroma keying, rich virtual studios, or controlling all the different Augmented Reality objects and virtual set extensions that are created for today’s live production studios.”

Viz Arc is a free tool that ships with Viz Engine, although there is also a full paid version for more in depth features.

The second new product Stellpflug brought to my attention was Viz Helix, what he described as a workflow orchestration system designed to automate frequent production processes. It’s built around the Viz One media asset management (MAM) system.

“Viz Helix utilizes metadata to extend the capabilities of Viz One asset management layers,” he said. “Now clients even without Vizrt components, can build their own business logic into their systems.”

The other two new products we saw from Vizrt came as a result of their recent acquisition of NewTek and its technology.

Viz Verdi can help a broadcaster’s transition to IP.

“Viz Verdi is a cost-efficient software-defined automation platform that allows media companies to efficiently produce more content on more platforms,” he told me. “Significantly, this includes repurposing live programming for social media and online outlets.” Viz Verdi fits right into the middle of the automation portfolio offered by Vizrt which began with Viz Mosart at the high end and Viz Opus on a smaller layer.”

“This incorporates the best-of-breed technologies we now have access to,” he said. “Viz Vectar can natively support digital media aspect ratios and formats, enabling simultaneous delivery to multiple screens.”

I was especially fortunate that at this point the president of the company, Daniel Nergard, joined the conversation to explain the company’s new marketing direction.

“We are now bringing three brands to the digital creation community: Vizrt, NDI and NewTek,” he said. “Since we are convinced that IP is the future of production, we have given the NDI products their own brand name. This approach will let us bring our IP knowledge and development teams together to help move the industry forward. Our launches to day of the Viz Verdi and Viz Vectar software products are key examples of this.”