Like many vendors at the show, MediaKind has put the consumer at the center of its multi-device, multi-screen platform for content delivery.

At the 2019 IBC convention this year it was clear that the consumer is king and, for broadcasters and content delivery platforms, reliably serving that on-demand ruler with hyper-adaptable operations that can reach many platforms simultaneously could secure the keys to the successful-business-model castle. In fact, this year’s conference theme—appropriately entitled “Consumers First: A New Era in Media”—represented a changing view among broadcasters: from “if you build a channel they will come” to “deliver those channels to wherever they are.”

To accomplish this, the move to IP-based infrastructures and so-called “micro services” is critical to allowing international broadcasters to serve their viewing audiences in a myriad of ways—at the behest of consumers themselves. By now the benefits of IP are well known. OPEX can be lowered drastically through the use of less-costly cabling and commodity hardware, and the unbundling of hardware and software solutions (or “virtualization”) will enable operators to source software from many different vendors.

Remotely controlled (“At Home”) production has also become a new reality thanks to this new paradigm shift in signal transport and control, lowering costs and stimulating the coverage of a wide range of mid-level live sporting events.

Surveying many of the various vendor solutions displayed on the exhibit floor, the recurring message was developing infrastructures and workflows that offer a consistently positive and reliable quality of service for the new generation of online viewers. An Ofcom survey released at the show stated that half of UK homes are signed up to TV streaming services, with YouTube and Netflix now that country’s third and fourth most viewed channels, behind only BBC One and ITV. Linear broadcasting still leads the market in terms of viewership, according to Ofcom, the UK's communications regulator for television broadcasting and telecommunications.

[In the U.S., streaming service Roku just released a 2019 Cord Cutting study that predicts approximately 60 million TV households are expected to access video on their TV exclusively through streaming within the next five years. If this happens, for the first time, streamers will surpass traditional Pay TV viewers.] 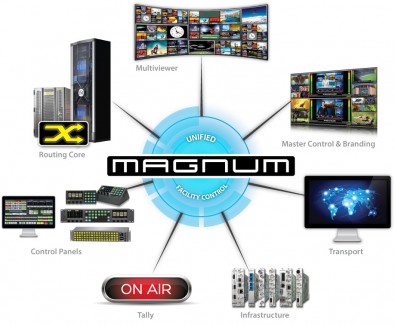 However, it was also evident that for system engineers this migration will not be as easy as some have made it out to be. Yes, cloud technology will bring broadcasters new scalability and reach to deliver content to multiple consumption platforms and geographic regions of the world. But reconfiguring cost-effective workflows to meet these new consumer demands will take careful thought and a retraining of staff to be well versed in the design and maintenance of IT systems and content as data.

“Broadcast engineers now have to solve latency issues, packet loss and the reformatting of content on the fly, things they never had to before,” said Mo Goyal, Senior Director, International Business Development – Live Media Solutions, at Evertz Microsystems. At the IBC show his company showed an expanded portfolio of its SDVN (Software Defined Video Networking) infrastructure products that facilitate multi-platform operations.

“What we’re seeing is that it takes a lot of hard work to relearn the language of audio and video in today’s highly competitive world,” he said.

Helping to stimulate this IT-centric adoption is the release of The Networked Media Open Specifications (NMOS) by the Advanced Media Workflow Association (AMWA), which are now being deployed, used in IP-based infrastructures to provide a control and management layer in addition to the transport layer provided by the SMPTE ST2110 standard. The idea is to make the interconnection of products from competing suppliers as simple as possible. Now that the transport layer is well established, AMWA said it is now focused on easing deployment for end users.

In addition, the Joint Task Force on Networked Media (JT-NM) issued passing grades to a number of vendor products tested as part of the IP Showcase at the 2019 NAB Show in April. This allows prospective purchasers of IP-based equipment to gain a better-documented insight into how vendor equipment aligns to the SMPTE ST 2110 and SMPTE ST 2059 standards. Testing for the JT-NM-sponsored program was administered by the EBU and IRT — two top European technical bodies — at an event that was held the week of March 18 at the Fox Networks facility in Woodlands, Texas. Winner of this certification displayed a “JT-NM Tested” badge in their respective exhibit stands at the IBC Show.

Standards aside, these inherent complexities are causing many to hesitate in taking a full dive into the IP world.  Instead they are moving slowly by augmenting their current SDI-based systems with IP gateway products that can be used to migrate in a multi-phased approach. Large content delivery networks like Amazon, The Walt Disney Company (ABC), Comcast (NBC), Netflix, Turner Broadcasting, the Fox Network, the BBC, France Television and TV2 in Norway (and many more) are now all well on their way using this strategy and are finding success by launching new OTT services to attract viewers eyeballs. 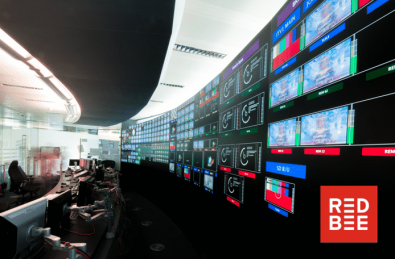 Also at the IBC, Walt Disney (owners of the ABC Network in the U.S.) announced a new deal to use Microsoft's Azure cloud services to help it launch Disney+, a new streaming platform that will debut in November to compete directly with the likes of Amazon and Netflix. Avid will work with Disney to develop new types of media workflows, such as collaborative editing, archiving and storage all accessed from the cloud. A press release stated that it was working hard to adapt to the way consumers interact with “cloud-native” content.

Jamie Voris, CTO of The Walt Disney Studios, said in the announcement that the studio would move production and postproduction workflows to the cloud in order to find new ways to "create, produce and distribute content." He said it would accelerate physical production, particularly in a realm with large media files, which take time and storage capacity to render and upload.

Broadcasters also continue to outsource their playout services to international centers, like The Broadcasting Center Europe (BCE), located in Luxembourg; Qvest Media, In Cologne, Germany; and Red Bee Media —with 10 playout centers globally—which have themselves moved to cloud-based services (e.g., playout, ad insertion, transcoding, etc.) in order to maximize their facilities and offer new and better services. From ingest to storage and all the way through to transmission, these companies’ main infrastructure, and the way they conduct business, is now entirely IP based. They’ve helped many broadcast clients move content delivery to the cloud and on to consumers, both as a managed service and as a systems integrator.

“Software and the cloud allows us to help clients scale up and down new channels in ways that was far too expensive and time consuming to do a few years ago,” said Margaret Davies, Head of Sales Enablement at Red Bee Media, which has built its own private cloud (based in London). “Clients want to focus on the creation of content and less on how it gets delivered. That’s where we come in.”

As yet another example of the power of IP, France Télévisions is using Nevion’s VideoIPath network management and services system to oversee its nationwide IP contribution network. The French public broadcaster has more than 100 sites located around the country that are all connected with 10 Mbps to more than 100 Mbps links to facilitate real-time contribution. 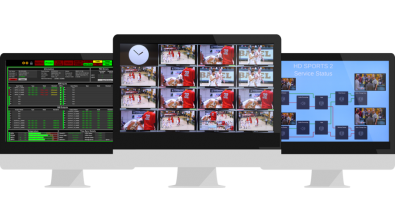 Grass Valley’s new Orbit is a suite of software packages and plug-ins that provides scalable configuration, control and monitoring to any media installation.

Some of the noteworthy technology shown at IBC that allows a user to migrate slowly included a new shoulder mount 4K camera from Panasonic (the AJ-CX4000GJ) that allows images captured with the camera to be distributed in HD mode to internet live streaming services. A LAN terminal on the camera features a lock mechanism (compatible with 1000BASE-T environments) and also supports NDI|HX connectivity to bring content directly into an IP production environment with minimal transcoding.

So, according to most vendors at the show, the IP transition is moving more deliberately now and at a faster rate around the world than it was two years ago. The highly competitive landscape of new content services being introduced, both in the U.S. and abroad, is prompting this newfound urgency. Broadcasters will have to learn to serve today’s ever-demanding consumers and become comfortable with this new way of working in order to remain financially viable.

“There’s a lot to learn about IP infrastructures, but also a lot to gain,” said Mike Cronk, vice president of Core Technology at Grass Valley. At IBC the company—along with others like Panasonic, Sony and others—straddled both worlds, showing a wide range of cloud-based signal processing systems—like the new GV Orbit, a unified configuration, control and monitoring system—in addition to a line of SDI-based 12G equipment.

“With each new installation we do, we’re figuring out how to deliver content to the consumer, wherever they might be, in the fastest and most cost-efficient way,” he said. “Everyone knows IP is the future. How fast the industry completely gets there is anyone’s guess. But we all need to get there to help broadcasters achieve their business model goals.

Editor’s Note: This year the IBC Show in Amsterdam attracted 56,390 attendees, according to the IBC, which represents a slight increase from 2018’s 55,884 total.