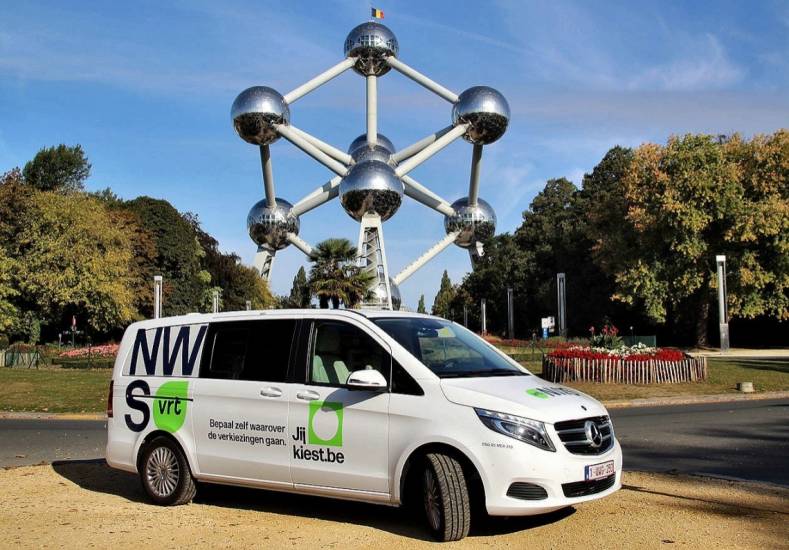 Broadcast Solutions will show an ENG van recently delivered to Belgian public broadcaster, VRT, at their outdoor stand at IBC.

The van is one of seven new vehicles for VRT. It is heavily used in the field for the news program VRT NWS and to fulfill VRT’s approach to develop new news formats.

Broadcast Solutions said the van is based on a Mercedes V-class and was adapted to meet VRTs wishes in terms of broadcast technology, data transmission, interior design concepts and independent power supply solutions.

The concept of the van is to give the teams in the field as much flexibility as possible to produce on-site or on the road. The concept allows for two people to work even when the van is moving.

When driving to a location the editors and journalists can prepare the piece they are about to shoot. In the same way they can edit and playout material right away after shooting a feature, before reaching the VRT facilities.

The basic broadcast equipment used in the van is an Axon video router and multiviewer, a DHD audio console with Genelec monitors plus a workstation running Adobe Premiere and several storage cards.

For data transmission, Pepwave LTU transmitters were integrated as well as a TNG system plus a LiveU200 for camera mount use. The van is equipped with a dedicated power generator included in the van and lithium ion batteries to enable up to five hours autonomous activity.