EditShare has combined its editing experience from Lightworks with its storage expertise from Flow to create a remote editing application called Flow Story now enhanced by AI.

EditShare has a well-heralded history in editing as the creators of the Lightworks NLE with which Thelma Schoonmacher has edited almost all of Martin Scorsese’s feature films.

And what is amazingly cool is you can download a version of Lightworks for your own use for free, limited only by the restriction of outputting just to YouTube or Vimeo at 720P.

Now, as Matt Sandford, product manager for Lightworks and Flow at EditShare was good enough to let me know, they have come up with Flow Story.

So they’ve taken its storage expertise through the Internet, combined it with the editing heritage of Lightworks, and come up with Flow Story for remote editing to meet fast turnaround requirements.

“Story is based on Lightworks technology with a similar UI and feature set,” Sandford began, “but it is designed to be a browser-based, remote editing and logging application.”

“Story” (which seems to be the product’s nickname) is designed for jobs like news and sports production where time is of the essence and the goal is to cut packages and get them streamed back to the studio as quickly as possible. 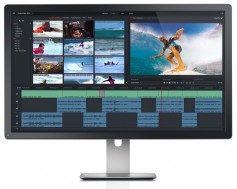 Flow Story can handle just about any video format in production.

As Sandford told me, it supports literally hundreds of formats, from professional broadcast codecs such as Apple ProRes, Avid DNxHD, Panasonic AVC-Intra and Sony XDCAM, through to 4K and beyond, such as RED R3D, XAVC, Cinema DNG and DPX.

But as in many aspects of our modern post production world, Flow Story is going to benefit greatly from the inclusion of Artificial Intelligence (AI) capabilities.

“These will come in the ability to give us audio transcriptions,” Sandford said, “and instead of developing our own speech-to-text capabilities, we are putting a lot of energy into getting our systems ready to accept as many third party audio transcription services as possible by the time we roll this out at IBC.”

Sandford sees the future of AI in editing as opening up exiting possibilities.

“Imagine being able to open up a clip bin where all the B-roll shots are already logged based on AI’s recognition of their content,” he said. “You could even have people recognized not only by their face, but actually by their emotional state. That could be very applicable for productions like Reality TV line ‘Big Brother’ where they are always keeping track of how their participants are feeling and reacting.” 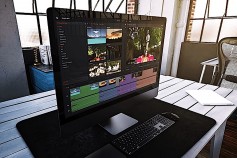 It all comes back to the central PAM system, Flow.

Of course, Sandford recognizes that, to be useful, AI has to be taught.

“After all, AI is still governed by the rules and procedures of the world it is living in,” he said, “so human information is still going to be a major part of its intervention.”

This is all future stuff, Sandford stipulates, and he would be very reticent to remove the human element. He sees AI’s proper role as freeing humans up to have more time to be creative.

“New systems like Flow Story will give people more tools to use in the field,” he finished up, “and we hope to be able to present them with audio transcription capabilities at IBC. But any AI manifestations will only be in service to the human creativity involved, because after all, that is the point.”