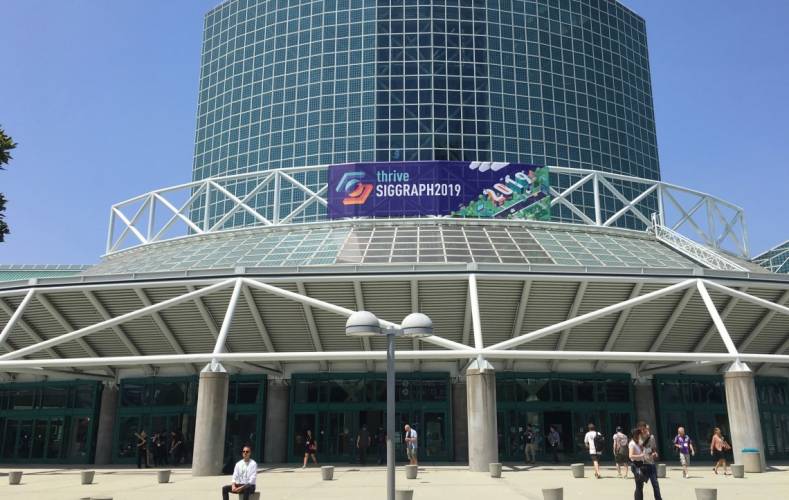 SIGGRAPH - the stuff that dreams are made of.

SIGGRAPH attracts those who are building visions of tomorrow with the computer graphics tools of today.

The annual SIGGRAPH convention, which this year enjoyed its highest attendance since 2013, welcoming 18,700 global professionals, is more than a display of new technology and an opportunity to attend sessions discussing the latest in computer graphics and artistry. Its overwhelmingly youthful attendees see it almost as a mystical journey where imagination meets aspiration since the most important thing on everyone’s mind is the next c.g. wonder that has not been developed yet.

As I wandered through the exhibition area that filled Halls G-H of the Los Angeles Convention Center during the middle three days of the July 27th through July 31st event, the thing that struck me most was the number of “Positions Available” signs on the booths. Truly, this is a segment of the Media & Entertainment industry that is booming with opportunity. 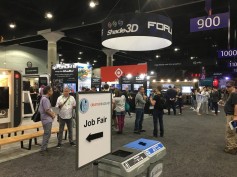 Here is some of the mind candy that caught my imagination.

Alexander Alvarez, int’l director of marketing at Noitom (that’s “motion” spelled backward, get it?) is convinced his company has taken the sensor technology of motion capture one step beyond. 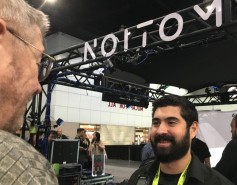 “Already, by using small sensors comprised of gyroscopes, magnetometers and accelerometers inside actors’ suits our internal algorithm can completely mimic a human skeleton that can be put into any 3D rig for film, animation or robotics,” Alvarez told me.

But what they were unveiling at SIGGRAPH 2019 takes it a level further.

“We have added optical markers that we have put inside the sensors. This prevents occlusion when the other sensors are blocked and lets you reduce the number of cameras needed to capture a VR scene.”

To get the public to accept Virtual Reality as a human experience, Dexmo Robotics has developed an amazing glove that gives you multiple levels of haptic feedback from the virtual objects you think you are touching when seen through an Ocular Rift helmet. 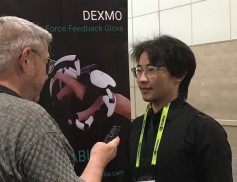 “We are building the next generation of interactive technology,” Aller Gu, the company’s CEO, explained to me. “We are using a combination of force feedback, temperature feedback and seven points of tactile feedback so you can tell the difference between the feel of disparate surface contacts.”

The glove they were displaying could actually distinguish the difference between touching wood or touching granite. 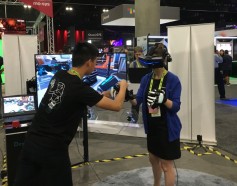 “There is a spring-y consistency inherent to specific surfaces,” Gu said. “Or, in the case of pushing a button, the finger needs to know the difference between forcing the button down and making it click at the bottom. We call it ‘multiple stiffness layer simulation’.

“Just as the visual GUI of Apple’s Mac opened computers to the average user, we feel this kind of tactile interface with VR will spread the technology far beyond the gamers arena,” he said. “It will define the way we interact with our future digital world.”

At the CGTrader exhibit, marketing director Michael Swack told me they had the world’s largest collection of over 830,000 3D product models artists could license from their site.

But recently, they have begun to get into retail, with their CGTrader ARsenal (“AR” for Augmented Reality). CGTrader's Michael Swack talks with Jay at their exhibit

“CGTrader lets customers experience the way retail products will look within their own home environment,” Swack told me. “The idea is that the seller sends an image of their product, let’s say a sofa, to the CGTrader Web site. Then it gets turned into AR, and the consumer can dial it up on their mobile device, point their camera at their home setting, and see how that sofa will look in AR within their living room. You can rotate it, look from above, turn it on its side if you want. It helps the consumer make the decision in context before they buy.”

Some people do actually take a lunch break during SIGGRAPH, and if you are lucky you get invited to the JPR Luncheon at the nearby JW Marriott Hotel hosted by Jon Peddie Research where some insider stats about the computer graphics market are revealed. 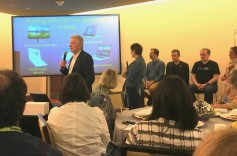 This year we learned that this unique market experienced rapid growth from 2013 to 2016 and “has continued to wobble up since.”

Growth has slowed to an average of 2% CAGR (Compound Annual Growth Rate) “but at $150 billion a year that’s not trivial.”

The report also said that, “The main point of exploration for VR today is in content creation where it is used for virtual production, a glamorous but tiny market, for professionals, its traditional market.”

But then, for those who prefer VR goggles to green eyeshades, it was back to the alternate reality environs of the Convention Center’s Exhibit Hall.

More in Part II, where I finally come face-to-face with a real live, self-standing 3 dimensional hologram. 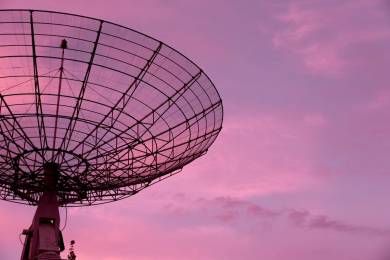 In this thought-provoking missive, Gary Olson delivers his predictions and insights for IBC 2019. 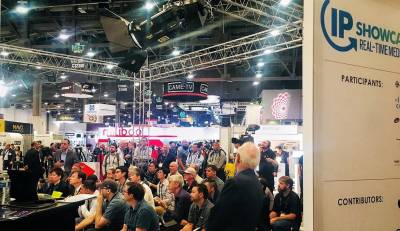 From theory to implementation, this second year of the IP Showcase and Theater at IBC2018 is should be on everyone’s schedule.