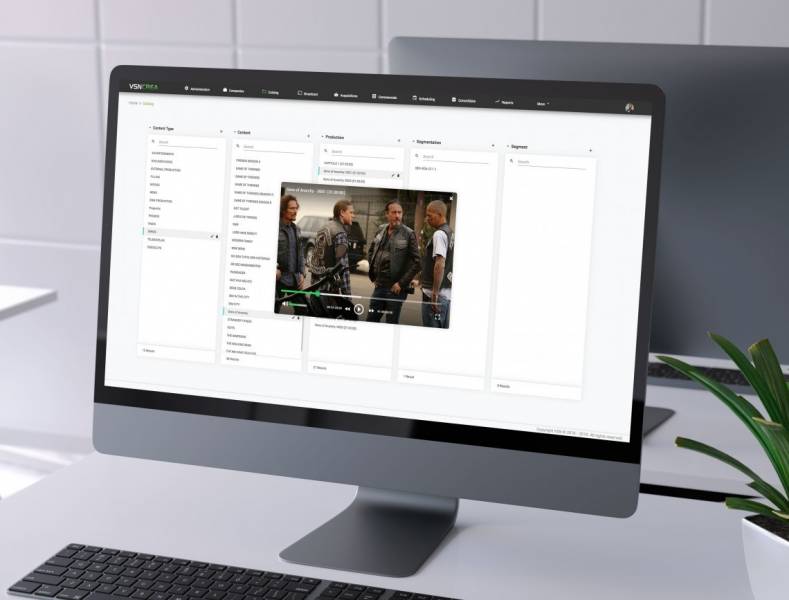 VSNCrea is a cloud-based solution for traffic and scheduling

Highlighted will be the VSN NewsConnect web plugin for news and live production and an intelligent advertising planning module.

“With VSNExplorer, we are moving away from the traditional MAM focus purely on video management to target emerging requirements such as providing the ability to easily preview and manage images, audio or any other type of file,” Patricia Corral, Marketing Director, VSN. “The result is a solution that is far more in tune with the new realities of media asset management.”

NewsConnect is presented as the first web plugin for a MAM system that allows for the full customisation of a news production work environment, bringing together third party tools and making them all accessible through the NRCS interface.

“There are many benefits in moving from a multiple interface environment to the single interface approach that NewsConnect uniquely enables,” said Corral. “Most importantly, it reduces the time spent in creating stories. Journalists and editors now have simple, fast access to the tools that enables them to write their news pieces; locate the video files needed; edit them - including voiceover and CGs; see how the final news piece will look in real-time; and send those news pieces to broadcast or web and publish to social media from almost anywhere in the world.”

NewsConnect allows the visualisation of all the assets and videos stored in the VSNExplorer MAM system – from within the interface of the large majority of NRCS systems including Annova, ENPS from AP, Inception from Ross Video and Octopus. NewsConnect is now also interoperable with iNews from Avid.

“The interoperability and compatibility of NewsConnect enables our customers to handle their news requirements in whatever way suits them best,” continued Corral. “Any media channel/company can decide which systems they want to use when producing their news without having to worry about those systems not integrating well with each other – because, as long as they are MOS-compatible, NewsConnect offers them the flexibility to make news their way.”

The new advertising planning module is for VSNCrea, VSN’s cloud-based solution for TV, radio and second-screen traffic and scheduling. The module facilitates the management of ad campaigns, allowing users to define time slots – such as children’s programming – for content and broadcast control. It also allows prime time broadcasting rules to be defined and time-slot pricing to be managed.

“For instance,” explained Corral, “a user might want to create automated settings to avoid the repetition of a commercial, or to prevent a commercial for alcohol appearing during children’s programming. Users can now automate the planning of their advertising schedule as they like.”

VSNCrea is now integrated within the VSNExplorer MAM, meaning that the user does not need to switch back to VSNExplorer in order to make changes. A typical advantage of this would be a user wanting to view and edit a frame from a short item that has already been added to the playlist. The user can now see the preview and edit directly within VSNCrea without having to revert to VSNExplorer.

A further enhancement to VSNCrea is the addition of ‘bidirectionality’: changes made in VSNCrea are automatically replicated within VSNExplorer MAM.

“Because it is based on HTML5, VSNCrea can be used from any web browser or device by multiple users simultaneously, allowing them to organise and control the entire channel’s programming at anytime from anywhere,” continued Corral. “It not only improves the efficiency and flexibility of those using it, but it can also make a substantial contribution to a more collaborative way of working.”