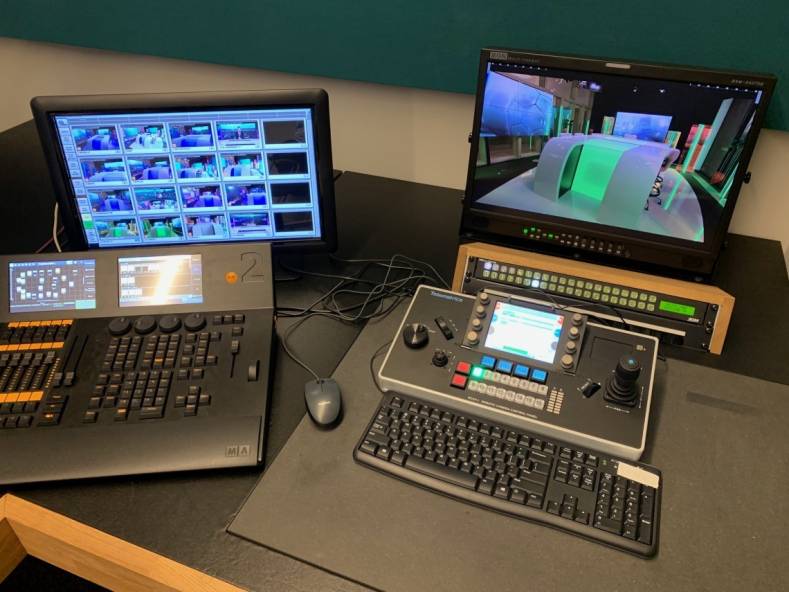 The Telemetrics RCCP-1A Robotic Camera Control Panel is the heart of the studio camera control system.

Belgian broadcaster Télésambre maximizes existing studio space by producing radio and TV shows out of the same space with a single operator.

Telemetrics has provided a complete camera robotics system for a new production studio at Belgian broadcaster Télésambre. The new studio produces news and sports programming in the French language to the country’s French-speaking Charleroi region. The new studio is used in the morning for its live radio program (Vivacité) and at noon and late afternoon for its daily TV news shows (called "Télésambre").

When management decided to build a new production studio to produce more content, it wanted to be sure to keep the studio as flexible as possible to accommodate the different programs produced during different day parts. The Telemetrics robotic camera control system gave the increasingly popular channel a reliable and consistent way to streamline its production operations, increase productivity and improve its on-air look. 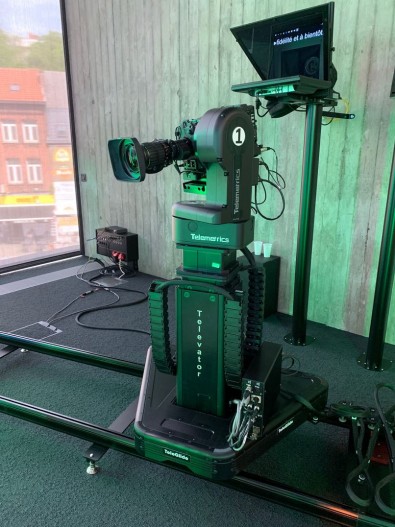 Télésambre Technical Manager Bertrand Ruelle' said that the robotics enhance the production values of his station’s varied program output and allows a small staff to run it. The live TV news show is managed and operated by a single operator, who can easily command the camera mounted in a PT-LP-S5 pan/tilt head installed on an EP7-600 Televator elevating pedestal riding on a TG4 TeleGlide camera track system, with precise control using a Telemetrics RCCP-1A Robotic Camera Control Panel.

“We are very pleased with the results,” said Ruelle'. “We were looking for a way to minimize the number of people in the control room while making more programs under a tight budget. Telemetrics' systems allow us to do just that, in more ways than one. By adding robotic cameras to the studio, we have achieved our goal of streamlining our operations in the most cost-effective way. This has led to programs that are easier to produce and more popular with our viewers. I’d say our mission was accomplished.”

Local system integration company AV Group supplied its engineering expertise and helped install the new robotic systems. Working under a tight deadline to get the new studio up and running within three months, Peter Natowicz and his team at AV Group also configured the Telemetrics systems to work closely together with an automated graphics and playout system (Live Assist and Hotkey Panel) from ChyronHego.

“I’d say the most challenging part was the short installation period we were given and the coordination of the systems, which was quite complex,” said Natowicz, adding that the Telemetrics systems were installed in August 2018 and they went on air in September of last year.