Arvato Systems launched their new MediaEditor at the NAB Show 2019, as the final part of their “Video Production Management Suite” (VPMS). As Ben Davenport, strategic product manager at Arvato explained to me at their tropical-themed booth in the upper level of the South Hall, this makes it “a fully featured, browser-based desktop editor”. 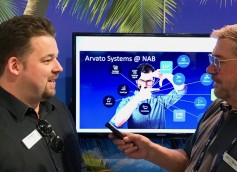 But it’s also the new cornerstone of a complete multi-level post-production package.

“This makes it ideal for social media because the end result sounds like it came from a more advanced mixing console,” he said.

Of course, one of the challenges for an NLE that is intended to use cell phone media, among other sources, is how to reconcile horizontal and vertical oriented aspect ratio images.

Davenport explained there is a simple button on MediaEditor intended to deal with this.

“This lets you select whether the final version will be square, or portrait,” he told me. “It all depends on how you want your project published.”

They have also taken into account the nasty tendency of cell phones to put out variable frame rates, sometimes dependent on content.

“That’s why we call the whole system a ‘Video Production Management Suite’,” Davenport said. “There are actually 5 modules within the product: VPMS Origin for ingest, VPMS Platform to manage content, VPMS ClipJOCKEY as a multi-channel production tool, VPMS MediaPortal from cross-platform searching, and new at NAB 2019, VPMS EditMate for seamless collaboration when editing your projects together.”

These all benefit from more than two decades of the experience of Arvato’s parent company, Bertelsmann.

They are scalable, individually deployable and open to third party systems.

EditMate has its own editing software, but Davenport told me they worked closely with Adobe when developing it and as a result its projects can easily be forwarded to Adobe Premiere for craft editing finishing.

“That way the editing requirements of a project can be tailored to the editing skills of a given user,” he finished up. “From basic to high end finishing, with this release of MediaEditor we have now completed the circle to provide the tools needed at any level of posting a production.”

Version 1.0 of EditMate will be available in June, with 2.0 coming out this summer.