Since portable video became widespread in the mid-1970s, most videographers shot handheld. Video cameras were heavy — but well balanced — and most professional shooters learned to hold the camera very steady. Now, most cameras are much lighter — often too light for handheld shooting — and gimbals, sliders, motion controllers and stabilizers have filled the void. Does this trend signal a fundamental shift in the way video is shot?

In this new era of sub-miniature cameras, shooting methods were bound to change. Camera movement is always necessary, but how to achieve it varies with the weight of the camera. Has equipment gotten so small that traditional handheld shooting is a dying art? No, but better ways are being examined to improve handheld ergonomics. 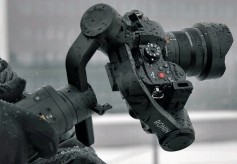 Of course, on high-end television and film production, major production tools — such as traditional camera dollys, cranes and arms — remain a staple of the industry. These devices provide exceptionally smooth movement in situations where heavy cameras with accessories are still in use.

However, for more portable production by field, documentary and news crews, camera support gear has dramatically changed and so has the typical way video is produced. In the mid 1990s, small digital video camcorders first appeared on the scene. They have gradually gotten smaller and smaller. Ways to mount them ushered in a period of change. New, compact tools based on larger gear gained popularity, but many camera operators found them too limiting for use with every shot.

Many operators missed true handheld shooting, the most effective way to get a wide range of shots quickly. This was especially true for those who once shot standalone with traditional video cameras and Betacams, which weighed under 20 pounds. In those days, cameras were mounted only on a tripod, a Steadicam or the human shoulder. Camera operators of that era were defined by their skills at rock solid handheld shooting. It became an art form that took them to the top of their profession. 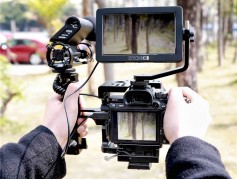 As cameras got smaller, the devices became harder to hold. This resulted in handheld footage that was less steady. Gimbals and other steadying devices did one thing well, but didn’t offer the versatility of old-school handheld shots. Many options for movement became limited as far as small cameras were concerned. The term micro jitter — the shaky movement of a tiny handheld camera — came into play. Image stabilization attempted to correct this, but didn’t do so completely.

When video cameras in the 35mm form factor arrived about 10 years ago, they became even harder to hold. Over time, many small companies developed support options for these cameras. One of the most popular current categories are small metal cages with screw holes that allow accessories to be attached to brackets. This adds weight, mass and balance to otherwise unwieldy camera packages.

Today, the search for shooting versatility of small cameras continues. It is still far from perfect, but accessory makers throughout the world are outfitting iPhones, mirrorless and DSLR cameras with an assortment of support gear to make the cameras more useful for handheld shooting. Even with all the tools available, it is still recognized that a talented operator can infuse handheld camera movement with an immediacy that most support tools cannot match.

Camera support for small devices is still in the experimental stages and new ideas come on the market almost daily. Small cameras may be technically advanced, but the human interface remains an area that needs improvement.