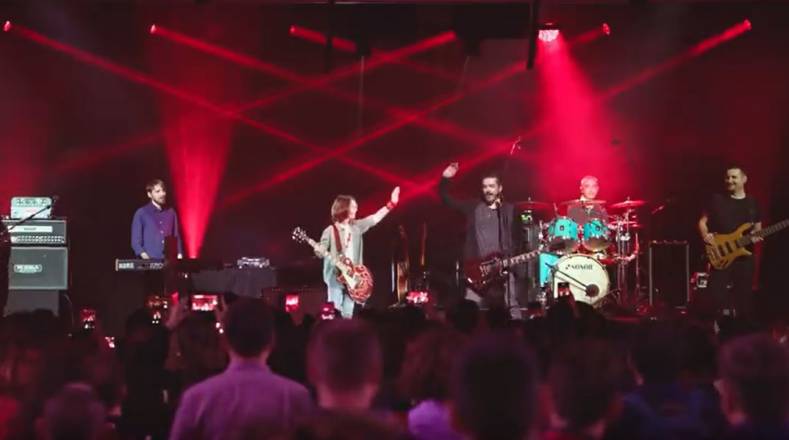 After the on-stage band and off-site hologram musician played together, they tried to high-five.

Dejero provided its EnGo mobile transmitters and receivers to deliver video links from a studio in Bucharest, from which the hologram of a 10 year-old guitarist was beamed live to a stage over a Huawei router and Vodafone 5G link.

In what is a world’s first in the area of entertainment, young guitarist Luca Mihail joined rock band Vita de Vie on stage as a hologram in a spectacular showcase of Vodafone Romania's 5G technology and Musion 3D's EyeLiner display. The event attracted thousands of fans, was live streamed on Facebook and became Vodafone’s 2019 flagship television commercial in Romania, with over 2 million YouTube views to date.

It was the second time in history that hologram technology was used for a national TV commercial. As another crucial world first, the subsequent commercial was filmed using a 5G live link from a remote location, made possible by Vodafone Romania with support from Dejero, Musion 3D, Hawthorn and Huawei.

"Key to the success of the Vodafone Romania event has been Dejero's extensive experience in live broadcasting amidst challenging conditions," said Ian O’Connell of Musion. "It's about having the confidence to get a high-quality live stream across the networks in a reliable way that creates a realistic image on stage. Any degradation in the service spoils the reality, so the combination of Dejero's reliable live expertise and Musion's stage experience made the Vodafone Romania 5G event and commercial a great success."

Musion 3D relied on Dejero's EnGo mobile transmitter for live remote contribution, as well as Dejero receivers to provide incredibly reliable low-latency, high-quality, HD video and audio links in both directions. As part of the project delivery, the Dejero transmitter and receiver were both centrally managed through Dejero Control from a web browser.

The hologram data was streamed over a Huawei router and Vodafone 5G link.

"The combination of Musion 3D and Dejero's technology and expertise enabled a spectacular live stage performance, allowing Vodafone to demonstrate that next-gen 5G networks can support more demanding, high-bandwidth content," said Todd Schneider, chief technology officer of Dejero. "5G opens up all sorts of opportunities for the media and entertainment industry. For Dejero, 5G is the next evolution of cellular network connections that we blend to provide connection diversity and greater reliability."

Musion provided turnkey production services for this event, including their unique patented flame-retardant foil, patented filming techniques, lighting and stage design together with renowned AV partner Hawthorn. Vodafone’s 5G network provided part of the link between the filming location and the on-stage concert, a world first.