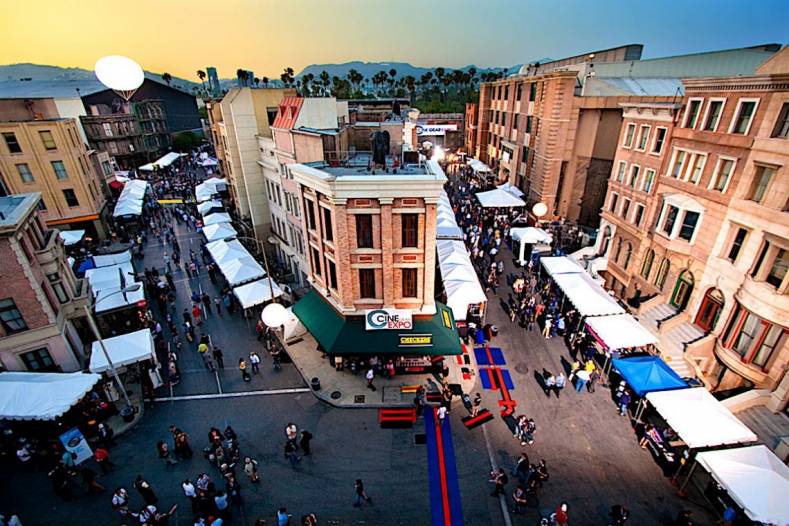 The Paramount Studios back lot was filled with new production gear and Hollywood pros, students and wanna-be’s alike who poured over the 2019 Cine Gear Expo.

The Cine Gear Expo, held each year on the grounds of Paramount Studios, is kind of a mini-NAB,although it's directed more toward the cinema crowd as befits its location in the heart of Hollywood.

But Cine Gear is about more than just cameras and lenses.

This year, from May 30thto June 2nd, the back streets and sound stages were filled with over 16,000 visitors who wanted to get their eyes on the latest in movie making gear. 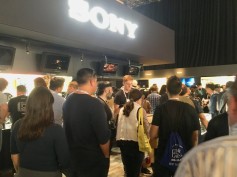 Of course, in this digital era, the lines between cinema and broadcast are as thin as an agent's sincerity.

Those of us who had recently survived the relatively broadcast-oriented NAB Convention in Las Vegas were glad to see the pillars of our industry such as Sony (in Sound Stage 6) and Panasonic (in Sound Stage 3) were well represented, but their info folk admitted they had nothing new to show over what we had seen at the desert techno-gala.

But that only left plenty of time to search out the vendors who were bringing new and innovative technologies to their friends in Tinsel Town. 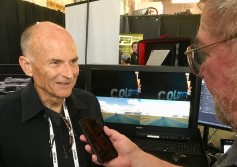 “This is the first time we have shown our Colorfront Engine Film Mode, in this case an implementation licensed to AJA Video Systems for their FS-HDR real time converter and frame synchronizer.” William Feightner, Colorfront’s CTO told me. “With the same plug-in made available to a post system like Blackmagic Design’s Resolve, that means whatever you see on set will be the same imagery recreated in dailies and in the files delivered to post.” 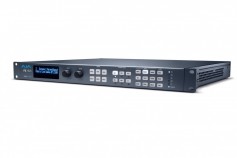 For the film world, it all has to do with establishing a Hero look for your photography and keeping it consistent throughout the production chain.

Despite the hubbub filling the sound stage, I noticed Feightner was using the term “look”, rather than “LUT” or Look Up Table to specify the desired visual parameters.

It turns out his use of the “look” concept is far more complex.

“If you have a show set for Rec. 709, it won’t work for HDR or Digital Cinema,” he explained. “What we are offering with our Colorfront Engine, on the other hand, is a procedural module. All. It takes is a simple text file that will take that Hero image from dailies through to final deliverable so that everyone sees the same manifestation of the images at every step. Instead of being a fixed LUT that nobody can iterate, with our software you only need to change the parameters to match the imagery at each subsequent step’s input and output requirement.” Outside, in the Greenwich Village section of the New York Streets back lot there was a swirl of excitement since who doesn’t like dropping expensive video monitors to see if they will smash?

That’s what Alfie Ma, general manager of Ruige (“Roo-EE-gah”), was inviting attendees to attempt, offering anyone $100 if they could crash a 21.5-inch LCD production monitor after dropping it from the height of a modest cart, about 20-inches.

I guess they have a right to take a shot at it, since Ruige first introduced TFT-LCD technology to Chinese broadcasting back in 2001.

“Our new monitor called ‘Action’ has been designed for both outdoor and indoor production,” Ma told me. “This AT-2200HD 21.5-inch model has a rugged aluminum alloy chassis and weighs just 21 pounds. The case protects the monitor so well you can stand on it. But most impressive, we are showing here that you can drop it from 50 centimeters, twice the industry standard.” 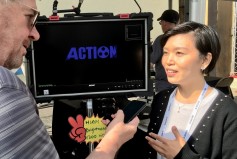 Jay Ankeney from The Broadcast Bridge and Alfie Ma, gm of Ruige

And true to her word, Ma invited anyone to come up and drop the Action monitor from a height of 50 cm, offering $100 to anyone who could make it break.

Needless to say, nobody walked away with the prize. Over on the Brooklyn street, SmallHD was showing off their daylight viewable monitors, 1303 HDR 13-inch and 1703 P3X 17-inch, with built-in Teradek transmitters/receivers.

“These are a joint effort between SmallHD and Teradek”. Stewart Garner, Sales Rep for SmallHD explained for me. “We’ve combined our monitors with Teradek Bolt sidekick receivers, famed for their secure signals Both put our 1500 nits of brightness so you can see them even in the hot L.A. sun, and the people here at Cine Gear have given us great feedback.” 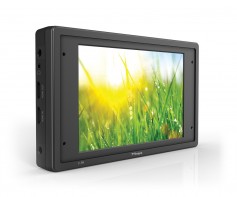 I headed down to the Lower East Side of the New York Streets district to meet with Jin Lee, sales manager at TVLogic, where they had the industry’s brightest field monitor, the F-7H mk2, pumping out 3,600 nits.

“With our four pre-set buttons on the front, you can save a whole page of settings with one push,” Lee began. “In Hollywood, we know that set-up time can be precious, so any procedures you can save are important.”And it is paying off. 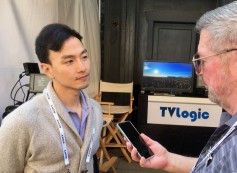 "I’m glad to say that this model which we previewed at NAB is now shipping and TVLogic is able to announce some pre-sales the week of Cine Gear," Lee told me.

Almost around the corner from TVLogic was the Mo-Sys booth, the folks who took the motion capture concepts developed by Cameron/Pace group for “Avatar” in their virtual camera and found a way to implement them in a range the rest of us could afford called StartrackerVFX.

Their CEO, Michael Geissler, told me his company was taking the opportunity of the Cine Gear experience to introduce their ideas to the Hollywood community. 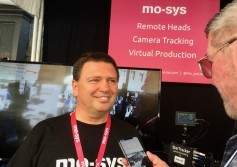 Michael Geissler, CEO of Mo-Sys, with Jay Ankeney of The Broadcast Bridge

“Mo-sys started off in the broadcast industry and are taking advantage of this year’s Cine Gear Expo to help us enter the film industry where there is a big demand for utilizing our system for pre-visualization,” Geissler told me.

But their big news was a working relationship with lens masters ZEISS.

“Calibrating a motion tracking system for different lenses can take a significant amount of time, and in the film industry they like to swap lenses on a regular basis,” he said. “Now, ZEISS has made it possible for us to record the distortion information for each lens as metadata and input it into the UnReal engine we use for rendering. So when the cinematographer changes lenses, there is no longer the need for a long calibration process. This can be a significant time saver.” 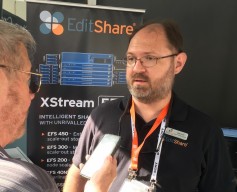 Jay Ankeney of The Broadcst Bridge with Matt Scott from EditShare

Finally, I went down to the Financial District to check in with EditShare where Matt Scott, Senior PreSales Engineer at EditShare, revealed a new level of security the company had devised to protect vital resources.

“We are demonstrating what we call EFS file auditing,” he began. “Whether you are talking about 24 terabytes or 24 petabytes of information on your services, we can keep an eye on every single asset.” That’s a lot of info tracking.

“The reason we are doing that is about 80% of all leaks throughout the industry are from people who had legitimate access to the information but either through malfeasance or ignorance or, in some cases, idiocy, are responsible for the leaks of footage.”

“So by creating a system that tracks every asset without having any impact to the overhead on the system we are able to trace back anything that may have been leaked out to the user who caused it to guarantee whoever chose to do this will be caught.”

As I said, the Cine Gear Expo has a lot more to do with than just cameras and lenses. Welcome to the new Hollywood in the digital age.