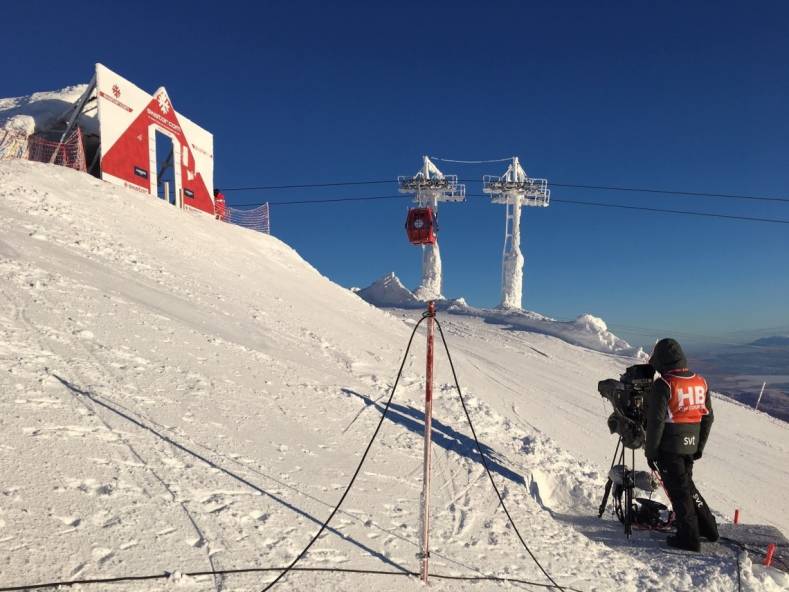 Sweden’s national public broadcaster Sveriges Television (SVT) partnered with Net Insight, Grass Valley and EVS to undertake remote IP production for the broadcast of the FIS Alpine World Ski Championships in Sweden earlier this year. Here’s how it was done.

The production setup included sending signals from 80 GV LDX 86 Series cameras from the course via two 100 Gbps fibre circuits from Telia to three control rooms in SVT’s Stockholm HQ over 600 km away.

Return signals were uncompressed HD and video latency is about 75 milliseconds. Clear-Com IP intercoms are also in use to make sure communications are as close to real time as possible.

Each of the three control rooms in Stockholm will produce different signals as one will focus on the regular world feed, another on world feed plus, and then the third on the Swedish unilateral needs.

Each circuit uses Nimbra transport solutions from Net Insight, including its terabit capacity platform, the Nimbra 1060. Grass Valley’s DirectIP capability enabled the XCU base stations to be situated in the central equipment room in Stockholm handling cameras from the venue. DirectIP also enabled the shaders to match the cameras so fewer crew were needed to travel.

In Stockholm, SVT scaled up its existing EVS resources for the specific demands of ingesting and producing the large amount of incoming feeds from both Championships which included standard cameras, triple-speed and 6 times super slow-motion cameras. This was done by bringing in additional industry-standard XT3 ChannelMAX servers from HDR Sweden to expand SVT’s existing XT3/XS3 production servers and IPDirector PAM software suite. The expanded EVS system consisted of over 100 EVS HD channels for both Host and national-unilateral operation.

FIS handled the creation and management of graphics which was then integrated with the produced feed.

“This accomplishment demonstrates how far we’ve come in executing remote productions, especially looking back at our remote setup in 2012 for the London Summer Games,” said Adde Grandberg, director of technology, CTO, at SVT. “To achieve this feat for the Alpine World Ski Championships, we knew from the beginning that we’d need more bandwidth, an adaptable workflow and very tight collaboration. We’ve set a new benchmark for live remote production at a major sporting event.”

The remote production workflow was set up to support a team of around 150 camera operators and technicians on location in Åre, with the rest of the production workflow and staff in Stockholm. A Grass Valley Kayenne video production centre switcher panel based in Åre gave the director access to a K-Frame X video production engine back at the studio. This sits alongside a multi-format Sirius 850 router that was purchased specifically for this event.

“When SVT first approached us about this project, the capacity to support so many cameras and reliably transport uncompressed HD signals over IP across such a large distance was unprecedented. We were working with Grass Valley at the time on this very undertaking, so this synchronicity significantly helped us bring this Alpine Ski undertaking to fruition for SVT,” explained Larissa Görner, strategic product manager, Net Insight.

For Grass Valley, Mark Hilton, vp, live production said, “Remote production is the next step change, opening up new ways of working by allowing a production team back at base to have all the resources they need to deliver high quality, captivating content. We are very proud to have partnered with SVT and Net Insight to help them push the boundaries of remote production and make history. This project illustrates how our DirectIP capability can make a big difference to how broadcasters and media service providers can approach large, complex production requirements.”