Omer Barzilay said Waves was the obvious choice for broadcast mixing. "When it comes to broadcast, you are usually looking for system redundancy and backups and the eMotion LV1 delivered just that. It is a clear advantage to have a software-based system. We were able to easily create two identical systems with two Waves SoundGrid servers each, and we created even more backups on our personal laptops. 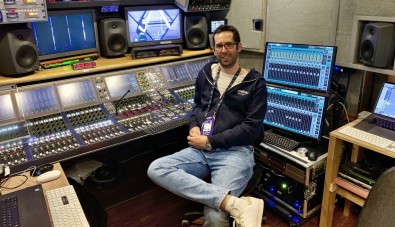 “One of the greatest advantages of using the LV1 is that I was able to mix most of the songs ahead of time,” Barzilay continued. "I was mixing about a month and a half in advance of the show, at my studio, by routing all the stems that I received ahead of time from Pro Tools to eMotion LV1, creating all the automations and effects so they were ready for the show.”

Barzilay said during the show all audio was routed to the eMotion LV1 mixer and to a multi-track recording computer. “We used the LV1 mixer’s A/B input to route the recorder back in, so we could continue mixing the show between takes. This was very fast, and as soon as a delegation finished their first take, we kept mixing it until the next one. We didn't waste any time.”

The Schoeps Omni Channel plugin was the only channel strip used for all vocals, including de-essing, EQ, compression and saturation. On lead vocals, the Waves C6 Multiband Compressor was valuable in controlling high and low frequencies and for controlling pops and hisses. The Waves Dugan Automixer plugin was used for all hosts’ and guests’ mics.