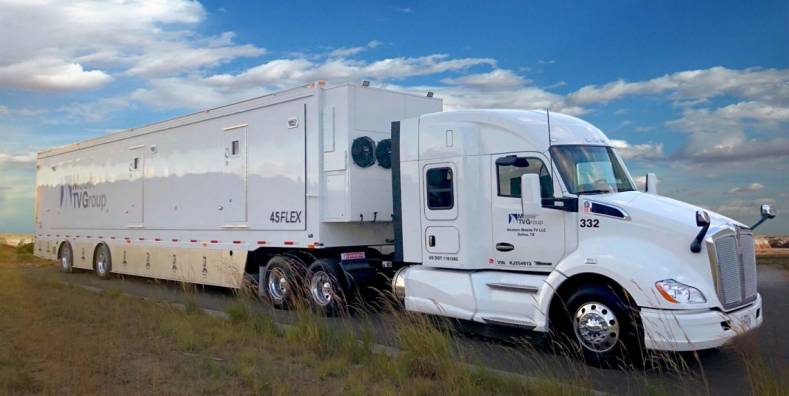 After more than a year’s worth of engineering, designing and struggling to find “not-yet-built” IP equipment, Mobile TV Group, a television production company based in Englewood, Colo., is now supporting its clients with a fully outfitted production truck whose infrastructure sends and receives audio and video as data packets, not SDI signals. The forward-looking truck was on display at this year’s NAB Show and it was a mobile production showplace to be seen.

Although several companies, both in the U.S. and abroad, have experimented with IP production as part of a more traditional workflow (taking a hybrid approach requiring additional signal conversion cards, or gateways), this new truck is a big deal when you consider that while there were a number of hurdles to overcome technically—and a standard way of sending and receiving IP packets had not been ironed out when they started—it was a big risk to build an entire truck around a technology that is just now maturing for live production.

While showing off his new IP production truck at the April industry convention, Philip Garvin, founder/CEO, Mobile TV Group, said that the new 45Flex was designed by the company’s in-house engineering and technical departments to provide a highly scalable, flexible, and future-ready solution to its ever-demanding customers. The Cat-5/6 cabling is also a lot lighter in weight than traditional SMPTE hybrid cable, another big benefit for mobile trucks that must meet weight restrictions mandated by the Federal Highway Administration. Less cable weight means they can put more equipment on truck. 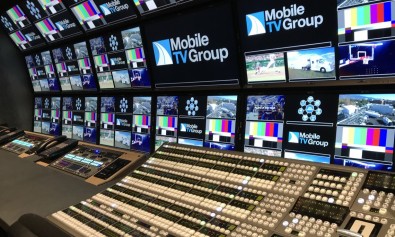 “[45Flex] offers the extra capabilities that IP can bring but has the same feel as our existing fleet of Flex baseband mobile units,” he said. “To avoid the need for IP gateways and reduce the pressure on the onsite engineering teams, we worked closely with leading IP-based–equipment manufacturers, including EVS, to ensure that every component was fully functional and able to communicate with each other.”

All of the equipment on board the 53-foot side-expandable truck is fully SMPTE ST 2110 compatible. There are no external gateways needed. That means the truck’s Evertz IP matrix router talks natively to the Grass Valley production switcher and Evertz multiviewer in IP. The EVS replay area works with the Calrec Audio console operator over an IP network. Taken together, the entire on-board networked systems provide the fastest way ever to move, exchange, and transcode media files during a live production.

The truck also supports a multitude of Grass Valley HD cameras (including Slo-mo versions and LDX82 Premiere cameras) with Fujinon HD lenses, which also operate in tandem with the truck’s SMPTE 2110 uncompressed IP-based workflow. Also a part of its IP interconnected infrastructure is four EVS XT-VIA and one XS-VIA live HD production servers as well as ChyronHego HyperX3 and Vizrt (provided for Fox shows only) HD graphics systems.

The decision to forego 4K production in favor of the best version of HD (1080p/60 fps) is an economic one, based on the current client demand for high frame rate (120 fps for 3X slow-motion replays in HD) and high dynamic range (HDR) image acquisition. There’s no business model for 4K on the production side and consumers can't get it sent into their homes via over-the-air broadcast or cable due to bandwidth constraints. [OTT platforms like Amazon Prime, Hulu, YouTube and NFL.com offer some 4K sports, but it’s delayed behind the linear broadcast and not always reliable.] The truck’s IP infrastructure could certainly handle a selection of 4K cameras when required. 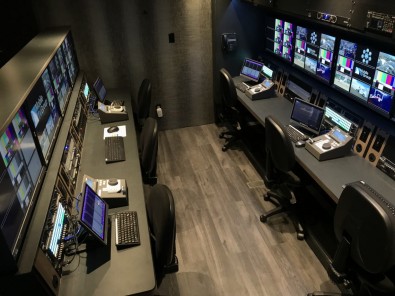 The real benefit is the truck's ability to support dual-feed productions (HD and HDR feeds) of MLB, NBA, and NHL games. IP gives the company the ability to say yes to almost anything a client might require. At the core is an Evertz 384-port EXE 2.0 IP router with up to 9,600 GBps data throughput and an Evertz Magnum control system to manage the IP infrastructure. If a camera or other sources suddenly become necessary, the IP router on board has the capacity to handle it with a simple flip of a switch.

“IP gives you a tremendous amount of capacity that you just can’t achieve in SDI without adding significantly more cabling and equipment and taking up more space, and, of course, space is always of the essence on mobile units,” Mobile TV Group founder/CEO Philip Garvin recently told the media. “A 25G path can carry two 4K signals, which would’ve normally taken eight cables previously, and there was simply no space for that [on board the truck] – either physically or in the router.”

The company has also developed “45VMU,” a companion 53-ft. visitor mobile unit support truck that will support live sports telecasts across the country. A 64-fader Calrec Artemis Beam console (256 inputs exchanged over a Dante network via IP, 64 analog inputs/64 analog outputs) handles audio for the home show, and the 45VMU unit is equipped with a 32-fader Studer Vista 1 console. The 10,240×10,240 Evertz audio router is connected via IP to the Calrec console.

The truck tandem is now on the road producing MLB games for a number of regional sports networks in the Midwest. It’s certainly a milestone for the industry as virtually everyone agrees that IP is the future of live production. For Mobile TV Group, the future is now. 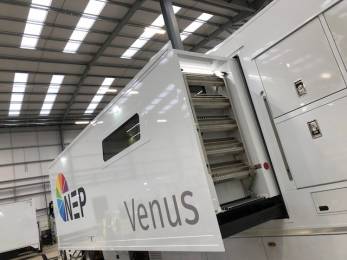 NEP UK has announced it is offering clients two new OB vans that are fully compliant with the SMPTE ST2110 standard. The new mobile production vehicles, named Ceres and Venus, are designed for major events, sports fixtures and other large-scale… 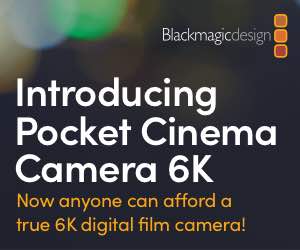