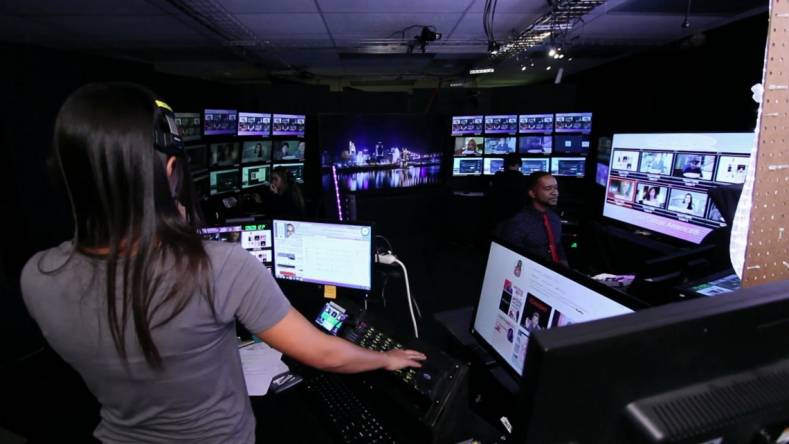 Inside the Video Call Center producers help ensure reliable connectivity for a multitude of TV shows.

In an era of rising programming costs, media companies are looking for ways to reduce production budgets, through both live remote control operations leveraging the Cloud and the public Internet as well as the use of less expensive consumer-level technology.

With fragmenting audiences and revenues, concern was that there needed to be new approaches to creating content less expensively using both the no-origination cost remotes and semi-automated production where the host could run the show, just like talk radio.

That was Tom Wolzien’s stimulus for developing an inexpensive way for TV news programs and talk shows to allow their call-in guests to use their own smartphones from the comfort of their homes (or wherever they happen to be).

“With fragmenting audiences and revenues, concern was that there needed to be new approaches to creating less expensive content using both no-origination cost remotes and semi-automated production where the host could run the show, just like talk radio,” Wolzien said. 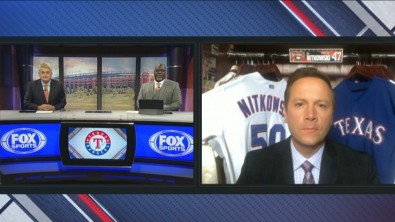 The VCC is now working with several Fox Sports regional networks to include call-in guests live.

Wolzien is a former executive and showrunner at NBC News who left for the financial world but had a vision for how call-in guests could be included into a program without sending out a professional crew and expensive cameras and gear. He came to the realization that if he could make the talk radio model of having guests phone in for interviews, he could reduce the cost of sending out video crews for a standup interview.

This, he figured, was totally in line with the fact that the cost of production in the television business is getting higher and higher each year while the number of viewers continues to decrease. And with billions of smartphones across the world, the possibilities for a wider selection of guests, and better storytelling, is limitless.

To help solve this challenge for producers, an idea he hatched in his garage to send IP video across laptops and PCs in 2012 has now grown into The Video Call Center (VCC), a remote sub-control platform that can receive, optimize, and route video calls into the production environment. With it, the company can receive and route video calls from anywhere in the world using the public Internet. High quality and low latency are the highest priorities within his three-tiered subscription offering.

The VCC is now working with TEGNA Broadcasting (which liked the idea so much they made an investment in VCC), The Discovery Network, MLB.com, several Fox Sports Network affiliates (which may soon become part of Sinclair Broadcasting), and Madison Square Garden Network, among others. To date, more than 700 separate program episodes and nearly 7,000 video caller remote connections have been completed. 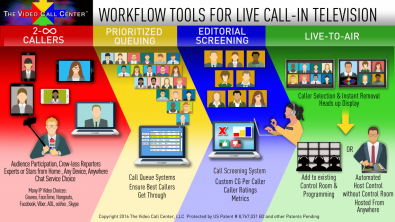 The Video Call Center receives video calls at its Palisades, NY headquarters and routes them to and from anywhere in the world.

For example, Fox Sports Network Detroit is using it to allow former players to provide play-by-play and short video commentary during live games from their living rooms. It’s called a “Player’s Only” telecast. One of the first players to use the service was phenom minor league pitcher Casey Mize, who pitched a no-hitter in the minors (for the Tigers organization) the day before he called a Detroit Tigers game live via the VCC.

Because the latency is so low—they say less than 200 milliseconds—and with the ability to see a return feed from the stadium or ballpark, callers are able to provide live play-by-play commentary using only their smartphone. And as the emergence of “Off Tube” sports casting (whereby an announcer watches a monitor of the game and calls it as if they were actually in the venue), continues to find favor with large media companies (it was done for the past few World Cup tournaments by ESPN and the Olympics by NBC, although neither used the VCC), the video call-in technology looks to be a winner.

Larry Thaler, a former head of engineering at NBC Universal and later a production industry consultant, joined as CEO in 2015 that same year the VCC’s proprietary video call-in technology helped produce 20 shows for TEGNA in Denver related to the infamous theater shooting in Denver.

“It was clear to me when I joined that one of the first things we could do better than anybody else was the concept of remotes by smartphone, laptop or any IP-enabled device,” Thaler said, adding that the ‘Player’s Only” broadcast experiment was likely one of the first times that off-tube play-by-play was done over the public Internet using someone’s personal device. 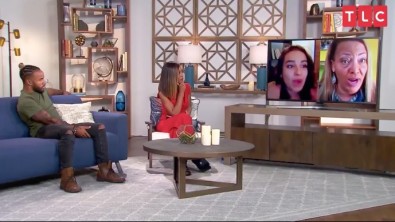 The VCC has helped TLC’s “90-Day Fiancé” program connect show participants in Louisville, Kentucky with callers in France, using only their smartphones.

“It turns out that bringing a live remote into a live news broadcast is harder than you think. Skype has been used for years, but the results are unpredictable at best, in terms of quality and reliability.”

Using common applications like Facetime (for Mac OS), WebRTC (Android) and yes, even Skype, a team of technicians at the VCC’s headquarters in Palisades, NY, works with clients to initiate a call prior to a live broadcast and make sure the quality is consistently good. They also provide live consultation on lighting and framing techniques as well. To find better bandwidth, they might ask the caller to switch applications or have them move to another location.

“Our technology encourages those applications to keep the throttle open the entire time the interview is happening, enabling us to ensure that we’re getting better quality than other platforms,” he said. “We don’t need a lot of bandwidth to make a great picture. We have gotten clean feeds from Morocco, Jordan, Russia, and Israel—all just using the public internet.”

The VCC offers clients three types of subscription services. There’s the Remotes By Smartphone service (Caller Cloud), which allows VCC crewmembers to use a phone number to reach any smartphone via texted-link or inbound Facetime call.

The call-in process allows the aggregation of unlimited callers, which can then be filtered and prioritized. Caller Queue enables the VCC crew to round up inbound video callers and prioritize callers into a show. They call it a “green room in the cloud.” And finally, Host Automated Production (HAT) is a IP-based service where the TV show’s host creates and controls the show directly without a control room. They simply work witha VCC producer who provides callers forthe show.

“The basic concept is that the interviewee can be anywhere,” Thaler said. “We’ve done interviews with people on boats and airplanes. And there’s no need for a studio or crew. If you want to interview someone in China, you can do it through his or her smartphone. On the interviewee’s end, they do not have to do anything but answer the phone.”

The technology could have a profound effect on local TV stations sending out news crews. Using the VCC’s services, stations could have more reporters in the field when news breaks. At the station, the VCC places an “endpoint” (a customized dedicated COTS computer) that receives the video calls. The cloud-based platform routes the signal to the box. Stations could have multiple endpoints in their facility. 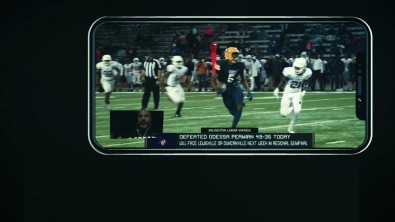 The VCC’s technology platform allows announcers to provide play-by-play during games from their living rooms, while watching a live return video feed on their smartphone.

Where many dollars are spent in the field, operatign costs are much less at the VCC, Thaler said, where Call Producers work with program participants to make them look as good as possible—and at flat rate, rather than incremental costs for crews.

“Clients are saving significantly,” Thaler said. “If you had to send crews or bonded cellular backpacks, it would cost a fortune and the latency would ruin the flow of the show. For more modest things, we have worked with a news organization that used us for remotes because they did not have crews available. They never had live remotes before in their show, but now they do.”

In the end, however, the VCC’s “unbonded cellular” approach, as Thaler likes to call it, is just another tool in a station’s toolbox, not a replacement for bonded cellular.

At the NAB convention in April, The VCC showed its Caller Queue platform with a new instant-connect feature called the “VIP feature.” This ensures that a producer can find the person they want to interview. Using only a phone number, the VCC sends the interviewee a text. The interviewee clicks on that text and is automatically connected to the VCC. Thaler claims they can get first picture within 24 seconds. The call is reliable—exceeding a 99 percent on-air connectivity success rate — and there’s no need to download an app to the phone.

“So, he or she is just clicking on a link and is connected,” Thaler said. “Our concept is that we make it really easy for the people out in the field to get connected. We believe if you have to download an app in the field and you’re not technical, it’s not going to happen. We’re talking about ubiquityfirst here.”

For veteran users of Skype and other platforms for conducting live interviews over the Internet who might scoff at the extra expense involved with using the VCC, Thaler said the proof is there to see.

“This video calling idea sounds crazy to people when they first hear of it, but once they use us they become true believers,” he said. “Our best customers are people who tried the various free platforms out there and were not happy with the quality or the reliability. The benefits of this are so dramatic and it’s changed the game for many.” 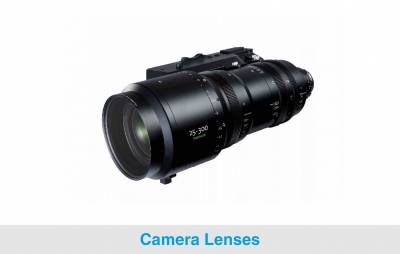 Camera Lenses: Through The Looking Glass, Part I