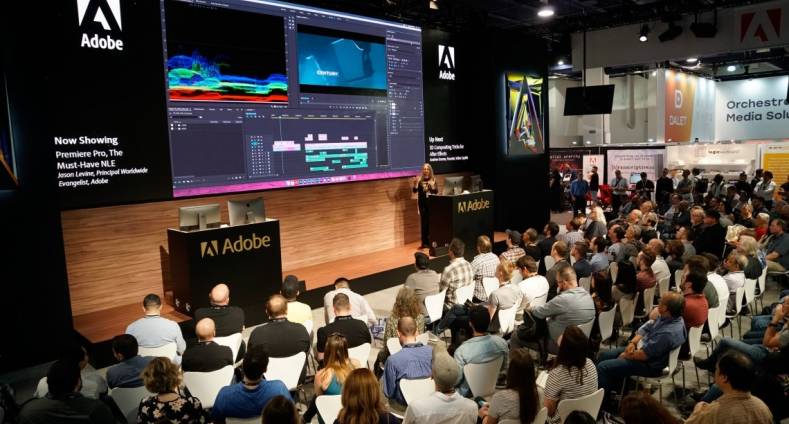 “We wanted to focus on performance stability in the software we were releasing at this year’s NAB,” Karl Soulé, workflow specialist for pro video and audio at Adobe, began our 1:1 interview, “and we have some significant Creative Cloud improvements as well as brand new features to present to our customers.”

One of the most impressive of these new features is Content-Aware Fill (originally called “Project Cloak”) that is now found in After Effects.

As Soulé explained, “This was a much-requested feature from users at the Adobe Max 2018 creativity conference. By using the Adobe Sensei AI technology we get the system to intelligently fill in the pixels needed to replenish the gap when an object is removed from a video shot.”

You can see this magic at work here:

Adobe Sensei AI interpolates what should be in the area that has been uncovered, intelligently fills

“This feature can also be invaluable when you have to get rid of an errant boom mike or need to remove an actor in a scene to create a ‘clean plate’,” Soulé told me.

Here is another visual run at this “Content Aware Fill” feature, emphasizing the improved faster Mask Tracking they have developed.

There are several examples in that clip, but don’t blink or you will miss the way the cars speeding down the highway simply disappear. 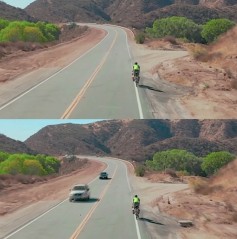 It's not just that the cars are gone, it's that the video keeps moving while they are gone.

Soulé pointed out, “If you need to fine tune the fill, there are tools in Photoshop that can paint in the details. This then becomes part of the Adobe Sensei algorithm.”

I’d like to add that if anyone is involve with 2D to 3D conversion, this feature will fill the occluded areas left behind when you have to space-shift an image for proper stereoscopic imaging.

The next feature, the Freeform Project Panel, was suggested by a group of Hollywood editors with whom Soulé consults on a regular basis.

“I’m a part of the Adobe Film Team in Los Angeles,” he said, “and this particular feature came from professional editors’ requests to have a better way to arrange assets visually. The ‘Freeform View’ is a new canvas that lets you arrange clips into a storyboard before you even touch a timeline to let you structure a logical visual sequence based on the narrative.”

Clips in the Freeform View will play and/or rewind if you mouse over them.

Another request from working editors can be seen manifested in the new Rulers and Guides feature.

“This was one of the top five User Voice request items,” Soulé explained. “The ‘Guide’ gives you on-screen marker references for aligning graphics and sharing the output between Premiere and After Effects, which can be especially useful when confining your video to the optimal viewing area needed for social media,” he said. “Under the View menu, the pulldown ‘Ruler’ will accurately tell you how many pixels across a given graphic occupies for absolutely positive positioning.”

With Rulers and Guides turned on, you know exactly where things are.

Punch and Roll is a gift to those who have to record Voice Overs.

“Instead of recording multiple tracks and trying to pick out the best sections,” Soulé said, “Punch and Roll lets you stop a recording at a vocal flub, move the playhead back to before the flurffle, and, with the help of an on-screen count down, resume recording from that point.”

As this video will show you, the on-screen countdown can be accomplished by an audible pre-roll of the already recorded audio.

As if they could not improve Auto Ducking, a feature that lets AI automatically lower the volume of the music track to blend in with an incoming voice track, Adobe has now included ambient sound in the ducking process, all user adjustable.

Instead of entering elaborate keyframes or sliding faders on the fly, you can let Adobe Sensei handl

That brings us to Premiere Rush, Adobe’s truly revolutionary scheme to leverage cloud-based collaboration to let you start cutting a project in the field on a app-based mobile editing interface and, since everything is synced through the cloud, finish the project on a workstation back in the studio running a desktop version of Premiere Rush or the full blown Adobe Premiere.

I wrote about this concept last June when it was called “Project Rush” and it has come a long way since then.

Of course, your editing capabilities get more sophisticated as the project in hand moves up the platform ladder from mobile to desktop systems.

And there have been some growing pains.

As Soulé explained to me, “The rudimentary editing capabilities on Windows and Mac iOS mobile platforms are rock stable by now. Android has presented some challenges, but when Samsung announced its new Galaxy S10 last month, which uses one iteration of the Android OS, Premiere Rush was among the top applications it featured. We will have a working version of the Android application for Project Rush available by the end of the year.”

Adobe’s presence at the NAB Show 2019 was filled with amazing AI introductions, but fortunately you don’t have to bow at the waist when being introduced to Adobe Sensei.

A simple “thanks” will do.