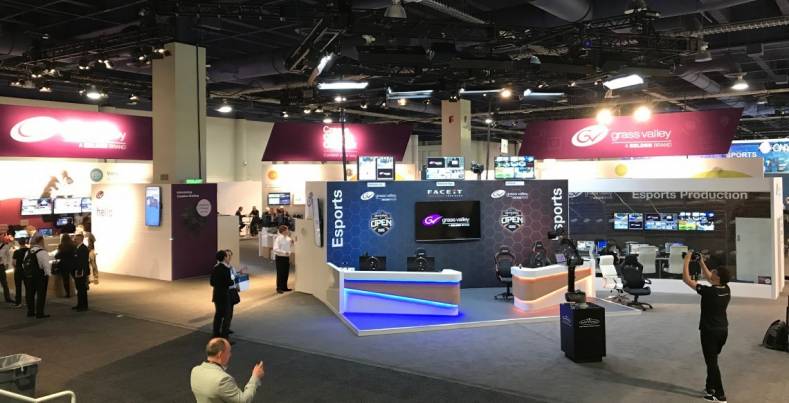 The Grass Valley exhibit was fronted by a day-long eSports competition.

With the benefit of two high end NLE’s, EDIUS and Rio, Grass Valley is continuing its advancements in all aspects of post-production.

Although the huge Grass Valley exhibit at the NAB Show 2019 was dominated by their eSports demonstration where they hosted live computer gaming competitions all during the convention, Atsushi Kataoka (who I am relieved to say lets me call him “Alex”), director of product management, editing systems, for Grass Valley, and I were able to concentrate on the company’s growing influence in conventional high end video post-production thanks to its ownership of two sophisticated NLE systems, EDIUS Pro and Rio. 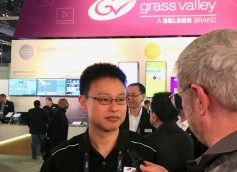 “Development of both systems has been moved to Kobe, Japan,” Kataoka began, “and we are announcing major improvements to each of them.  Although they are being upgraded by engineers on a unified team, for the time being each will be maintaining their own identities.”

That’s important since EDIUS, which was birthed by Canopus in 1998 as the DVRex-M1 and became EDIUS by the time the then Thomson Grass Valley purchased Canopus in 2005, is now considered optimized for newsroom operations at the heart of their Stratus server-based infrastructure.

Rio, on the other hand, was acquired when Grass Valley purchased Snell Advanced Media (SAM) in February, 2018 and is looked upon as a high end finishing system geared more toward cinema projects, although both often serve cross duties.

So it was very interesting when Kataoka told me, “Since we are already doing a lot of work supporting new codecs in EDIUS,” he said, “we are also putting that into Rio too so it can keep up with the latest formats. We are not trying to blend their workflows, but provide more crossover between the systems in the future.”

The GUI of EDIUS Workgroup 9

Of course, their operational parameters are identified by significantly different human user interfaces. But when I speculated whether the time may come that both systems’ softwares could be contained in the same workstations and an operator could simply hit a switch to change from one GUI to another, Kataoka agreed.

“Yes, that could happen,” he said. “One facility could contain both, since they each run on Windows. But the hardware requirements for the two systems are quite different with EDIUS relying more on the CPU and Rio leveraging more GPU power. But on the other hand, we are looking to establish a workflow that each could potentially share.”

I have also always been interested in Grass Valley’s browser-based edit system called Go! that extends Rio’s capabilities to editing in the field.

Although Go! starts with a browser-based interface, it is part of a whole newsroom workflow

“Go! is part of the server-based workflow for newsroom applications,” Kataoka said, “so it can work on any mobile platform with access to the Internet.

But the big news from Grass Valley post at the NAB Show 2019 is the new EDIUS version 9.40 due to be released in May.

”It includes support for ProRes export and ProRes RAW import on the timeline” Kataoka began. “ProRes import has not been permitted on Windows editors for a long time, but as soon as we heard Apple was permitting it we became one of the first NLE’s to enable it.”

“This includes bringing in 701 and 601 caption files as separate clips, converting them on export,” Kataoka said, “and embedding them into the video.”

There is also better HDR/SDR conversion support including the luminance level soft-clip tone mapping, and there is a new high speed H.265 software decoder for improved performance on HEVC clips. “We’ve also improved EDIUS’s multicam support with new sync options, including a new Audio Sync capability that we are going to announce soon,” he said.

There is also big news coming for Rio, Kataoka said.

“This will be coming out toward the summer, but this update should include support for Sony RAW and improved support for DNxHD camera files. Rio already can export IMF files through a plug-in, but we hope to give it that capability from its GUI. We’ll see.”

These two parallel paths, EDIUS and Rio, will be generating lots of new interest as Grass Valley post continues its prominence at the top of the NLE field.