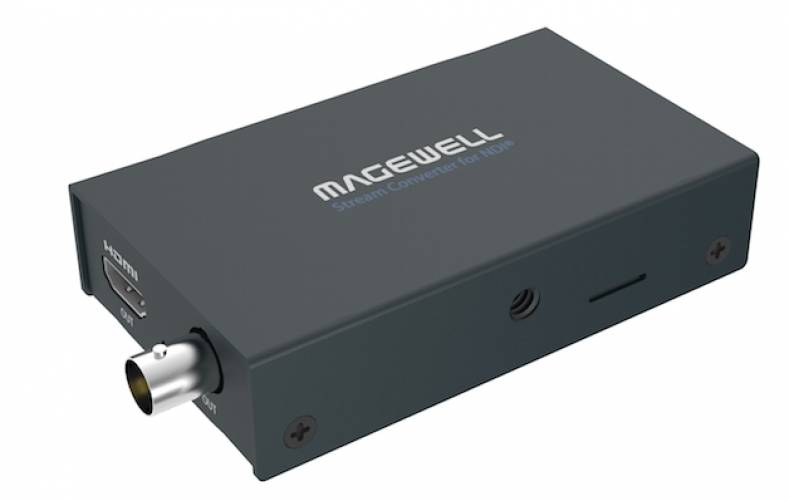 Expanding its portfolio of cost-effective devices for bridging traditional video equipment with IP-based workflows, Magewell Electronics now offers a hardware-based decoder that converts live NDI streams into high-quality SDI or HDMI outputs. This makes the new Pro Convert AIO RX decoder suitable for connecting to baseband devices such as monitors and projectors, which are used for applications such as digital signage and video walls.

Magewell’s FPGA-based NDI decoding capabilities are also being added to its four recently released (at NAB 2019) Pro Convert Plus NDI encoders, with the new functionality available to current owners as a free firmware upgrade.

The Pro Convert AIO RX decoder lets integrators and end-users output any NDI stream to baseband presentation or distribution equipment such as displays, projectors and routers. It can also be used to integrate legacy equipment such as switchers into NDI-enabled production workflows, or simply paired with an NDI encoder to enable long-distance transport of audio, video and power (PoE) over a single IP network cable.

The company said that its Pro Convert encoders were among the first products to incorporate its NDI Embedded SDK to ensure compatibility, and have helped make the transition to IP-based production easy and affordable for content creators.

Dr. Andrew Cross, president and CTO, NewTek, said the new Pro Convert AIO RX would help those in the professional AV market, “combining the high quality and low latency of our NDI technology to empower applications from video walls to immersive audience experiences.”

The compact, plug-and-play Pro Convert AIO RX features DHCP-based automatic network configuration, while a browser-based interface provides access to status monitoring and advanced features such as FPGA-based up/down/cross-conversion. Two buttons also enable users to select source content and match the output format to their target display without requiring a computer: one for choosing between all NDI streams available on the network, and a second for picking a preset output resolution and frame rate.

Slated for release in Q2, the Pro Convert AIO RX decodes NDI streams and outputs them over HDMI or SDI interfaces at resolutions up to 1080p HD. Users wishing to decode and output 4K NDI streams can do so with the newly-upgraded Pro Convert HDMI 4K Plus or Pro Convert SDI 4K Plus encoder/decoder models.

Owners of existing Pro Convert HDMI 4K Plus, Pro Convert SDI 4K Plus, Pro Convert HDMI Plus and Pro Convert SDI Plus encoders can add decoding abilities with a simple firmware update. Once upgraded, the units can be easily switched between encoding and decoding modes through the browser-based interface, providing exceptional versatility for users with varying project- or event-based workflows. In decoding mode, the device’s HDMI or SDI loop-through connection becomes the output interface, with the unit’s input connection able to serve as a “hot backup” source if the chosen NDI stream is interrupted.