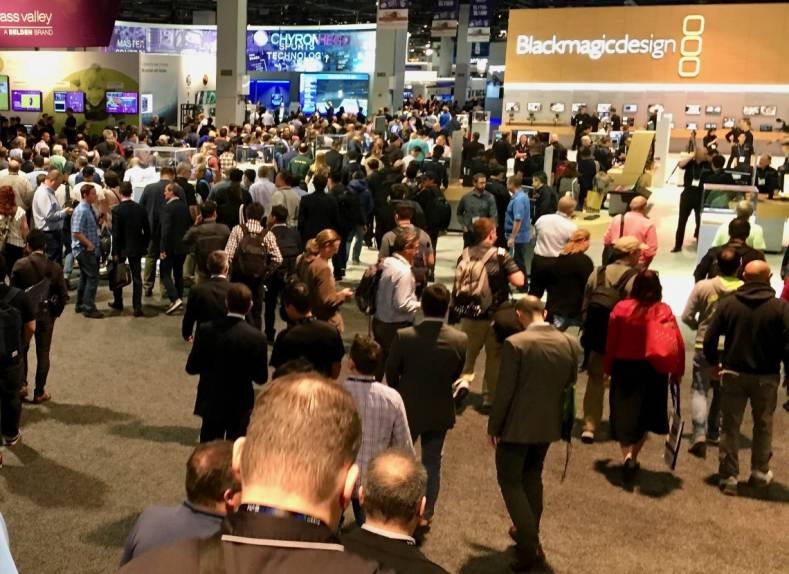 From an 8K switcher to a new 4.6K camera, you could hardly get through the packed Blackmagic Design exhibit to see its most talked about excitement, the new DaVinci Resolve 16.

The first new product Bob Caniglia, director of sales operations, Americas, for Blackmagic Design wanted to tell me about during our 1:1 interview in their sprawling exhibit at the head of South Hall lower, was their 8K product line, or what they like to call “Super 4K”. 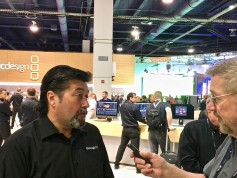 It starts with the ATEM Constellation 8K switcher which as Caniglia explained is “a 10 input 8K switcher but also a 40 input 4K or HD switcher because to get all that video into the system you need quad SDI or four 12 G cables. So while we were building this switcher we realized that the math dictated we could end up with a 1 M/E 8K switcher or a 4 M/E 4K switcher”.

The numbers are impressive.

But when switched to 8K functionality, all these features combine to make a powerful 8K switcher.

“To go along with our new 8K switcher, we have our new HyperDeck Extreme 8K HDR with advanced H.265 8K recording combined with a touch screen user interface and traditional broadcast deck controls,” Caniglia said.

The HyperDeck Extreme 8K HDR combines the reliability of HyperDeck with space savings of H.265 files

“It records 8K up to 60 fps, but also works in UHD, HD and SD if you want and has a nice 5-inch touch screen on it. The inputs on the back look like standard inputs from a broadcast deck.”

Surprisingly, the external controller that comes with this new recorder, called the HyperDeck Extreme Control, even includes a jog/shuttle knob and retro-looking buttons for eject and pre-roll with RS-422 deck control protocol.

There's.a good chance some of our younger post compatriots aren't even familiar wththe advantage of a jog/shuttle controller.

That’s because it is designed to interface with legacy equipment for, among other purposes, archiving purposes.

As Caniglia told me, there is a video on the Blackmagic Design Web site showing the company’s CEO and founder, Grant Petty, using an old Sony BVH-2000 reel-to-reel 1-inch machine to lay an insert edit onto the HyperDeck Extreme 8K HDR.

By the time Caniglia moved me on to the new Teranex Mini SDI to HDMI 8K HDR monitoring system that accurately aligns connected displays for precise color, it was apparent Blackmagic Design was once again thinking outside of its traditional category box.

“The reason for this product is that you get four 12 G outputs from the ATEM Constellation 8K or the HyperDeck Extreme and you need to monitor their images somehow,” he explained. “But most of the consumer 8K displays take four HDMI inputs which would require conversion. The rear panel of this unit has Quad Link 12G-SDI for HD, Ultra HD as well as 8K formats.

“On top of that we have added the capability to add a third party USB color probe, such as SpectraCal C6, X-Rite i1 Display Pro or the Klein K10-A probes, that plug into the front of the converter.”

Two independent on-screen scopes are included to facilitate compliance with broadcast standards. Their displays include waveform for showing luminance levels, vectorscope to see the intensity of color at 100% SDI reference levels, and RGB and YUV parade.

The Teranex Mini SDI to HDMI 8K HDR includes the same pro level 33 point 3D LUTs as used in the film industry. Two pre-created 3D LUTs can be loaded at the same time and customers can select between them from the front panel.

There was a lot more to be seen at the Blackmagic Design exhibit at the NAB Show 2019, most especially their URSA Mini Pro 4.6K G2 camera, a second generation of the camera that rocked NAB two years ago. 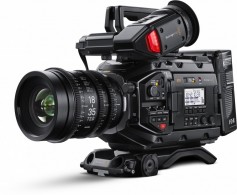 This new version’s completely redesigned electronics support a new Super 35mm 4.6K image sensor that captures 4608 X 2592 pixels at up to 3200 ISO with 15 stops of latitude. It features a new USB-C expansion port for direct recording to external disks, and as would be expected, supports Blackmagic RAW recording.

But Caniglia knew what I was chomping at the bit to learn about was the new DaVinci Resolve 16, what is becoming a major contender to be the top pro NLE and finishing system. 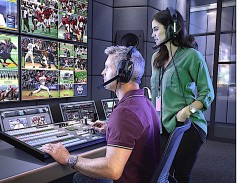 With DaVinci Resolve 16, less is more--but more is also more. It depends on its purpose.

“We’ve given DaVinci Resolve 16 8K capability since companies like Red Digital Cinema and Panasonic are making 8K cameras,” Caniglia said, “ but more than that we have taken a close look at the way people are actually editing these days. Sure, some people need detail-intensive finishing, but others still have to slap stories together as quickly as possible. So Grant came up with the idea of a cut page with a dual timeline.”

This new idea gives you a timeline on the top that represents the whole project, while the lower one is a zoomed-in area of the section you are working on at a given time. What makes this brilliant is that both timelines are interactive, so changes made on one are reflected on the other.

But just wait for the next step.

“Then we added a Neural Engine,” Caniglia told me with a bit of a smile. “It combines deep neural networks and artificial intelligence learning, along with new features such as speed warp motion estimation for retiming, super scale for up-rezzing footage, auto color and color matching, facial recognition and more.”

Did he say “facial recognition”?

Yes, it can analyze people’s kissers to automatically sort associated clips into bins.

Finding clips is just that much easier with AI

“Or, suppose you are close to a cut and you want to drop in a dissolve,” Caniglia said. “The Neural Engine knows you don’t want that video blip from the cut peeking through the video cross fade so it can make the adjustment for you.”

To jump to the chase, in response to requests from veteran linear editors, Blackmagic Design has given DaVinci Resolve 16 a real keyboard. It’s amazing how fast your fingers can fly when they are not limited to a mouse and a pointer.

Keybaord editing means keyboard shortcuts. No mouse can match it.

“We changed many of our editing techniques when we went from linear to nonlinear,” Caniglia finished up. “We gained a lot, but we left some of the good behind, too. With DaVinci Resolve 16 we are trying to get some of that back. Of course, if you don’t like these new features, you can always turn them off.”

The free version of DaVinci Resolve 16 is already available for downloading on the Blackmagic Design Web site.