Reckeen is coming all the way from their headquarters in Wroclaw, Poland, to bring two interesting new technologies to the NAB Show 2019 designed to significantly cut production costs.

There is a specific reason behind their ability to do this, as Adrianna Hebisz, marketing advisor at Reckeen, explaines.

Reckeen is an employee owned company, and during the past 25 years while they have been building OEM equipment for other companies, each time they came across the need to employ a unique technology, instead of licensing it from an existing producer they developed a new one themselves and retained the copyright.

That includes their own render engine called the called SAI 3D and an AES3 audio console, the ADB-100, among others.

As a result, now that they are producing their own products, Reckeen has their own core technologies that they can utilize for far less than if they had to rely on outside suppliers.

Visitors will see the results in two of their first introductions at NAB 2019.

The first is 3D Studio, which costs 30% as much as other virtual studio creation systems on the market today.

It consists of a workstation with the VKey100 joystick-driven control panel that can direct 4 virtual cameras in 3D Reality. Each panel can save up to 15 shots. The studio editor, Wizard, can also import video or static graphic elements from local sources. 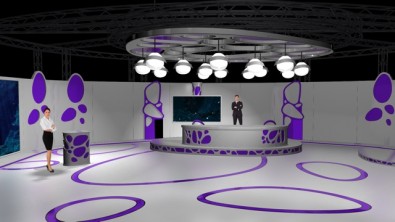 To make set-up simple, 3D Studio comes with 44 pre-built, ready-to-use sets, which can be customized by editing the look with Studio Editor Wizard.

“It is our goal to make this 3D Studio appealing to broadcasters working on modest budgets without a large staff who still want their on-air look to give them a competitive edge,” Hebisz said. “Our system also offers professional class chroma and luminance keying, 4 signal inputs, a dedicated capture card of our own design with a format up to 4K, 6 NDI IP stream inputs, and our internally designed AI presenter shadow creator that detects the talent’s position and calculates his/her shadow in 3D Reality.”

Hebisz points out that despite its relatively budget price, it is definitely suitable for independent and local broadcast stations. But since it is also designed for streaming output, even video podcasters will be able to put it to good use. 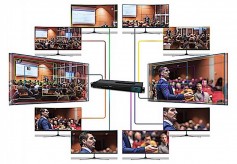 By using the high resolution of 4K, an image can be divided into multiple "Regions of Interest". Click to expand.

The MVP-100 video processor can mimic multi-camera live productions using only two static 4K cameras. The trick is selecting  “Regions of Interest” (ROI) from the cameras to cut out up to 8 HD virtual cameras. The MVP-100 is capable of taking in a broad variety of inputs: 6G-SDI, 4K HDMI, 12G-SDI, and Quad SDI. It then converts them into eight 3G SDI genlocked outputs that can be fed into any switcher for display, delivery or recording.

“If you don’t have a lot of space at a venue like a live concert, you can install the MVP-100 in just a small area and still create a multi-cam shoot complete with zooms, pans and effects transitions," Hebisz said.

You can see it demonstrated in this video:

Reckeen has developed a unique way to get these systems into the hands of clients. They rent them to resellers who, in turn, rent them out to their customers. That bypasses subscription costs, and puts the client contact in the hands of the resellers.