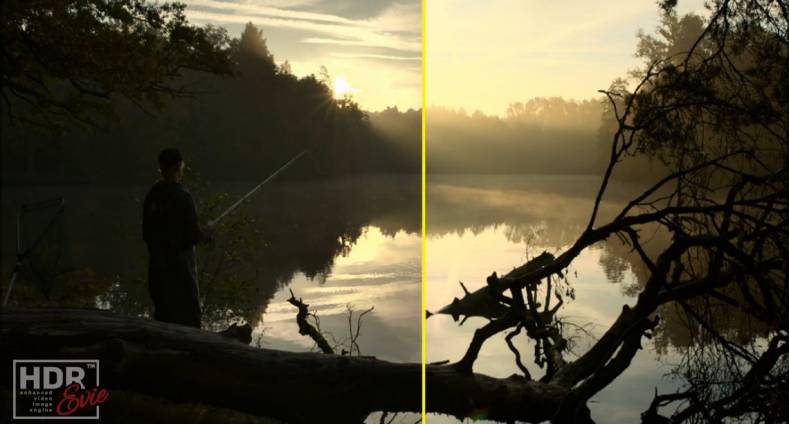 As the production community becomes increasingly aware of the value of High Dynamic Range (HDR) imagery for SD, HD and 4K, creating the best looking HDR requires analysis of each frame individually.

HDR Evie as a constellation of apps designed to convert HDR imagery from 4K to HD to SD, and also between the various HDR standards including HLG, PQ, SDR and SLog3.

“Of course, several systems have been able to accomplish this with a single overall setting for each project,” Gnann said, “but what sets our new offering apart is that our advanced algorithms can automatically analyze the video on a frame-by-frame basis.”

The single setting approach may be sufficient for studio productions under uniformly controlled conditions, or when tasking the system for a relatively simpler conversion such as SDR to HDR. The greenMachine can accomplish that relatively basic task using its constellation of apps called HDR Static.

“This can be especially important for live sporting events,” Gnann said. “Consider the way the action in a typical football (soccer) game quickly races from bright sunlight to dark shadows. One of our live broadcasts may have up to 32 HDR cameras, and it just isn’t practical to have an operator riding the aperture on each one of them as the exposure requirements change every second or so. Our HDR Evie can automatically create the optimum exposure and contrast for each of them in High Dynamic Range by analyzing each frame of video individually as they come in.”

Except for a single frame delay for processing, this whole conversion is done in real time.

The result is that home viewers will be able to perceive details in the shadow areas that they could never have seen before, and the improvement will be present in both the SD, HD and even 4K output of the production truck.

“We recently did a test here at a rock concert and found that our real time conversion actually looked better than the video shot by native HD HDR cameras,” Gnann said. “Best of all, the whole process is fully automatic without the need for human operators manning each camera.” 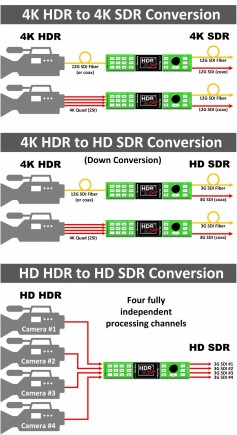 HDR Evie can be configured for various signal paths. Click to enlarge.

HDR Evie is ready to handle single channel 12G SDI 4K/UHD conversions or can be set up as a four channel device for 3G (HD) applications. Because it has 4K Quad 2SI inputs and optional 12G fiber I/O connectivity, it’s ready to be interfaced with almost any other system.

Even though most consumer screens, especially in Europe, are still SD, all could all benefit from improved SDR imagery. Anyone who has seen HDR knows that HD and 4K pictures really pop when improved by the expanded contrast and color gamut.

“We recognize this is a very complex conversion concept, so that is why we gave our greenMachine the ability to run both HDR Static and HDR Evie,” Gnann concluded saying, “But by giving digital content creators the option of applying our analytic algorithms on a frame-by-frame basis, we feel we have for the first time provided the highest quality from the various HDR Evie constellations running on our greenMachine self-contained AV processing appliance.”