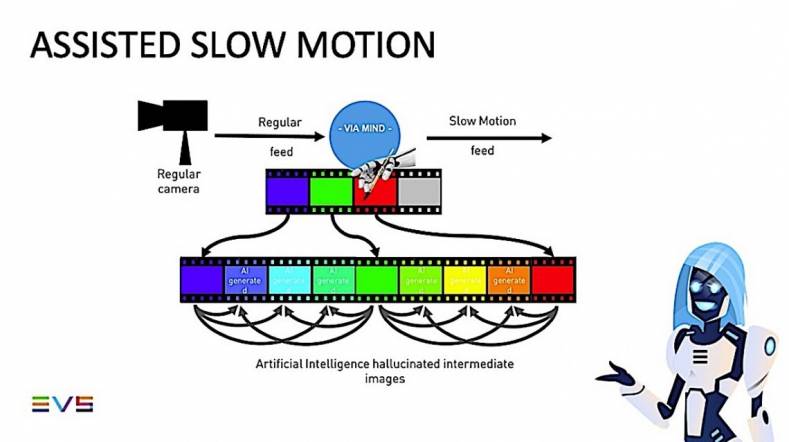 Artificial Intelligence and machine learning can create slo-mo video from every camera to greatly increase the options for slow motion replays.

“Using AI to Generate High-Quality Slow Motion Videos” will be a highly-anticipated session as part of the BEIT conference on Monday, April 8, from 11:20 AM to 11:40 AM in room N256.

The promise of this presentation is no less than discussing ways to get top broadcast quality slo-mo video from the recordings of cameras that do not have native high-speed recording capability.

“EVS has become convinced that Artificial Intelligence (AI) can be an important tool to enhance digital production,” Vounckx explained, “and we have put together a sizeable team to investigate its implementation in production workflows. Some of these tools are already available, such as EVS’s multi-camera review system called Zebra which is currently being used by Spain’s top football (soccer) league, La Liga.”

When it comes to slow motion, ubiquitously popular in sports events, the high speed cameras currently available are not only expensive to use, but also tend to have too large a form factor to be practical for some of the most popular camera positions, such as over a basketball net or inside the pylons at the corner of a goal line.”

What Vounckx and his team have discovered is that with the help of AI, they can take a recording shot at 30fps or 25fps and generate the images that would be needed between the frames the camera has recorded to create the illusion of slow motion. 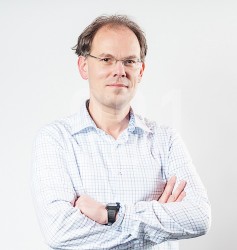 “We are actually trying to solve multiple challenges,” Vounckx said. “The first is quality. We have shown the results of our tests to many professionals in our field and they have determined that our results are more than satisfactory for most practical applications.”

This is achieved by having the AI examine the information that exists in the recorded frames, and interpolate the additional data that would be needed to create the intermediate frames that will then make the sequence appear to run in slow motion.

“Our second challenge is speed because, as everyone knows, in live broadcasting such as sports, the slow motion replays have to be ready for air in real time,” he said. ‘EVS is working to meet that criteria.”

There have been other non-AI based attempts to create this illusion, with some using motion estimation vectors, just to cite one example.

“The fundamental difference between these traditional approaches and what we are doing with AI is that our method utilizes machine learning,” Vounckx said. “Other attempts require humans to program the estimation of data change from one frame to the next which takes time and can be very laborious. The advantage of machine learning is that it can invoke the benefits of learning from examples.”

The team at EVS fed many examples from high motion cameras into their AI system and let the system learn about the factors that resulted in the best looking slow motion video.

Attendees to the NAB Show 2019 who put this AI session on their busy schedules will learn how every camera position in a sports broadcast can potentially be a source of slo-mo video for replays and highlight packages.

Vounckx will reveal as much as he can about the hardware behind this process, although he admits that some of it does involve EVS’s own “secret sauce” which will remain proprietary.

“We are using the most powerful GPU’s we can get our hands on,” he said “At the moment all of our equipment is terrestrially based, and conducted on the site of the production. But conceptually speaking, there is no reason it could not be accomplished in the cloud, where additional GPU’s could be dialed up as needed.”

Although this system in not yet named, Vounckx does, however, assure us that this AI-generated slo-mo approach has been tested out on many examples of high profile sports video material to great acclaim.

They’ve done it. It works. You’re going to want to learn about it.

Before joining EVS, Johan Vounckx spent 8 years at Telenet, a Belgian telecom company, as manager innovation and business development and manager of the technology office. Previously, he had been R&D engineer for Icos and director design technology for IMEC. He holds a PhD in electronics and a M.Sc. in engineering from the University of Leuven (KUL), and a MBA from the University of Antwerp.