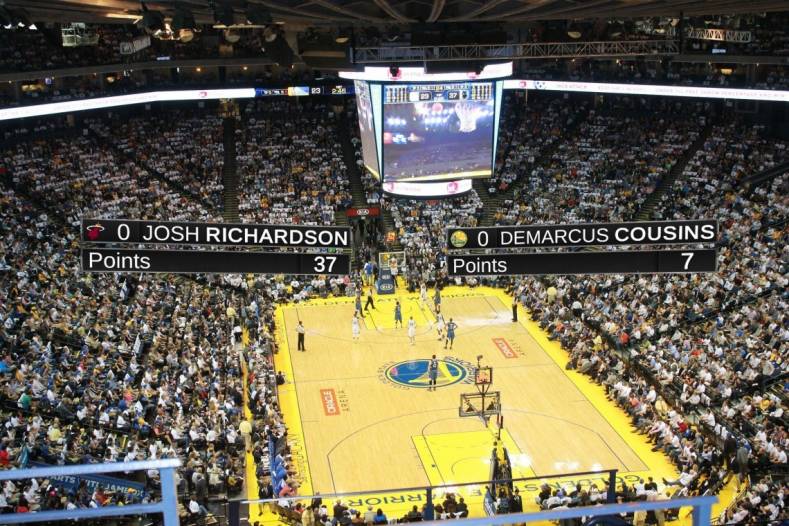 Those players’ name banners aren’t hanging over the stands on wires. They were inserted into the image by a FingerWorks 2.0 VR telestrator.

Sports fans have been watching FingerWorks telestrators being used on almost every major sports broadcasts since 1998. But they were all in flat 2D. How passé!

At NAB 2019, the company will demonstrate Virtual Reality (VR) capability to their telestration technology with version 2.0. Its native stereo streaming output can be seen on headset viewing helmets such as PlayStation VR, Gear VR, Vive or Oculus Rift once the proper app is downloaded.

“This will give fans equipped with the proper headset systems a wide angle, stereoscopic 3D or 180/360-degree VR view of the field of play they are watching,” Jodon Karlik, CTO at FingerWorks, explained. "It all depends on the way the show is shot and broadcast."

When used as a telestrator, it is necessary for the sportscaster to be able to draw a straight line over this stereo image to show how the ball or player should get from point X to point O, and getting a cohesive line to go from left eye to right eye while switching between cameras is much trickier. 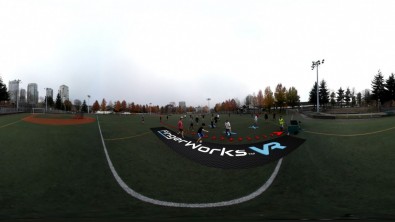 This is the way the uncorrected equirectilinear L/R images come into the helmets from the cameras. Click to enlarge.

“The companies that make these broadcast VR cameras, such as Intel or Next VR, record the two 'eyes' of the stereo VR image. Our graphical telestrator technology is inserted on the broadcast side by the game’s analyst,” Karlik said. “They then stream out their equirectilinear images to the headsets where they are stitched together to present a smoothly global visual presentation” 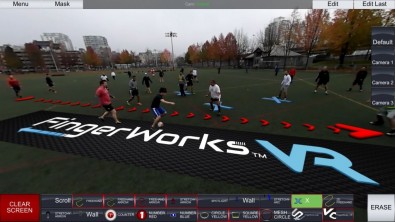 For broadcast, the process can insert a graphic that appears straight from left to right once the helmet's software corrects the geometry. Click to enlarge.

Now, when the viewer's head turns in a 180-degree broadcast, it is like viewing the whole field from one end to the other.

“This is most appropriate for sports played on enclosed fields such as basketball, football or soccer,” Karlik said. “But for action on more open venues like the Olympics, we are anticipating full 360-degree presentations.” 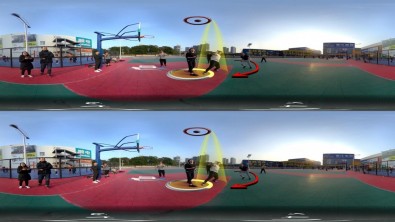 If this were a 3D presentation, in this case over/under format, VR 2.0 could still present the illusion of a straight line. Click to enlarge.

A technology demonstration is available at this link. A list of compatible equipment is provided along with a schedule and instructions on how to watch NBA games and the March Madness basketball tournament in VR.