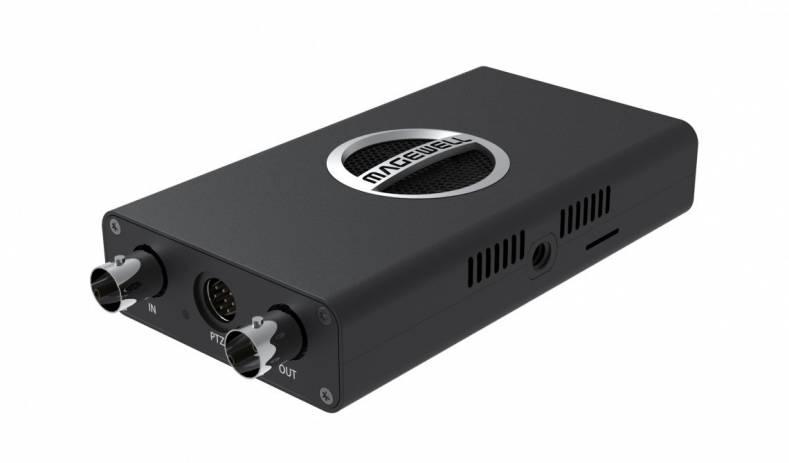 Magewell has announced the fourth entry in its rapidly-expanding Pro Convert family, the new Pro Convert SDI Plus standalone NDI encoder. The new model converts SDI-connected HD or 2K input sources into NDI streams with extremely low latency and is available immediately, as are all three previously-announced Pro Convert models.

All four converters will be featured in Magewell's booth at the upcoming 2019 NAB Show.

The Pro Convert HDMI Plus can also accept a 4Kp60 input, down-converting it automatically to HD for encoding.

Meanwhile, the two flagship products in the solution's series natively support 4K inputs and encoding. The Pro Convert HDMI 4K Plus transforms sources up to 4096x2160 at 60 frames per second through an HDMI 2.0 input interface, while the Pro Convert SDI 4K Plus converts 6G-SDI signals up to 4K at 30 fps into NDI streams.

The Pro Convert family incorporates NewTek's NDI Embedded SDK to ensure compatibility with the growing ecosystem of NDI-enabled solutions, and wraps its core functionality in a robust feature set. Automatic input format detection and network configuration provide plug-and-play ease of use, converting source video at its native resolution and frame rate by default without any manual setup effort.

The ultra-compact Pro Convert devices are ideal for both in-studio and portable field use. Value-added features for live production applications include a 1/4"-20 thread for standard camera-mounting accessories, preview and program tally lights, and NDI-based PTZ camera control. The units can be powered by the included AC adapter or via Power over Ethernet (PoE) for further deployment simplicity.