Attending an event at Sacramento’s Golden 1 stadium is an experience in itself.

Since opening in 2016, the Golden 1 stadium, which is home to the Sacramento Kings NBA team, has been considered one of the most technologically advanced event venues in the U.S.

“The Sacramento Kings’ AV and production team wanted to revitalize their fan experience in this new arena with a major video and audio upgrade,” Jason Coari, director of high performance storage solutions at Quantum began our exclusive interview. “A lot of it was intended to feed the massive 84 foot (26 meter) videoboard that hangs over the center court, currently the largest screen in the NBA.”

Designed by Panasonic, the Golden 1 stadium's hanging videoboard is almost as wide as the court itself. Click to enlarge.

“This imagery, combined with powerful 360-degree sound, was intended to create what the management called the ‘stadium experience 3.0’ for the fans,” Coari told me. “But the challenge they faced was they simply did not have the storage horsepower to move that volume of data from input to display, and search, retrieve and manage all that digital material along the way.”

The StorNext scale-out storage system utilizes AEL LTO 7 tape as its storage medium which has an uncompressed storage capacity of 6TB and a compressed capacity of up to 15TB.

“They wanted to use Ethernet and NAS (Network Attached Storage) technology to create a powerful system that was simple to use,” Coari said, “so they turned to us to find the best available technology.”

But storing all of that 4K video is worthless unless you can find the clips you need and do it fast enough to make playback relevant to the moment for the fans.

So Quantum brought in their StorNext Archive storage system, and called upon Square Box System's CatDV media asset management software to find what was needed, when it was needed. 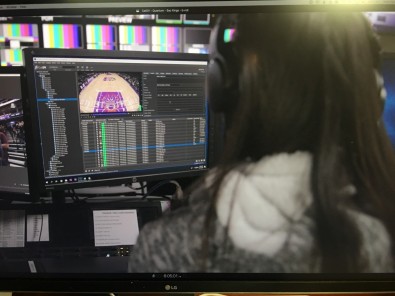 As Sacramento Kings vp of AV and production, Brian Plumb, said in a press release, “We ingest hours of footage for every game, but we might only need a 15-second clip. Locating a clip without having to scrub six hours of video is critical.”

The way Coari phrased it to me, “As opposed to loading all your footage to the cloud, StorNext Archive’s AEL LTO 7 tape gives the kind of hot content access with a throughput that will give you 2-3 gigabytes/second, so once a cartridge is loaded and that tape is spinning you get a much faster access to the material.”

As impressive as this system is today, Coari knows it’s only a step to the future.

“The Golden Center 1 installation has 150 terabytes of storage capacity now,” he said, “but they already want to expand to half a petabyte. It’s our job to help them maintain the reliability that will give them access to what they have now, but continue to build as next generation needs demand.”