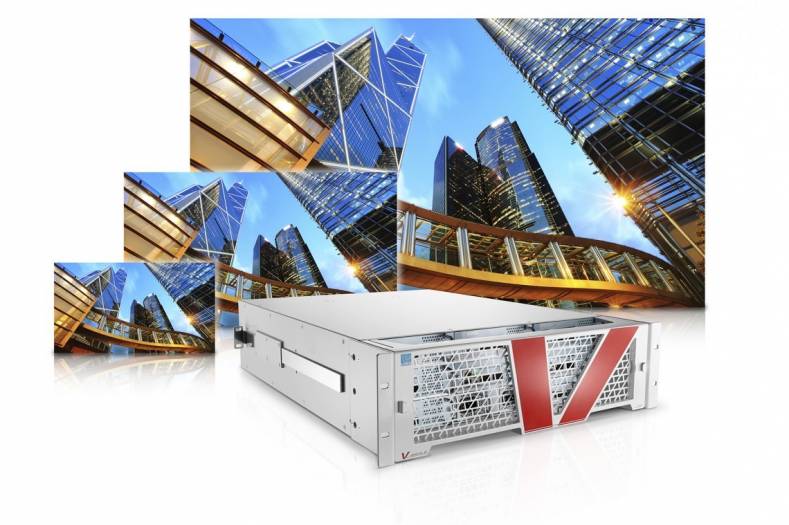 Lawo, German developer of IP network, control, audio and video technology for live broadcast, studio and performing arts, has elected to stage a major product launch at the 2019 BVE show in London.

The launch includes products on both the remote contribution and broadcast production side. On the remote front the firm is unveiling the Power Core Remote Audio Mixing Engine, the WAN-capable A__line AoIP interfaces, and the V__remote4 video-over-IP contribution package. On the broadcast production side, Lawo is demonstrating the V__matrix software-defined IP-Routing, Processing and Multi-Viewing Platform, the SMART System Monitoring and Realtime Telemetry for Broadcast Networks and the mc²56 production console. The latter includes the A__UHD Core high-density network-based, software-defined audio DSP engine. The setup also includes KICK, an automated mixing control for close-ball mixing approved by the Bundesliga, German’s premier soccer football league.

The V__matrix ecosystem incorporates high capacity FPGA-based processing blades loaded with software-defined Virtual Modules (VM) that tailor the system to the desired functionality. The range of VMs include the vm_dmv64-4, which Lawo claims is the world’s first IP multiviewer capable of expansion to effectively any desired scale, as well as the vm__UDX – 4K format converter. Multiple cores are connected through redundant 40GE (or 4x10GE) Ethernet interfaces to an IP network, forming a distributed IP routing and processing matrix that provides frame-accurate, clean switching similar to a legacy baseband matrix.

Finally, KICK is the ball tracking technology for close-ball audio pickup for sports such as soccer, rugby and American football. The system provides transparent sound and good ‘kick-to-noise’ ratio, according to Lawo. It also ensures a consistent audio level without noticeable fades, delivering a mix that is supposed to be fully repeatable from match to match, retaining high accuracy even after 90 minutes of play.

Responsible for producing all Bundesliga football matches, DFL (German Football League Association) subsidiary Sportcast has been using KICK in sports production since the 2017/2018 season for live tracking of the players, where it optimizes sound captured by the microphones then mixes it match-like a way as possible for TV viewers.