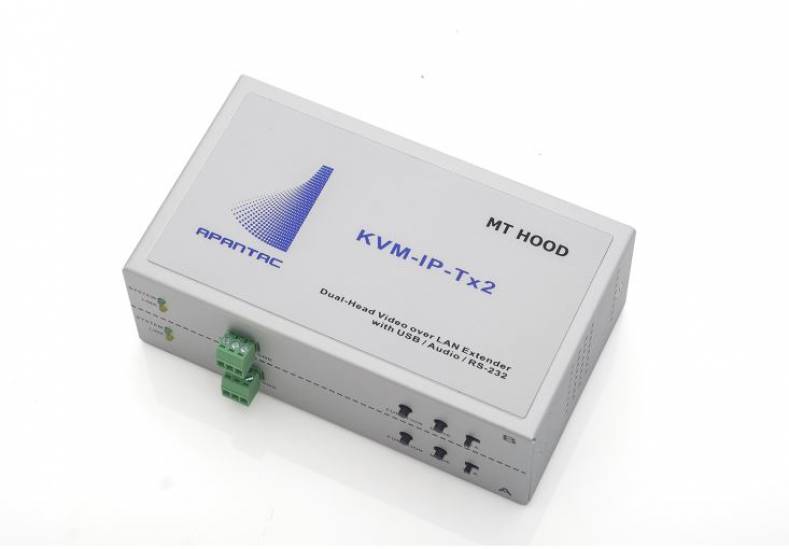 The KVM over IP extenders/matrices are designed for applications where multiple local computers need to be accessed from multiple remote locations. Available for both unicast and multicast transmissions, signals can be sent over IP to single recipients, or multiple groups on a network.

Apantac recently launched several new models of KVM over IP extenders & matrices. The KVM over IP extender/receiver sets are used as point-to-point HDMI/DVI/VGA video, audio, USB and RS232 extension solutions. Alternatively, these solutions can be used as a KVM over IP matrix when multiple sets are connected via an IP switch. In this configuration, users can access any server attached to the IP switch. Concurrent access to a server from several remote consoles is also possible.

Receivers can be configured to feed a video wall whereby each receiver will crop and zoom source signals and display them on each monitor of the wall. Multiple layouts can be created; e.g. a single source in full screen mode; each monitor displaying a different source; as well as other configurations. The wall configuration and control are managed from a separate Windows application or directly from the console menu.

A unique feature seldom found on similar products is that all the monitor pictures are in sync with each other. This avoids visual artifacts when the source signal is a moving picture.

These devices can be managed and configured on a network from a Windows interface. In the case of limited bandwidth, bit rate and frame rate are configurable providing a useful bandwidth management feature.

New models include Single head KVM over IP Extender/Receiver Set for 4K with HDMI video inputs and output, HDMI input loop for the transmitter/extender and POE (Power Over Ethernet) with resolutions up to 4K @30Hz.