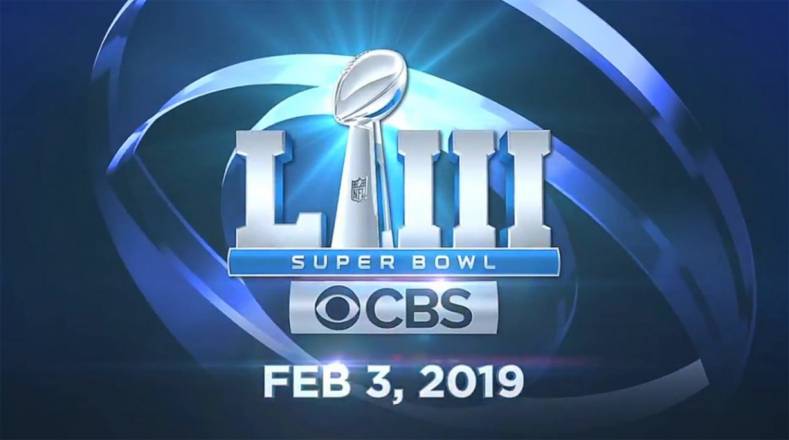 CBS Sports will use a lot of motion graphics, AR and pre-produced animations for its Super Bowl LIII telecast.

More than 30 people will work on the graphics packages for the game, utilizing an in-house (in New York City) staff of 12 Adobe After Effects/Cinema 4D artists and ten insert graphics people, Another six artists will be onsite in Atlanta for last-minute titles and graphic elements.

The usual on-air titles and lower third scoreboard/clock will be generated with ChyronHego graphics and CG systems while the AR graphics will be created with The Future Group’s Universe real-time compositing software, in tandem with wireless camera-mounted motion capture technology from NCam and a Skycam camera with tracking software from a company called Sports Media Technology (SMT)

Signals from the handheld and Skycam cameras will be sent back to the onsite NEP SSCBS C mobile unit, where it will be processed and then inserted into the main broadcast feed. For each camera that is tracked there is a corresponding graphics engine (for real-time compositing). That tracker is then sending its tracking information to the engine. The software runs on quad-processor COTS hardware and is processed with The Unreal Engine developed by Epic Games. This allows CBS to have full gaming power AR models can be much more complex and realistic looking. 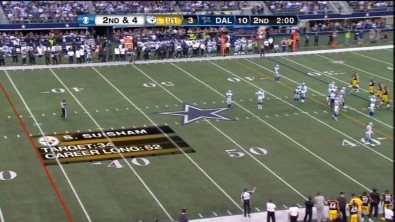 CBS Sports has used augmented reality graphics sparingly in the past but will up its AR game for the Super Bowl, using Sports Media Technology software in tandem with camera-mounted motion capture systems.

“We’re tracking five cameras running around the field, so it will be a challenge,” said LoMonaco. “AR is still finding its way, but the general attraction is that its eye candy for viewers.So, we’re trying to find a way to raise the bar a bit and create images that are captivating yet a bit more practical to utilize during a major live TV broadcast.”

He aid the goal is to make AR graphics of half-time stats and QB comparisons already seen on other networks and make it a little more exciting for the viewer.

“The approach here from an execution standpoint, in terms of the level of complexity of the scenes, its going to be different than viewers have seen before,” LoMonaco said. “I think they will like what they see and that it will positively add to the overall broadcast.”

The basic on-air graphics that will be seen throughout the main game telecast will not be drastically different from what CBS Sports has been using throughout the 2018-19 NFL regular season. In fact, CBS Sports —with the help of design firm Troika—rebranded its on-air look in 2016, its first in 35 years, which debuted for Super Bowl 50. 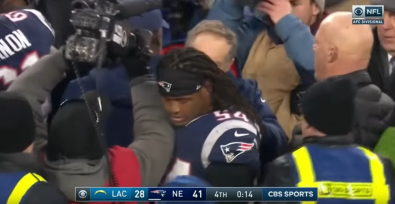 For the 20180-19 NFL season CBS Sports let the game speak for itself, choosing to place graphic elements on the edges of the screen. This year’s Super Bowl telecast will feature a similar graphic treatment.

“We did a massive rebrand for Super Bowl 50 and are still pleased with how it looks,” LoMonaco said. “It has redefined the personality of CBS Sports.There’s a lot of love for the look and it solves a lot of esthetic and practicality issues for us as designers, so we were not quick to walk away from but enhance the look and make it extra special for the Super Bowl telecast.”

These graphics will be delivered by ChyronHego systems for the insert graphics and also SMT’s SportCG product for the lower-third CBS in-game eyebar (designed by Reality Check Systems). Full motion animations will be pre-produced at CBS in New York using Adobe After Effects and Maxon Computer’s Cinema 4D software. A graphics design company called Troika was also brought in to help creatively.

“We’re here to tell the story of the game,” LoMonaco said. “Are Is AR graphics necessary? Maybe not, but this is the state of the art in graphics and the Super Bowl is the place to showcase our talents as a Sports Network. For us, it’s got to be on the screen for a reason and have practicality to it. We’re not big believers in just throwing things onto the screen to fill it up just because. We try and stay to the edges of the screen and let the game action entertain the viewer. The game is the center point and we simply enhance that with our graphics packages.

“I’m hoping for some positive buzz from viewers,” he said. “If the broadcast is successful and my team is successful, then that’s a huge win for us. And if we get some thumbs up from our peers, that’s gravy on top.”