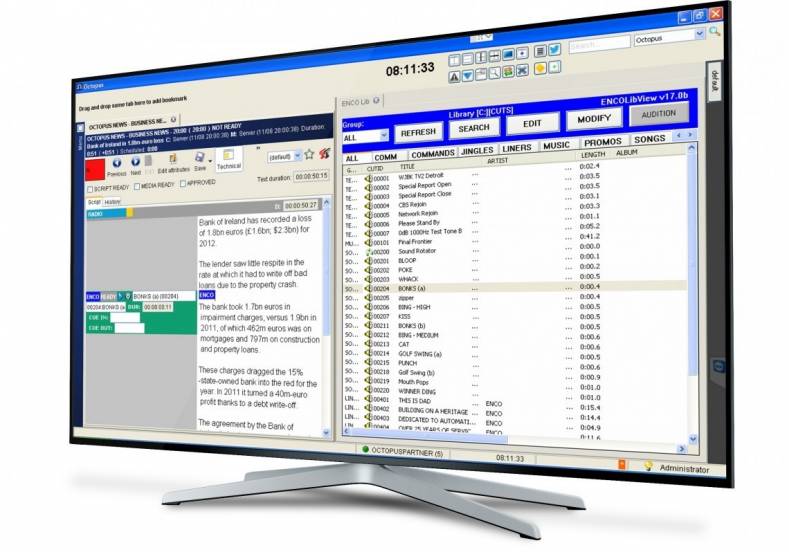 At the BES Expo in New Delhi, Octopus Newsroom will introduce the latest version of its on-air and on-line news-publishing platform, featuring an expanded range of task-specific modules.

Miro Rusco, APAC Director at Octopus Newsroom, said broadcasters are looking for the most efficient possible way to process news from an increasingly diverse range of sources, including social media, the web, syndicated news feeds and their own team of dedicated reporters.

“The huge popularity of digital devices such as mobile phones in India as elsewhere has created a massive surge in demand for digital news text and video which viewers can select rather than having to sit through stories that don't interest them.” he said, adding that the Octopus platform enables a single news production team, or one operator, to manage the entire operation.

“That represents a huge saving in cost and effort compared with employing separate news teams to cater for traditional and mobile viewing platforms,” Rusco said.

The new version 8.2 Octopus News software allows publishing to social platforms or websites directly from the long-term and short-term planning area. Related information stays attached to the topic and is easily track able. This, says the company, is a significant step towards better cooperation between the linear and digital publishing workflows, allowing resources to be used in a more efficient way with easy sharing of information among teams.

Rusco said Octopus 8.2 is more digitally focused than ever. It integrates easily with various web CMS systems as well as leading social media platforms such as Facebook, Twitter, YouTube and Instagram, so new teams can close performance gaps and effectively engage their audience.

A publishing platform for use in news broadcasting, Octopus allows easy ingest of all incoming source materials such as agency wires, RSS feeds and emails. It can display in a single view all content belonging to a feed, including images, video files or audio files. A relational database with SQL allows users to achieve their goals faster. With its topic-centric workflow, Octopus helps different teams within TV, radio and online portals work collaboratively on current affairs programs and news items.

Octopus runs natively on Apple Mac OS X, Linux or Microsoft Windows so there is no need for a parallel operating system, additional licensing or remote sessions. Hot-standby servers can be added, offering automatic client switchover if the main server is offline. An easy to use REST API allows customers to build their own applications, which can communicate and exchange certain data with the newsroom system.