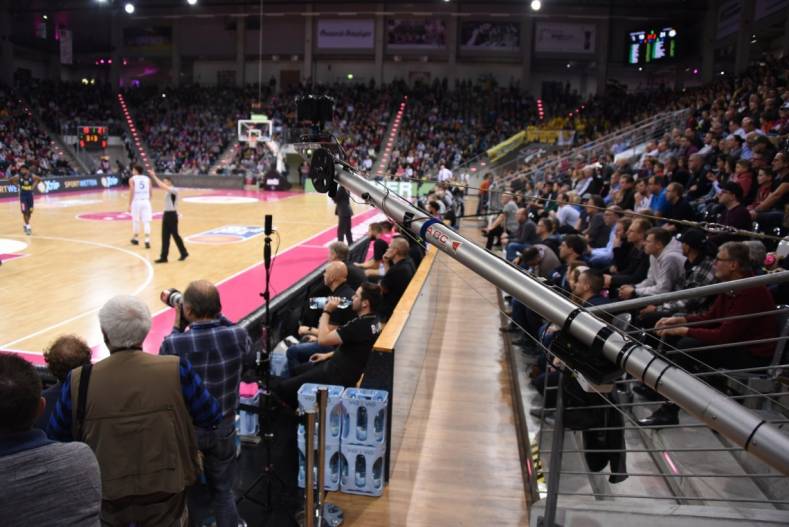 With a 360-degree Z-Cam right over center court, viewers could see all the action up close

MediaKind and Deutsche Telekom have given their audience a unique 2nd screen OTT experience by adding two cameras of 360-degree video to a basketball broadcast.

On December 9, 2018, MediaKind helped Deutsche Telekom present a hoops game live from the Telekom Dome in Bonn, Germany, between the Telekom Baskets Bonn and EWE Baskets Oldenburg with an added dimension never seen before.

For the first time, subscribers to Deutsche Telekom’s Magenta VR IPTV/OTT streaming service could use their 2nd screen device to see the game in monoscopic 360-degree video from two Z-Cam S1 cameras on the field of play—one in center court by the official’s table and the other right over one of the basket backboards.

Sponsored by Deutsche Telekom’s T-Labs research team, this was an impressively complex production, so I was especially grateful for the time MediaKind allowed for a private conference call with their experts in the UK to explain it.

“In late 2016, I started researching what kind of bit rate would be needed to provide HD quality resolution in a 360-degree image,” Baumann began, “and it turned out that a minimum of 8 K would be required. That superseded the ability of a broadcast signal, so right off the bat we knew we were dealing with streaming delivery and viewers would either need a head mounted display such as an Oculus Rift helmet, or a portable screen like a mobile phone or a tablet.”

They found a company called TiledMedia in the Netherlands who had figured out that even though the viewer wanted to experience imagery that appeared to totally surround them, each user was actually looking at only 15% of the picture at any given time. So the other 85% was basically a waste of bandwidth.

By transmitting "tiles" of video, viewers receive only the portion they are actually viewing. Click to enlarge.

“By splitting the 8K image into 512 X 512 tiles and encoding them independently, we were able to provide each viewer a personalized angle on the game depending on which direction their helmet or mobile screen was directed at,” Baumann explained. “To compensate for any download delay between tiles during movement, TileMedia inserts a low resolution backdrop image between the tiles so the motion-to-pixel update time is around 30-50 milliseconds. The update time from the low rez background to the high rez tile video is less than half a second. As a result, since their eyes always have something to look at, the viewer’s brain reconstructs the whole moving picture into a smooth image.”

So with at least a 15 -20 megabit bandwidth connection, the viewer thinks they are able to see a complete 8K, 360-degree view of the whole basketball court.

“The production company, Magnum Film, got the signal from the Telekom Dome to the Cloud using dedicated fiber as a 1 gigabit/sec. signal,” Furgusson added. “We were delivering two streams, one from each camera, which Deutsche Telekom then provided to their Magenta VR subscribers.”

Marketing director Barker told me that Magenta VR has about 100,00 subscribers in Germany, but since this was a test event they don’t have hard figures on how many people actually paid for the 360-degree service. 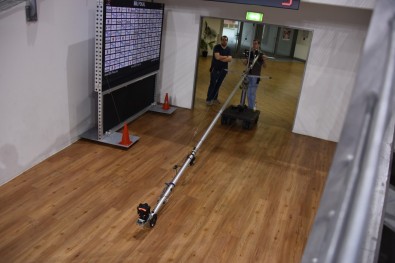 With the Z-Cam on a boom, viewers could choose the angles they wanted to see.

“What we’ve heard from Deutsche Telekom is they want to make this at least a monthly, if not weekly, event in 2019,” he said. ‘They are trying it out with a wide selection of sports as well as some pre-recorded concerts. But basketball proved an ideal starting point since you can get so close to the action.”

MediaKind may be riding the front of a trend, since in a VR Market report released by ABI Research just on the 20thof December, they predict “by 2023 the consumer VR hardware market will reach US $5 billion in revenues,” and by that time, “total VR hardware revenues will approach US $8.5 billion.”

“The technology is right on the cutting edge right now,” Furgusson finished up. “This test was monoscopic 360-degree video. But many of these cameras are also capable of 360 3D and once the encoding software catches up, we look forward to 6K, 60 fps, stereoscopic 3D presentations.”