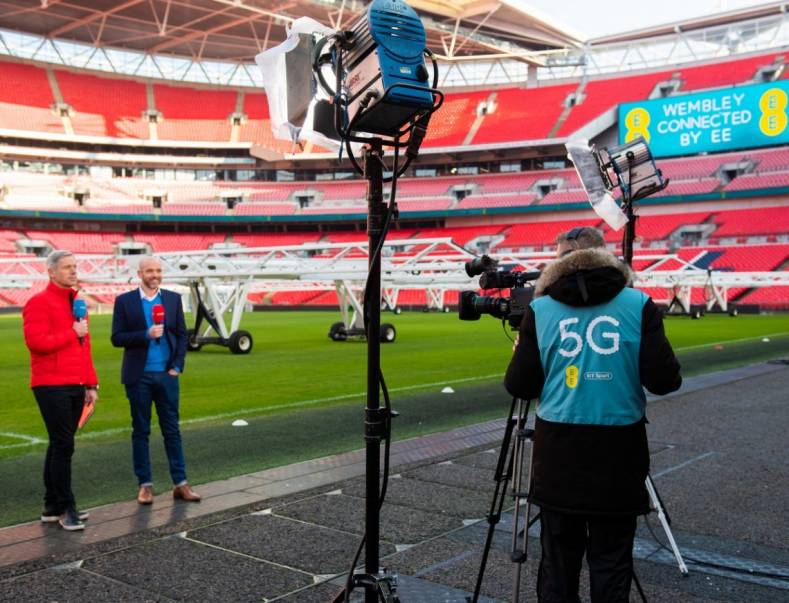 The next move on in mobile communications and broadband connectivity, 5G, is also being held up as potentially a new contribution and distribution technology for broadcasting. BT Sport and mobile operator EE demonstrated the broadcast possibilities for the fifth generation of telecom technology during November with tests of remote production applications.

BT Sport staged what it described as a world first on 21 November when a live link from Wembley Stadium was beamed to a presentation theatre at the ExCel exhibition centre in London's Dockland's, which was hosting the Global Mobile Broadband Forum. All vision and audio mixing on the transmission was handled from the broadcaster's headquarters in Stratford, east London. This was followed on Sunday 25 November by full coverage of the EE Cup from Wembley, again produced remotely over 5G.

Like other broadcasters, BT Sport has been working with the concept of remote production to extend its coverage, both for lower league football and sports that do not routinely get much air time. Speaking during the 5G test link from Wembley Stadium to ExCel, Matt Stagg, director of mobile strategy for BT Sport (formerly head of mobile video and content at EE), said, "We have been looking at remote production and there are a lot of use cases for it in broadcasting, including news. Trying to get a truck into places [is difficult] with parking and getting everyone there."

Stagg explained that with less equipment due to the 5G connection, it was possible to put everything in a car or on the back of a motorbike. The number of people needed for such productions would also be smaller and, added Stagg, there would be no need for a back-up, such as a satellite link. As well as live production, another potential use of 5G in broadcasting is the ability to send digital media, such as video footage, back to a facility for reviewing while a shoot is in progress.

BT Sport has already staged several remote productions for its coverage of lower league football using fibre and the current mobile broadband/transmission format, 4G (LTE). "4G was never designed for broadcast but it does work." Stagg commented. "People have used it in broadcasting for breaking news and other contributions. But it is only one network and is designed for downloading and streaming."

Stagg went on to explain that the fundamental difference between 4G and 5G was that the latter was able to operate on the basis of segments within a network. "This is network slicing, which allows us to build a virtual network," he said. "In fact I like to call it virtual fibre." Network slicing also offers the guaranteed latency, bandwidth and quality needed for live broadcasting. 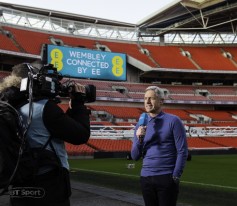 Jamie Hindhaugh, chief operating officer for BT Sport, said the broadcaster was always looking to take viewers "to the heart of sport". He added, "For Premier League games this means 360 video, Dolby Atmos and 4k but remote production is slightly different. Looking at 5G creatively it enables consistency but also the ability to move around a lot more and drive efficiencies. We've already found with 4G remote productions that we can use fewer cameras but put them in different places during the game, which made it look as though we mad more cameras than we did."

Picking up on this point, BT Sport's chief engineer, Andy Beale, said it was about doing more: "From the camera point of view the traditional approach was to specify a number of cameras but it doesn't work like that any more. A director can be creative by not doing the same with less but introduce new ideas. It will allow people to rethink what they are doing."

The remote production set-up demonstrated by BT Sport was based on a chain starting with the output of the camera, which was encoded and passed over Ethernet to a CPE dongle. Beale explained that the signal was 5G up to the cell, with the handshake done in 4G. After this the feed moved on to the EE 5G test network, using 3.4GHz spectrum from a 5G antenna in the stadium connected to a 10Gbps backhaul link for transmission to BT Sport's broadcast centre in Stratford. Once received it was decoded and fed into the studio gallery.

Audio from Sennheiser radio mics was also encoded and embedded in the video signal, which passed through a HEVC encoder. The demo set-up also used a Comrex codec plugged into the 5G cell for in-ear monitoring. Beale explained that the latency did not change with 5G but that the HEVC process could produce up to 2.6 seconds of delay. "People are working on solutions to fix that so there should be a new generation of codecs coming," he said.

The big mobile networks, including BT/EE, are due to start rolling out 5G during 2019. Matt Stagg noted that fully implemented network slicing may be available by 2020. "If we had it now we'd use it," he concluded.