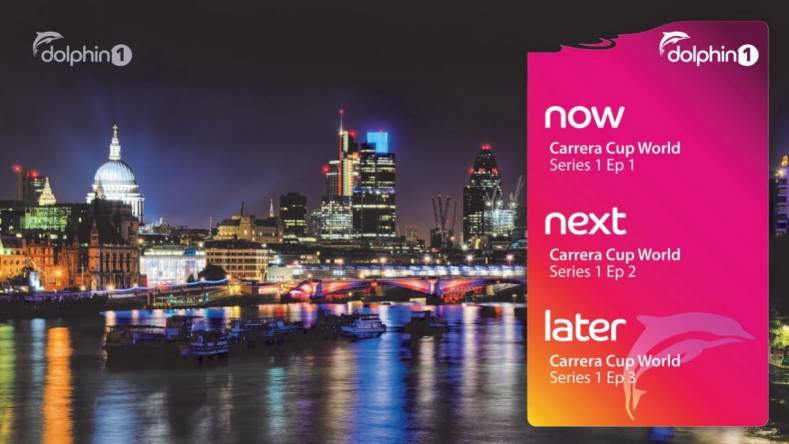 Here is a channel-in-a-box solution that provides a wide range of automation playout options as well as the ability to interface with graphics systems from many third-party manufacturers.

With the demise of specialized, big-iron playback hardware, there’s been a rise in software solutions to address the challenge of playout, both OTA and OTT. Channel-in-a-box (CiaB) systems have come into their own during this transition and have proven to be extremely cost effective for many use cases. However, not all CiaB systems are created equal, and it’s possible that “the box” can be quite constricting depending on its origin and design.

Can a CiaB integrate with existing best-of-breed hardware critical to operations such as external 3D graphics, or must you only use capabilities “inside” the box? How much automation control is in the box? How well does it “play with others”? This article will look at Dolphin from Pebble Beach Systems.

Dolphin is a compact and cost-effective integrated channel device with the flexibility to adapt to changing broadcast environments. Its capabilities extend far beyond typical CiaB implementations. Supporting an extensive range of compression and file formats, Dolphin incorporates full up- and down-conversion on ingest and playout, with the ability to mix legacy SD and HD content with new 4K material on the same timeline.

Dolphin replicates, in software, a playout chain that would traditionally be comprised of multiple discrete hardware devices. This software pipeline can be configured to deliver the required video and audio workflows, making it easy to specify the order in which processes such as graphics overlay, DVE and Aspect Ratio Conversion are handled within the playout chain.

It integrates seamlessly as a standalone device into a multichannel system which might also incorporate best-of-breed video servers, graphics or captioning devices for prime channels. It can also act as a component of a hybrid channel, blending its functionality with discrete technology such as graphics devices. This means that organizations can choose the optimum technology for the budgetary and technical needs of each channel.

Simulcast output capability provides the simultaneous output of a single media timeline in HD and SD formats, eliminating the need for downstream cross-conversion.  A wide range of standards and protocols are supported including SDI, uncompressed and compressed IP, and NDI. Integration with the Matrox X.mio5 Q25 SMPTE 2110 NIC card enables multiple SMPTE ST 2110 UHD streams of uncompressed IP whilst not increasing the load on the CPU. This significantly enhances the flexibility of Dolphin for uncompressed IP playout architectures. 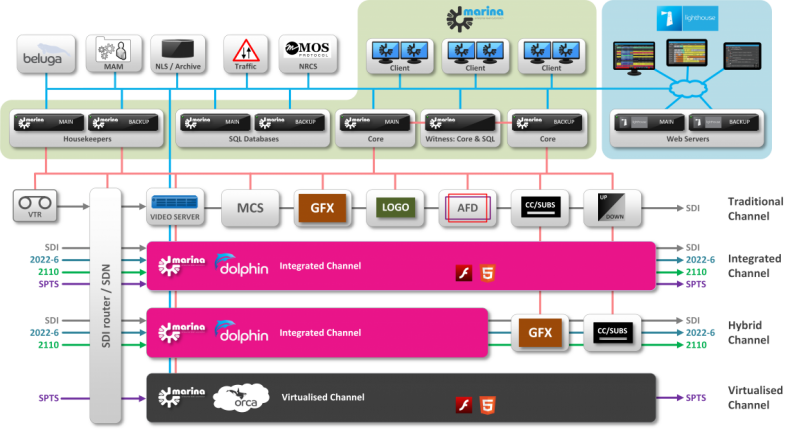 When the number of inputs is limited, users can encounter glitches and delays when switching between incoming streams. Thanks to the increased number of inputs this NIC offers, multiple uncompressed IP transport streams can be fed to Dolphin concurrently so that when the input is switched, the stream is already running and ready for a seamless changeover. This destination time switching also means that additional switching hardware is not required.

With so much interest in cloud and virtualized deployments, it’s important to mention that a completely virtualized implementation of Dolphin, called Orca, is also available. Both systems share the same underlying architecture and operate under the control of the Marina automation system, making it easy to mirror channel templates for simultaneous playout to traditional SDI as well as IP video distribution.

Orca can be deployed in private or public cloud architectures and its channel deployment, editing and design tools are accessible via a series of ‘Widgets’ within Lighthouse, Pebble’s comprehensive web-based remote management and monitoring tool for the Marina automation environment.

Dolphin is installed at broadcast and distribution centers around the world where workflows include regional commercial insertion, fast to market or short-term channels, disaster recovery centers and content ingest. Supporting an extensive range of file formats, it incorporates full up- and down-conversion on ingest and playout, and the ability to mix legacy SD and HD content with new 4K material on the same timeline.

Most significantly, it can act as a component of a hybrid channel, blending its functionality with discrete technology such as 3rd party graphics devices. Pebble also has partnerships with graphics companies like Pixel Power, Ross Video, and Singular.live to allow other vendors’ render engines to run directly on the platform. A virtualized version of the product, called Orca, can be deployed in private or public clouds.