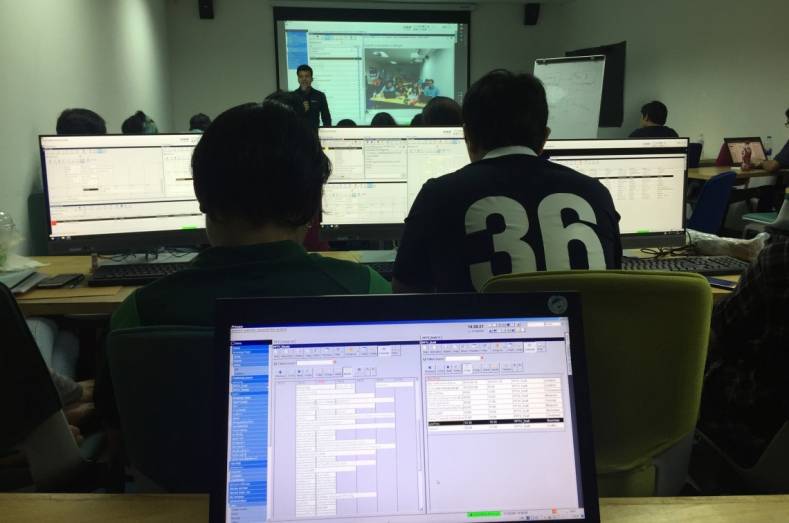 Octopus Newsroom automation system was selected for its operator-friendly versatility and efficiency improvements.

"We began as a linear channel transmitting via satellite C-band and cable, extending in 1080i high definition to the Thai terrestrial digital multiplex and later to online networking," says PPTV HD's IT Director Pitsanu Porameesanaporn. "News currently amounts to just over 30 per cent of our output which is quite a large proportion for any broadcast channel. We tackle it under the five categories of home news, global news, hot issues, lifestyle and entertainment news. Sport occupies another 20 per cent or so of our programme schedule and overlaps quite frequently into the news coverage."

"We selected the Octopus Newsroom computer system as the most versatile and operator-friendly way to improve production efficiency. It has proved an ideal choice for creating linear and on-demand news as well as sports coverage, and is a great improvement on what was previously a largely manual workflow."

"Our target viewers, and indeed those of every age group, are increasingly watching via IP-connected digital devices both at home and when traveling. Mobile viewers are usually in a hurry so appreciate the freedom to select the news that most interests them rather than watching traditionally constructed linear programmes. By providing that option, we are also able to compete strongly with other online news sources."

"Installation and configuration commenced just one month before the system went live and was completed with two weeks to spare," adds Octopus Newsroom APAC Support Manager Kobchai Buarod who supervised the project. "The system is running on main and hot-standby servers and comprises a full set of available options including the Octopus Mobile app which lets reporters submit video clips, audio, still images and text from practically any location.

In cooperation with Vizrt Thailand we also integrated Vizrt CG, MAM and playout to provide an end to end solution which unites PPTV's broadcasting and digital teams. Users are able to browse and prepare content or even turn news stories into social media publications and vice versa.

"PPTV HD is one of Thailand's most dynamic television channels and a very welcome addition to our customer base," comments Octopus APAC Director Miro Rusko. "Broadcasters worldwide are waking up to Octopus as a highly efficient way for traditionally focused news teams to package content for the rapidly expanding on-demand style of viewing. I would like to thank every member of the PPTV, Vizrt Thailand and Octopus Newsroom teams for their contribution to the success of this project."

Octopus is a publishing platform for use in television, radio and online news broadcasting. It allows easy ingest of all incoming source materials such as news agency wires, RSS feeds and emails. Octopus can display in a single view all content belonging to a feed, including images, video files or audio files. A powerful relational database with SQL enables users achieve their goals faster. With its topic-centric workflow, Octopus helps different teams within TV, radio and online portals work collaboratively on current affairs programs and news items.

Octopus runs natively on Apple Mac OS X, Linux or Windows so there is no need for a parallel operating system, additional licensing or remote sessions. Hot-standby servers can be added, offering automatic client switch over if the main server is offline. An easy to use REST API allows customers to build their own applications which can communicate and exchange certain data with the newsroom system.