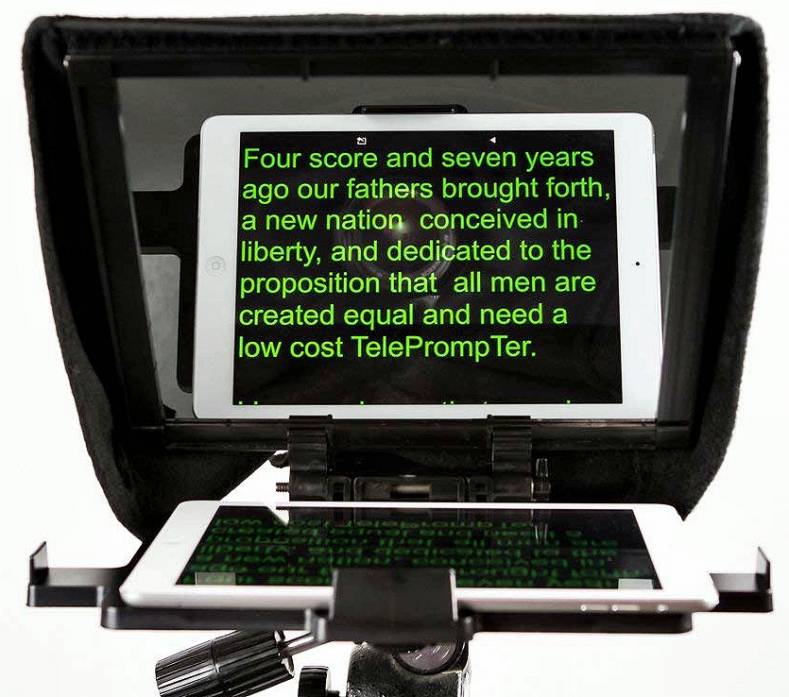 Teleprompters used to be a special item in a production budget, an extra daily cost for any shoot that often required a dedicated owner/operator on the set. Today, with the emergence of tiny video cameras and smartphones, teleprompters have dramatically fallen in price and usability.

Whether shooting news stand-uppers, video blogs or YouTube videos, it is a new era for teleprompters. Now compact and affordable, prompters are now very easy to use and can save hours with talent unable to remember their lines.

Many of these low-cost prompters work using one of many prompting apps that can be downloaded at Apple’s App Store or Google Play. Setup isn’t complicated.

Teleprompters have been in use for many years and their working principle remains unchanged. They display a scrolling script in front of a camera lens, allowing the presenter to read while keeping eye contact with the audience. 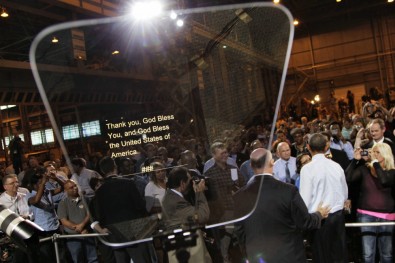 Presidential teleprompter during the Obama era

They used to require a dedicated monitor at the base of the device to display the script. It required finicky alignment, which explains the need for an operator. Now a smartphone or tablet has replaced the monitor. A reflective and transparent glass sits above the display device, in front of the camera lens. It mirrors the text displayed from the application. That’s it.

Heavier monitor-based prompters from the old days required a heavy duty mounting option. Now there are three main ways to mount prompters. Some attach on a tripod, and a camera attaches on the back of the prompter. Others attach to the front of a camera rig. And other models mount on a separate tripod or stand in front of the camera. Regardless of mount, each does the same thing.

B&H Photo in New York City, a major dealer for teleprompters, said some of the most popular miniature models are the Parrot V2, the Glide Gear TMP 50, Onetakeonly Pad Prompter, the Telmax GoldII Prompter and the ikan Elite Pro Universal Large Tablet Teleprompter. 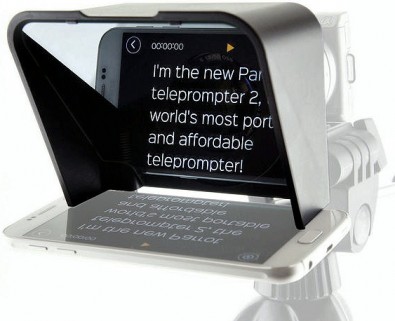 The Parrot V2 ($109) attaches directly to the camera itself. Using one of nine included adapters, it screws onto the filter thread of the camera’s lens. It weighs next to nothing, so it doesn’t put pressure on the camera.

The Parrot V2 is one of the most affordable prompters available on the market. It was designed for the video blogger and so was the price. The Parrot accepts a smartphone as the display, and it includes an iOS/Android prompting app as a totally free download. The Parrot also supports an optional remote control that allows a presenter to adjust the scroll speed and other factors remotely. 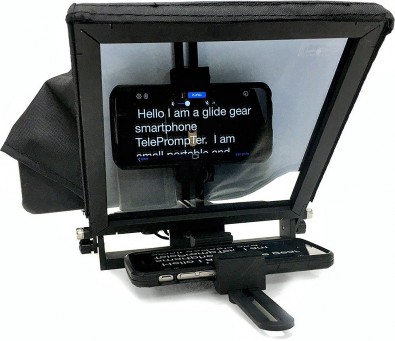 Another ultra-compact solution is the Glide Gear TMP 50 ($99), which also uses a smartphone. This prompter has an interesting feature that’s not commonly provided in other teleprompters. It includes a bracket that lets operators use another smartphone as the camera, on the rear. The TMP 50 offers mounting threads on the bottom and can be used tripod-mounted or attached on various other supports. 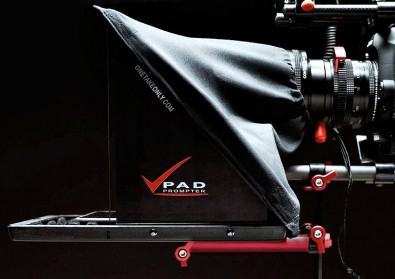 Another option is the Onetakeonly Pad Prompter ($269), a top seller that also has a flat, fold-out design. It comes in two versions: a standard one that attaches to a separate tripod or light stand, and one that includes rods and rod adapters for attachment to the front of a camera rig. In either version, you can remove the mounting bracket from the bottom and place the prompter flat on a tabletop. 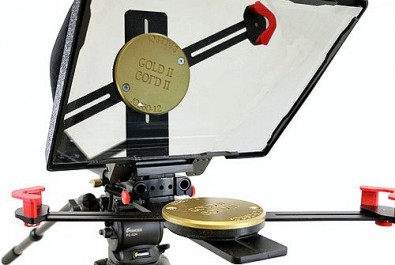 Telmax offers the GoldII Prompter ($459), a prompter that has high-quality, optical-grade glass and a powder-coated aluminum frame. It supports virtually all devices up to the 12-inch iPad Pro. The glass is designed with an anti-reflective coating that keeps glare out and prevents light from bouncing around under the hood (the space where the prompter and the lens meet).

This teleprompter also folds fairly flat for transport and storage, and it supports an optional Telmax remote control. The GoldII has a traditional tripod-mount design and it fits small to mid-size cameras on a height-adjustable camera platform. 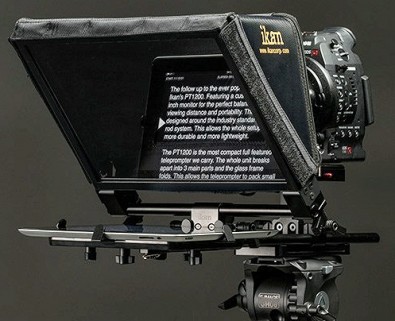 Ikan also offers a solid choice for larger tablets with the Elite Pro ($649). Aside from the general features, this prompter features scientific-grade glass, quick-release camera platform, magnetic hood and a wide tripod-mount platform for better stability and balance.

These prompters just scratch the surface of what is now available for small format video. Major prompters still serve mainstream broadcast studios, but small inexpensive units are designed for highly portable field use.

When talent just can’t remember their lines, a prompter can save the video shoot.