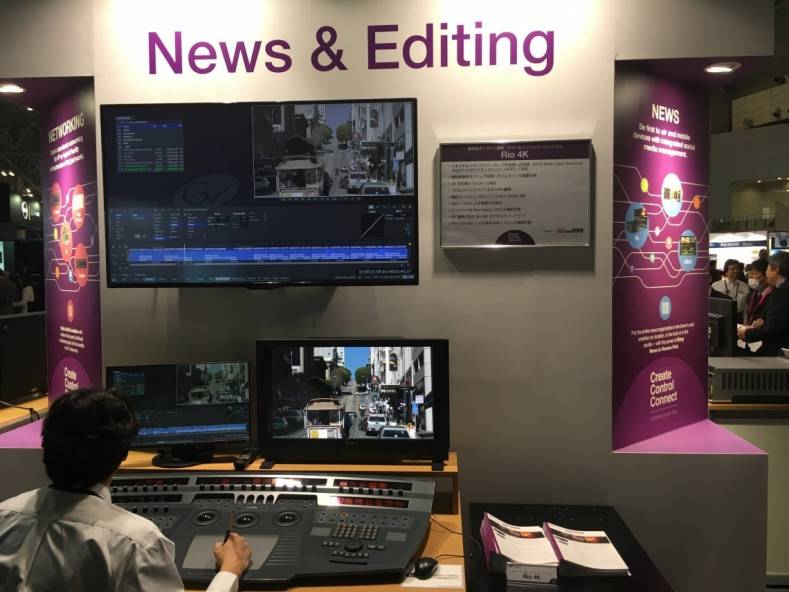 Rio joins a select elite as one of the most powerful, high end finishing NLE’s on the market today.

Grass Valley is giving its Rio powerhouse editing system new features that will put it at the top of its class for speed and codec flexibility.

This new version 4.5.3 of their Rio post production finishing system was one of the highlights of the Grass Valley exhibit at November’s Inter BEE (International Broadcast Equipment Exhibition) in Tokyo, Japan.

As Atsushi (Alex) Kataoka, product manager for Edius and Rio at Grass Valley told me during our exclusive interview, one of the most significant new additions was support for Dolby Vision HDR with the addition of a Dolby CMU (Content Management Unit) box so that video enhancement can be made across multiple display devices with all the metadata stored in a single XML file.

Now that Netflix is distributing Dolby Vision, that version of HDR is getting more in demand.

“We know this is especially important for content creators who intend to distribute to Netflix,” Kataoka said. “We feel that if Dolby Vision is supported in Rio, that encapsulates any of the other HDR formats. All of its parameters can be controlled with frame analysis choices directly from the Neo panel.”

Since Rio’s Neo panel provides a natural-feeling heads up control of color and integration with Rio’s extensive color grading capabilities in real time, this is bound to enhance client-attended sessions.

But for us, the important point is that formerly Rio processed video internally uncompressed.

But as Kataoka explained to me, with 4.5.3, Rio now deals with the larger sized video files today’s production is utilizing with its own version of Dirac to transcode uncompressed video internally with near lossless rendering.

“This increases the system’s storage capacity by a factor of 2-6 times,” he said. “Of course, it will output the results in whatever delivery format is required, or, if needed, from 2:1 to 6:1 compressed to disk.

But Kataoka saved the best for last, discussing something I had seen previewed at the IBC2018 convention. Grass Valley has significantly accelerated its Alchemist File image processing tool that it has been continuously developing over the past two decades. This is now of increasing relevance with the growing popularity of shooting in high frame rates.

“This re-speed algorithm has now been made more stable in 4.5.3,” Kataoka told me. “To make it a cost-efficient part of the whole system, this part of Rio is designed to run on commodity IT equipment. Now Alchemist File operates seamlessly and transparently while converting from one frame rate to another in an image stream.”

Alchemist File is available as a professional- and enterprise-level turnkey solution, as well as a software-only offering, enabling clients to choose their preferred IT vendors.

Grass Valley now has the surfeit of luxury of having both the EDIUS line of NLE’s as well as Rio that they inherited from the SAM (Snell Advance Media) acquisition in February, 2018.

Kataoka told me future development of Rio will be moved from Newbury in the UK to Kobe in Japan, although the Newbury research team will be re-directed to other products.

“We found that Rio and EDIUS live in somewhat different markets,” Kataoka explained. “Rio appeals to high end cinema projects, while EDIUS merges very well into newsrooms. So we anticipate they will continue along their own separate paths for the foreseeable future.”

Of course, since both work well with Go!, Grass Valley’s mobile editing application, the options for their mix-and-match workflow possibilities are still being explored.