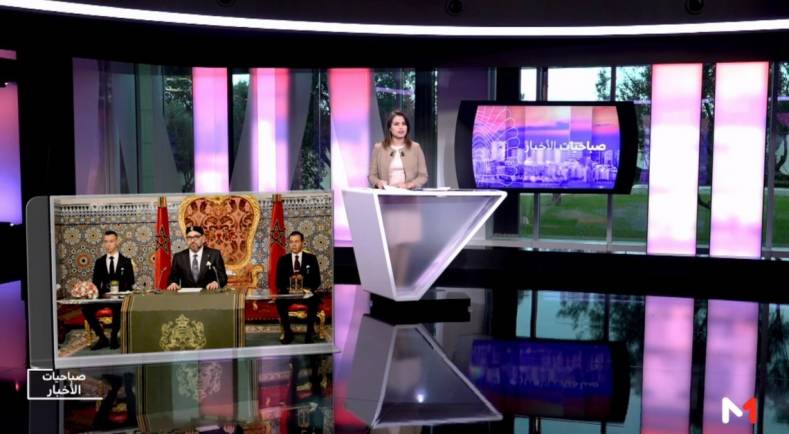 The North African TV news market is so competitive, Medi 1 TV turned to Avid graphics to give them the edge

In this image, that’s Morocco’s King, Mohammed VI, rising up in the Augmented Reality panel inserted by Media1 TV’s new Avid Maestro graphics system, flanked by Crown Prince Moulay El Hassan to his left and Prince Moulay Rachid to his right. In this day of sophisticated unreal TV, do you think the desk that anchorwoman, Safia Haidani, is sitting behind is also a graphic, or is it actually there? (answer below)

Medi1 TV Morocco, Morocco’s private free over-the-air news channel, is in a very competitive TV market, having to provide programming in three different languages amidst north African political turmoil that is even more complicated than during Humphrey Bogart’s heyday at Rick’s.

That’s why over the past year, they upgraded their whole graphics workflow with Avid technology.

“We have installed the complete Maestro package,” Hicham Abderahim, head of creative operations at Medi 1 TV told me in an exclusive interview direct from their broadcast HQ in Tangier, Morocco. “With our workflow, these systems get shared between all our news programming since the installation last December.”

Actually, to cover their diverse audience, Medi 1 TV has four broadcasting centers: Their headquarters in Tangier, Morocco’s capital of Rabat, as well as broadcast facilities in Dakar, the capital of Senegal, and also studios in Abidjan in the Ivory Coast.

Maestro | News is a universal controller for video and 3D graphics

“We have three channels, broadcasting in Arabic and French,” Abderahim told me, “so having a graphics system with maximum flexibility was of great importance to us.”

Integration with Medi 1 TV’s news management system from Dalet was paramount to Abderahim.

“After all, we have less than 24 hours to create most of our news packages,” he said, “ and Maestro has let us be the first broadcaster in Africa to introduce 3D Augmented Reality graphics into news programming.”

As you can imagine, when dealing with so many cultures in your audience, visual communication can often take center stage.

“We bring in new 3D images rising from the floor or moving in from the wings,” Abderahim described. “Since Maestro uses a template-based approach to building graphics, it even makes business statistics more interesting.”

“We have to stay ahead of other stations from Europe, north Africa, the Middle East and, of course, satellite,” Abderahim said. “With our new Maestro system and its compliments, we are able to maintain our position while still staying in budget. It’s also important to us that the system requires a minimum of training, so the time it is running is mostly on the air, not educating our team.

"In these times, Africa is a rapidly growing market,” Abderahim told me, “and we have to be proactive every day to maintain our position with our multi-lingual audience.”

The answer to the question about the news desk is that it is real. Anchorwoman Haidani is standing behind a real piece of modern furniture.

It almost looks good enough to be fake, doesn’t it?