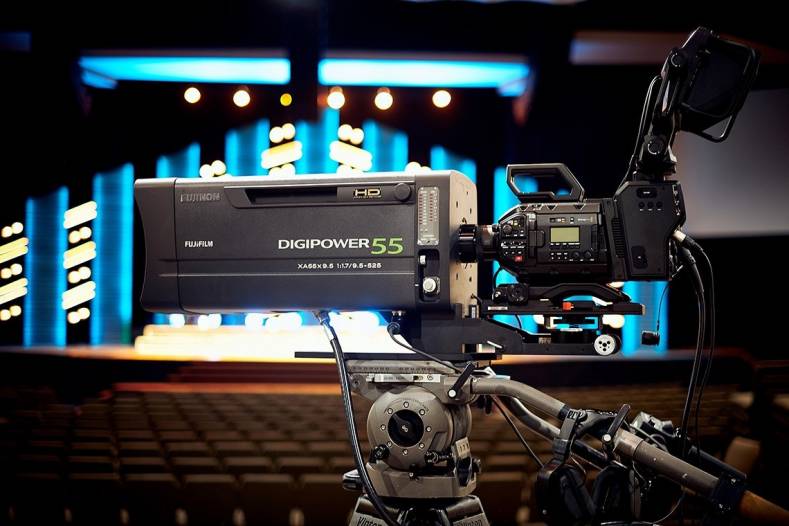 The Fujinon XA55 zoom on a Blackmagic Ursa Broadcast camera at the Christian Faith Center.

Rose Media has selected a Fujinon/Blackmagic combination to transition the Christian Faith Center from SD to 4K compatibility. As the largest church in the Pacific Northwest with its programming carried on national networks, the Christian Faith Center found itself in urgent need of an upgrade. With outdated, standard definition equipment, the networks were pushing the church to overhaul its video infrastructure. With the current technology available, their recent overhaul went beyond HD, and the Church based in Federal Way, WA, is now fully 4K compatible.

Church Pastor Casey Treat’s show Successful Living with CaseyTreat airs weekly on TBN (Trinity Broadcasting Network) and the Hillsong Channel. Earlier this year, engineering staff from both networks requested that the show be produced in HD to mirror the look of their other programming.

The new control room, camera and lenses capture content from Pastor Treat’s Sunday services and video interviews, which comprise the weekly show that airs on Hillsong and TBN. The camera/lens combination is also used for live feeds of the Pastor’s services to other Christian Faith Center locations, to the Church’s Federal Way website and other Church location websites, as well as for closed circuit coverage within the sanctuary.

“While the goal was HD, the entire system is now 4K compatible,” reports Rose. “From the switcher to the cameras and lenses, to the multi-viewers, everything is 4K. They just turn it on in the switcher, and they’ve moved from SD to 4K in one fell swoop.”

While the image quality has taken a serious upturn, the learning curve was far less steep for the all-volunteer camera crew. “They went from a much older SD system,” Rose adds, “and without any training or rehearsal, they were running the new camera and lenses. It was truly a seamless transition.”

The cameras are positioned over a hundred feet away from the stage, so lenses that could cover the distance were essential. The XA55x has a focal length from 9.5 to 525mm (19.0 to 1050mm with a 2× extender). It comes standard with optical image stabilization, making it ideal for any application where the camera operator must maintain a rock steady close-up shot for long periods, such as sporting events, houses of worship, corporate presentations, or concerts. The XA20x ENG lens features a standard focal range of 8.5-170mm and reach out to 340mm (with a 2×), while only weighing 1.58 kg.