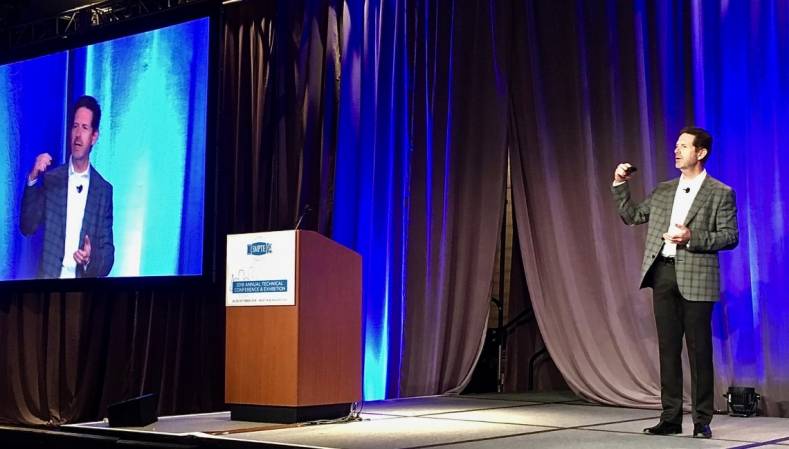 The Symposium keynote address painted a future where time spent in driverless cars may be the most exciting or the most productive part of our day.

“Autonomous vehicles are the unseen driving force of the next wave of innovation,” Doug Davis, svp of the Autonomous Driving Group, Intel, began the keynote address of Monday’s Symposium, the day before the official start of the SMPTE 2018 Annual Technical Conference & Exhibition.

“It will redefine the way we experience life, work, school and home, making possible experiences we never thought possible we’d have.”

Davis estimated that by 2050 the amount of data that will be generated by all this extra time could be worth 50 Trillion dollars.

He said Virtual Reality technology will play a major roll filling this abundance of relaxation time, and used Intel’s own experience delivering true Virtual Reality from last Winter’s Olympic Games as an example of its value.

Then, postulating that the interior of a driverless car could be the perfect environment for encapsulating new experiences, expanded the idea to the revolutionary Volumetric Capture technology that can actually put the viewer inside a three dimensiaonal VR movie scene.

“You could see the POV of the hero. Or the villain,” he said. “Or, on the sports field, you could see a football game from the perspective of the quarterback.”

The problem is, Davis said, the technology is outpacing the available content, kind of like early cell phones waiting for the first killer app.

“Intel commissioned a study from Strategy Analytics called ‘The Passenger Economy’ that predicted that explosion to generate $7T from this new ubiquitously connected technology when cars become the most significant mobile data generating and consuming device that we use.”

From Davis’s perspective, the rise of autonomous cars will be the most ambitious project of our collective lifetime.

After his keynote address, I asked Davis if he could give readers of the SMPTE newsletter and The Broadcast Bridge a statement that would summarize his message.

“Autonomous vehicles are going to save millions of lives, and that is why this technology is so important,” he said.