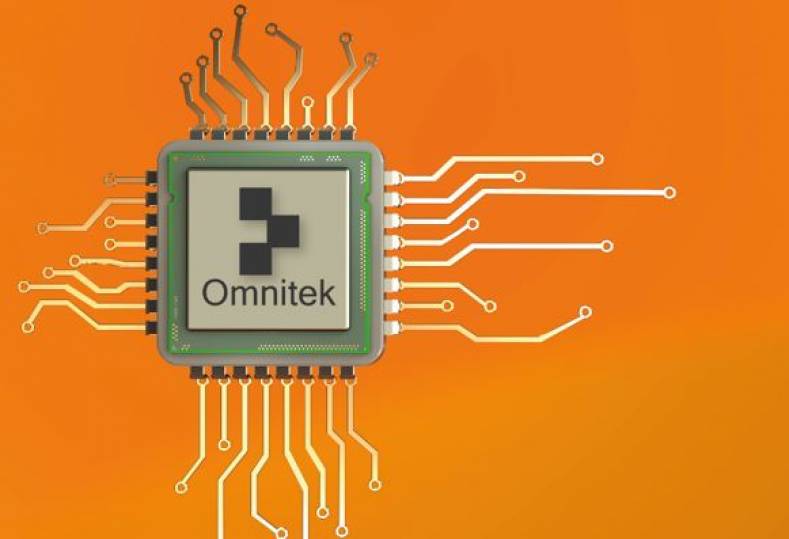 The #1 industry trend more obvious at every broadcast exhibition is the conversion to IP-based video production. IBC 2018 presented further evidence of the process and progress of IP video standards and implementations in TV facilities.

The 2018 International Broadcasting Convention (IBC) marked the introduction of many new solutions to industry change and challenges. The exhibition handles the world of formats equally, be they 50Hz or 60Hz, ATSC or DVB, IP or SDI, Fiber or HDMI, wired or wireless, HD or UHD. There was something of specific interest for nearly every visitor to examine and ask questions about.

While the exhibit halls were generally abuzz about the glamour and future of broadcast UHD and 8K, many engineers were focused on maintaining real-world technical standards during content creation, content flow and content delivery. The growing volume of uncompressed pixels is a bandwidth issue. Creating and transporting the most technically accurate pixels in standardized IP video formats from point to point at the highest quality possible is an engineering issue.

There are several sub-trends within the IP video category, and some of the most relevant for production and post are evident in new IP video gear. At the recent IBC, The Broadcast Bridge was a Media Partner of the IP Showcase, where more than 100 IP video devices from over 60 manufacturers were explained and demonstrated in real-world scenarios. The following is an alphabetic compilation of some of the more interesting IP solutions based on SMPTE ST 2110 and/or ST 2022-6 standards that were prominent at IBC.

Bridge Technologies participated in the IBC IP Showcase again this year, demonstrating how it works in and supports a ST 2110 and ST 2022-6 world. The company focused on the capabilities of the VB440 High Performance IP Appliance Probe in conjunction with its innovative Instrument View, which provides a deep, visual analytics display for the VB440.

The VB440 supports uncompressed media flows over IP with both ST2110 and ST2022-6 transports, providing owners and operators an analytics solution for numerous streams and multiple technologies in real-time and in-parallel. Instrument View is designed specifically for those needing highly accurate, real-time knowledge of networked packet behavior and precise information about the content being carried. ST2059-2, more commonly known as PTP, is also an important part of the VB440’s analytics capability.

A remote PHY implementation was also demonstrated. Remote PHY, otherwise known as DEPI tunnel analysis, is an approach that takes the PHY chip out of a box and puts it at the end of an IP network. One of the philosophies of Remote PHY is to put the least amount of hardware and software at the endpoint and keep the complexity centralized.

Remote PHY implies the use of centralized DOCSIS software. This allows the same software model to be used for I-CCAP and Remote PHY CCAP. Remote PHY, I-CMTS, and M-CMTS can all co-exist in the same chassis and use the same software base and configuration systems. This is a very powerful concept for feature velocity and backward compatibility.

Leader Electronics announced two expansion modules for the LT4610 sync generator at IBC 2018. The new LT4610SER03 Precision Time Protocol option can operate as both a grandmaster or slave clock. It supports ST-2059-2, AES67 and General profiles, and incorporates 10Gb Ethernet (SFP+) and 1Gb Ethernet (RJ-45) interfaces. This option enables the LT4610 to operate in a hybrid IP and SDI environment, allowing all systems to be accurately timed to the same source reference.

Also new, the LT4610SER02 12G-SDI option adds four extra outputs comprising 12G-SDI, 3G-SDI, HD-SDI and SD-SDI respectively. Standard support for SNMP via Ethernet makes it easy to integrate the LT4610 into a network environment. Alarms are generated with SNMP and displayed on the front panel if errors occur.

The end to end platform also includes Mellanox ConnectX Ethernet adapters and LinkX cables.The combination creates an Ethernet Video Fabric (EVF) that simplifies the task of the broadcast engineer to deploy cameras, mixers, monitors, multi-viewers, and other advanced studio equipment. This advanced EVF is critical to enable the rapid transition to an open, high performance IP based multimedia fabric to support the next generation of 4K and 8K.

MuxLab debuted several new products at IBC. One was a new 4K/60 HDMI over IP Uncompressed Extender connects one or many sources to one or many displays through a 10G Ethernet switch. Sources and displays can be easily added or removed for flexibility. Resolutions are supported up to [email protected] and each source and display can be connected to the switch from up to 100m away. When paired with the MuxLab ProDigital Network Controller and the new MuxControl app, the entire AV over IP system is accessible and configurable from anywhere using a PC, smart phone or tablet.

Omnitek demonstrated its new SMPTE 2110 connectivity and Dolby decoder for the Ultra family of products at this year’s IBC, the UltraTQ, UltraXR and Ultra 4K Toolbox. 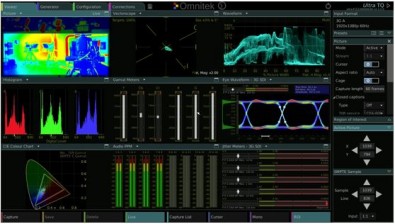 The Omnitek Ultra TQ rasterizer is based on the Ultra 4K Tool Box and Ultra XR technology.

Now in its second year of production, the Ultra TQ was on display and it included full Dolby metadata, Dolby decoding and AES audio support. The Ultra TQ is a SDI/IP waveform rasterizer that includes comprehensive toolsets supporting the challenges posed by HDR, WCG and audio production. It is designed to operate in both SDI and SMPTE 2110 / SMPTE 2022-6 IP environments, with dual PTP support and NMOS integration.

The company also launched its new warranty and care package, “Ultra Passport” at IBC to allow customers purchasing T&M equipment now, to know their investment will not be wasted as further technological challenges appear.

Its silicon chipset solutions are competitive alternatives to ASIC and other ASSP devices, using system-on-chip technology that delivers multi-function video processing features, currently only available using combinations of discrete devices. ‘Javelin’ AV-over-Internet Protocol uses on-chip H.265 video compression for high quality transmission and reception of 4Kp60 video, targeted at ProAV and Broadcast markets. Javelin can support both 12G-SDI and HDMI 2.0 inputs and outputs, and it is aimed at products requiring low bandwidth with lowest latency transfer of 4K resolution content. Omnitek’s implementation and enhancement FPGA IP at the heart of Javelin was demonstrated as a live 4K encode to decode path over a 1Gb/s IP connection. 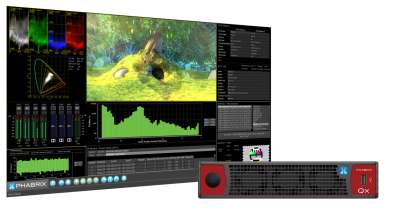 Phabrix demonstrated and explained its latest IP, HDR, 4K/UHD and SDI-stress toolsets for its flagship Qx Series and provided multiple ST 2110 interoperability demonstrations with some of the industry’s leading vendors at IBC 2018.

Phabrix also announced the addition of ITU-R 814-4 SDR/HDR PLUGE and 2111-0 HDR ‘Native’ Color Bar test patterns. ‘Mapped patterns’ are now available for all live HDR production formats. The company also announced support for all live HDR production formats in the Qx Series with the addition of Hybrid Log Gamma (HLG), SR-Live and S-Log3, enhancing the visualization and analysis of 4K/UHD and HD content.

The Qx is a powerful solution for next-generation hybrid IP/SDI environments. Now with SMPTE 2110 (-10, -20, -30 and -40) with PTP and ST 2022-6 support, new stream and network analysis tools include a Packet Profile Generator (PPG), offering an advanced toolset for stress testing video networks, and Packet Interval Timing (PIT) analysis for rapid diagnosis of issues such as packet congestion. Phabrix also showed a series of IP interoperability demonstrations featuring its Qx rasterizer and handheld Sx TAG together with technology from Arista, Nevion, Mellanox, and Trilogy. 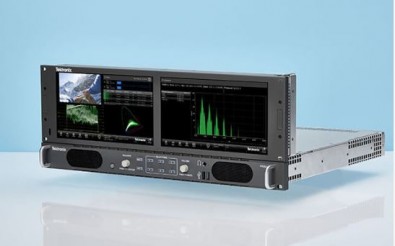 Tektronix equipment was throughout the IBC show floor in partner and customer stands, supporting a range of leading-edge demonstrations. At the show, Tektronix announced that all the necessary connectivity needed for SMPTE ST 2022-6/7, ST 2110, and PTP (ST 2059) will now be standard on the latest additions to the PRISM family .

The Tektronix PRISM and SPG8000A products were core T&M components in the AIMS IP Showcase Theater at IBC 2018. The PRISM measurement unit and the SPG8000A, a Sync Pulse Generator supporting PTP, were also used in multiple locations, providing various support functions for the entire exhibit.

Tektronix announced the expansion of its PRISM hybrid IP/SDI monitoring line with the addition of a 10G operations unit, integrated audio and dual-screen extension capabilities, as well as a 25G upgrade path for all PRISM products. Four new models of the PRISM Monitoring Tool were introduced. The next generation is available in both a 3RU ½ Rack or a 1RU 19” rack form factor. The 3RU unit comes with an integrated touchscreen that provides unmatched screen real estate for easy operation.

Tektronix also introduced the industry’s first ever extended display, available to use with both the new form factors. By extending PRISM’s full touch screen architecture into a fifth window or tile on a second screen, live-production customers can now view full size waveform and vector side by side without needing to purchase a second measurement instrument.