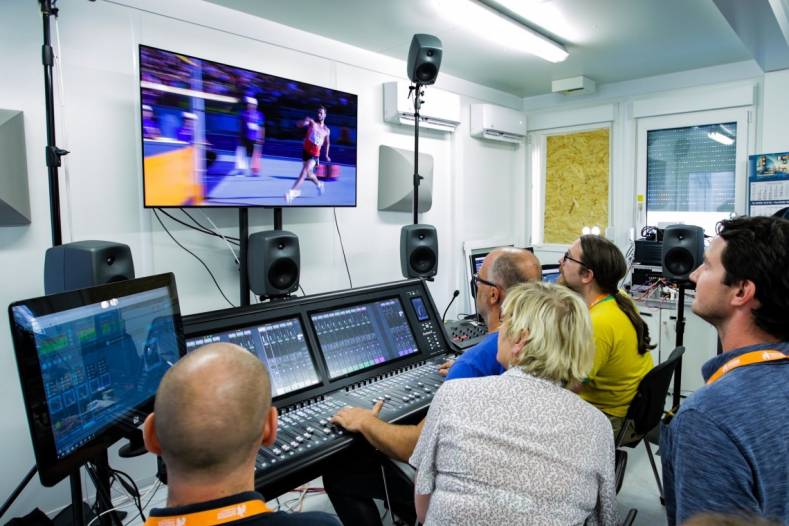 A behind-the-scenes look at an SSL T S300-32 console mixing both AC-4 and MPEG-H 7.0.4 simultaneously at the 2018 European Championships.

The trials covered two track and field events each day for four days. A number of broadcast engineers were invited to take the helm and mix individual events, producing immersive 7.0.4 beds and four object channels: English and French commentary, and English and French Audio Description.

To handle the high channel counts and complex routing requirements, an SSL Network I/O was deployed, alongside Dante AoIP I/O from other manufacturers, including Audinate's own Dante Virtual Soundcard. This was all connected to a redundant IP network using two Cisco SG500 and two Cisco SG300 switches, providing a 1024 x 1024 audio routing system.

I/O management, creation of logical devices, and network-wide routing were managed directly from the System T S300 GUI. This meant real channel numbers and varying channel orders could be hidden from the operators, who instead simply routed complete 7.1.4 and 4.0.4 logical devices.

SSL's Tom Knowles, Product Manager – Broadcast Systems, was present at the trials, guiding engineers on System T and its new immersive features. "The operators coped really well," he notes. "It was gratifying to see them get to grips with the console, the routing, and the NGA features so quickly. We weren't telling people how to mix, we were facilitating their preferences.

"With the mix of sources and formats we were dealing with, the console's 3D panner was essential. It was instrumental in building the ambient beds and moving a big variety of source material in the 3D space without having to use aux channels for height, for example.

"It was a great pleasure collaborating with all the companies involved this event. On the audio side, we worked directly with B-com, Dolby, EBU, Fraunhofer IIS, Junger, and Qualcomm to prove that we are already delivering immersive, next generation audio."