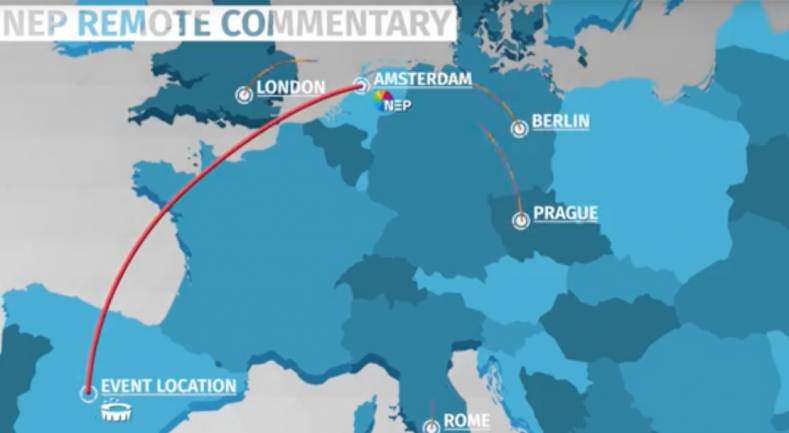 The NEP Remote Commentary system ensures that all commentary feeds are synchronized before they are sent out to the viewer.

At a time when broadcasters are being challenged to produce more localized content for multiple languages, remotely produced live events are gaining traction with sports producers around the world. NEP Media Solutions is making multi-language production cost-effective with its Remote Commentary system.

Developed to increase the value of commentary content, reduce event costs, and deliver the highest audio standards, the NEP system takes one of the most complex and production team intensive workflows and makes it easy and scalable to accommodate numerous language feeds simultaneously.

Employing precise audio auto-mixing—including NEP’s audio and video fingerprint technology that automatically detects lip sync offsets, incorrect formats or wrong audio channel mapping—the NEP Remote Commentary system ensures that these latencies are compensated for and that all of the commentary feeds are synchronized before its sent out to the viewer. Users can source an unlimited number of commentary feeds and mix them together with the international sound coming from the event location. The final audio and video mixed languages can be distributed through any transcoding platform or linear or OTT.

It’s a plug-and-play system that only requires power and an Internet connection of at least 2 Mbps.

Discovery and its sports brand Eurosport used the Remote Commentary solution for its coverage of the Winter Olympic Games in China. Due to the fact that multiple simultaneous event feeds and languages needed to be delivered to viewers in different countries via Eurosport.com and the Eurosport app, sports fans could watch their favorite sport in their own language.

An NEP system on site in PyeongChang handled 13 event feeds in nine languages per event feed, for a total of 117 simultaneous commentaries. With the NEP Remote Commentary system, it would be too costly, too labor intensive to produce so many languages.

NEP calls the Remote Commentary system the world’s first automated production solution that can handle multiple simultaneous events, feeds and languages with viewers in different countries and on various platforms. It includes portable commentary units that can be easily configured to a specific event, even when commentators and the event are on different sides of the world.

I’m very proud that people that couldn't watch sports in their own language before are now able to so using this system.”

Choffat added that it’s now possible to source commentary from any event location as well as from offshoot commentary booths. Due to the company’s global reach, NEP can send a remote commentary box wherever there’s an Internet connection (from an OB van on site to a commentator’s basement studio) to seamlessly tie in to a live broadcast.

The Remote Commentary system will be demonstrated live at the 2018 IBC Show in Amsterdam.