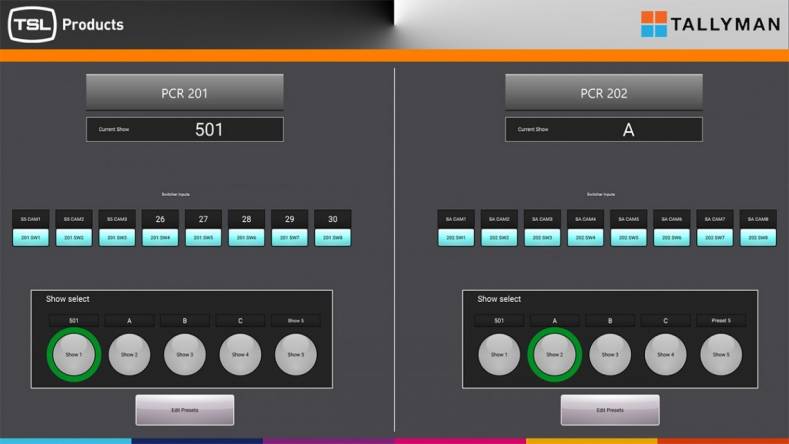 At the 2018 IBC Show, TSL Products will show a number of new features and expanded functionality for its Advanced Broadcast Control Systems that connect traditional, IP and hybrid networks. This includes edge device routing in remote production environments as well as playout and automation functionalities.

With these new developments and the addition of new protocols and peripheral devices, TSL brings more power to its control products and opens them up to new areas of the broadcast chain.

Dan Bailey, Control Product Manager at TSL Products, said the goal is to show how its solutions help operators gain complete control of integrated systems, no matter the complexity of the underlying infrastructure. In particular, the company will demonstrate the ability to control IP edge devices on ST 2110 networks, as well as flexible tools for remote production.

Working in tandem with interfaces and functions offered from U.S.-based partner DNF Controls, new features include IP Device Routing, a simple and intuitive interface that translates IP workflows to retain the familiarity of SDI routing and provides signal control and routes edge devices in ST 2110 networks. Additional tools for remote production include open channel delegation and added security controls to protect devices, with a system built on independent device protocol translation and intuitive interfaces that add flexibility and efficiency to operations.

The company will demonstrate the ability to control IP edge devices on ST 2110 networks, as well as flexible tools for remote production.

Updates to playout functions include automation for up to four channels, or the ability to align with existing systems to act as a cost-effective secondary system. In Cloud playout mode, a translation layer can be implemented to allow existing automation systems to integrate with the latest Cloud Playout systems using a user’s existing interfaces to familiar playout devices. Also, users can safely switch between SCTE 104/35 Command Generators and distribute commands for transmission applications.

Individual and intelligent button panels control any GPI/O, IP, RS422 or RS232-enabled device and from a single button push, from simple actions to powerful macros.