At IBC2018 we’re going to see Brainstorm branching into broadcast graphics with its Neuron system.

You can count on a large crowd around the Brainstorm exhibit at IBC2018 as they challenge visitors to distinguish the virtual set images they create from real ones.

This will be enhanced by the new combination of the Brainstorm eStudio renderer with the Epic Games Unreal Engine inside the newly released version 3 of their Combined Render Engine application.

As Miguel Churruca, Brainstorm’s marketing and communications director, told me during our pre-convention interview direct from Madrid, Spain, the virtual studio environment we’ll be presented with is going to benefit from the inclusion of Aston graphics material within its walls. 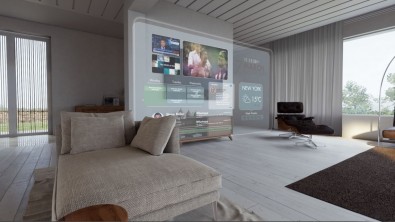 Thanks to Brainstorm’s use of Aston graphics, it almost looks like you could sit down on that cushioned sofa, doesn’t it?

“We are always bringing out enhancements to our system,” Churruca said, “and I’m glad to say the market has been responding very well to our new system.”

One production using their technology stateside are the WrestleMania broadcasts that have such a strong niche following.

It’s the Aston graphics, a company that Brainstorm acquired in 2009, with its user-friendly graphics creation tools and object properties within a contextual interface, that helps adapt the Brainstorm technology to applications ranging from channel branding to news and sports graphics charts.

But now, as Churruca explained, the company is expanding into broadcast graphics with its Neuron system.

“Neuron has been developed out of a product we had a while ago called BrainNews,” he said. “It is able to take all the real time 3D graphics capability we have been perfecting and direct them toward the newsroom and other common broadcast workflows.”

Neuron is a MOS (Media Object Server) compatible, template-based graphics system that can be used in the newsroom for weather, traffic and sports information.

Speaking of sports, Churruca gave hints of a new interactive sports graphics application that is under development with a major Spanish broadcaster.

“Any person in front of a camera will be able to use this system,” he said. “It’s very simple to use and will change the way the whole sports broadcast looks on TV.”

You can bet I’ll be covering this new development from IBC2018.