ChyronHego is leading the way into IP production far beyond the newsroom, adopting SMPTE ST 2110 in all its major graphics and production equipment

ChyronHego will have a busy IBC 2018 stand because they will be presenting their latest innovations for live production, sports data, and analysis for both broadcast and streaming social media.

As Boromy Ung, chief product officer for ChyronHego, said during our one-on-one pre-IBC interview, “The newsroom is no longer just for linear journalist channels because newsrooms want to leverage their assets to push content to social media and OTT channels. That’s why we will be previewing the latest version 4.5 of our Camio graphic asset management system with a powerful new render engine, which we are calling the Media Render Engine.”

Because ChyronHego has plug-ins for most NLE’s, they also support external render engines to create graphics for  either the New Media Render Engine or from Camio itself.

The company will be showcasing the latest version of LUCI5, their template browser module based on HTML5, that lets producers find the proper graphics template for a given story without having to leave the NRCS (Newsroom Computer System) so the necessary text can be filled out on the fly.

The Metacast 2.6 weather graphics system is fully integrated with the Camio universe, but can also be used as a standalone system. New features include advanced animation for all graphics layers, even the weather model layers, and users will now be able to edit palettes in either in Celsius or Fahrenheit even when the raw values are delivered in the Kelvin scale. At IBC 2018, visitors will see new playout tools for Metacast 2.6 that support keyboard commands for queuing and taking graphics to air. 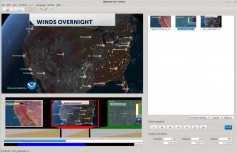 “You can even output separate graphics on up to four channels from one input feed,” Ung told me, “and this could include multiple languages. This can be a useful tool to generate revenue out of different regions during a single sports broadcast.”

Virtual Placement now includes enhancements in motion blur to its tracking capability, something that is especially crucial when following the action in horse racing with the infield fence whizzing by the camera.

“Motion blur has always been one of the limitations of scene tracking,” Ung said, “but our new algorithms in Virtual Placement are able to overcome this previous confusion.”

Augmented Reality (AR) will also be a major component of the ChyronHego exhibit with both Plutonium and Neon virtual studio and robotic camera systems on display.

Version 5 of Plutonium is a virtual set tracking system, while Neon version 4 is an all-in-one trackless virtual set.

A new HTML5-based control panel for both systems, based on the company’s Live Assist Panels platform, will be demonstrated as well as new integrations of the software with industry-leading gaming engines such as Unreal from Epic Games.

But I wanted Ung to explain the difference between the tracked and trackless studio robotic applications.

“The trackless Neon 4 system is designed for smaller studio environments that are limited in space against a small green screen where the talent doesn’t move around the set very much,” he explained, “This is applicable for situations like Houses of Worship or lower tiered broadcasters. A tracked system like Plutonium 5 is for larger sets where the talent’s position has to be calculated against a much larger and more complicated virtual set that is actually created inside the graphics computer.”

The newest version of the Live Assist Panels user interface and control panel creation tool will demonstrate how the latest multi-user Web technologies can be leveraged to create custom-designed GUI’s for touch screen control of any ChyronHego product.

“This changes the whole production paradigm,” Ung said. “In most control rooms, the operator looks up at the multiviewer screens and then has to look down at the dedicated buttons on a switcher panel. With Live Assist Panel technology, we generate a multiviewer screen on your own tablet and put touchscreen controls on top of the relevant display screen. The operator doesn’t have to move his or her eyes to complete the necessary operation.” 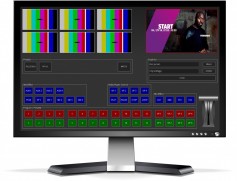 Visitors to the stand will also seethe latest version of ChyronHego’s universal graphic platform, Prime Graphics 3.1. Prime Graphics 3.1 accomplishes five mission-critical applications within a single 4K and IP-ready playout platform: a character generator, a clip player, a video wall system, a graphic’s-driven touchscreen platform and an on-screen branding system. The platform is IP-ready and supports SMPTE ST 2110 and 10-bit HDR color allowing it to deliver the client’s choice of HLG or S-Log3 formats.

Among its other new capabilities are support for ChyronHego's new Intellicommader Keyboard for Lyric, with a new fast recall feature, a true HDR canvas, and a new concept called base scene workflow.