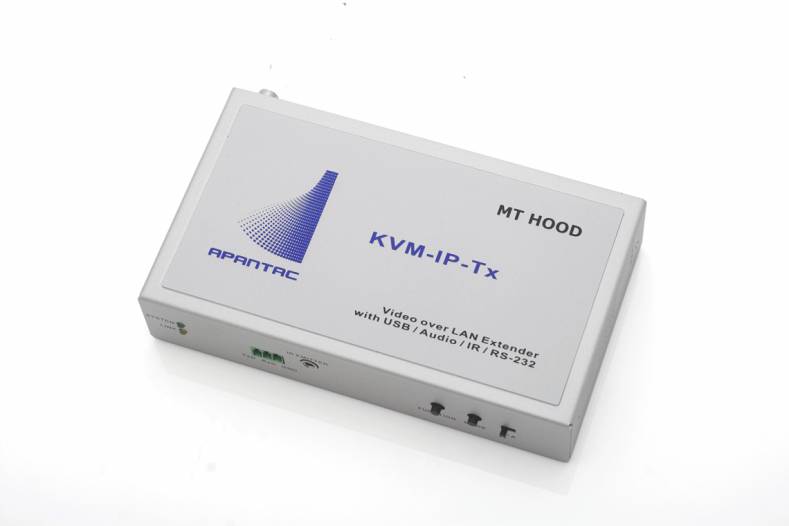 Serving as extenders and receivers, the KVM over IP boxes provide point-to-point extension of HDMI, DVI, or analog VGA over CATx.

At the 2018 IBC Show Apantac— celebrating its 10-year anniversary—will show new additions to its Tahoma multiviewers and KVM over IP extender/receiver sets that set new performance milestones while offer pristine picture quality and, in the case of the extenders, very low latency.

The company will spotlight its new KVM over IP extender/receiver set (Models: KVM-IP-Tx/Rx) that are designed for applications where multiple local computers need to be accessed from multiple remote locations.

Serving as extenders and receivers, the Apantac KVM over IP boxes provide point-to-point extension of HDMI, DVI, or analog VGA over CATx. Functioning as a KVM over IP matrix, the units provide one-to-many or many-to-many console to server access, allowing for seamless monitoring and control. Users can have concurrent access to a server from several remote consoles as well as from the local console. Server selection is accomplished with configurable hotkeys from a console keyboard or through the management software.

For point-to-point distribution, HDMI, DVI or analog VGA signals can be extended up to 170 meters and up to 100 meters when the KVM over IP devices are connected to a GigE switch. Bi-directional analog audio, RS-232 and IR are also extended and supported outputs include DVI/HDMI and VGA. Since the receiver includes four USB ports, a user can not only connect a keyboard and a mouse, but also other devices such as a touchscreen interface or a flash drive.

Each extender/receiver device can be configured via a web page or through the configuration & control management software application. A dual head extender/receiver set over a single IP link is also available (Models: KVM-2-IP-Tx/Rx).

The architecture is based on a 4x1 “cascadable” multiviewer that allows facilities to increase the number of inputs to be monitored on a single display. The UE-8 , for example, is built with two UE-4 units in the same chassis. More units can be cascaded externally for greater input support. For example: the eight-input version can be configured to work as an 8x1 or as two independent 4x1 multiviewers.

One unique feature of the Tahoma UE is the optional KVM function, which allows the user to control multiple networked computers with a single mouse and keyboard. It also provides control of a given computer by simply moving the mouse over the corresponding window on the multiviewer output.