Because Apple’s iPhone is used by many journalists for broadcast news gathering, equipment manufacturers have been rushing to fill the gaps with ultralight accessory gear including audio, lenses and feather-weight tripods. While the quality of gear being offered varies widely, CEntrance has hit a home run with one of the best micro-sized mobile recording interfaces available for journalists.

The CEntrance MixerFace R4 ($349.99), weighing only 4.3 ounces, is a mobile recording powerhouse about the size of an iPhone with a set of pro-level features packed into its diminutive, all-aluminum case. It has the fit, finish and ruggedness that informs users much effort went into its design and construction.

The MixerFace R4 can be used by anyone from musicians to podcasters for a range of applications, but its features targeted to digital journalists attracted my attention. Digital journalists are a new breed of news reporter who must do everything at once using the lightest weight gear possible. Low weight, however, doesn’t necessarily translate to reliable, pro quality equipment. There is no cheap plastic here; this device is built like a tank. 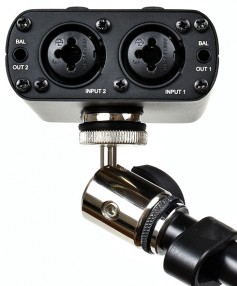 The MixerFace R4 has two XLR inputs with 48-volt phantom power (full-spec 10mA per channel) to accommodate any high-end mics. The Jasmine microphone preamplifiers — with 55dB of gain and a 113dBu signal-to-noise ratio — deliver pristine signals for up to 32-bit, 192kHz recording.

The Jasmine technology, created by CEntrance, is an upgraded mic preamp designed to lower noise and distortion and offer more gain to fit a variety of microphones and input sources. The resulting two-stage preamp features the company’s most robust gain, the best signal-to-noise ratio and the lowest THD numbers of any previous product.

The mixer feeds separate mic tracks to an iPhone, a Mac, Windows or iOS computer, a DSLR camera or an audio recorder. Many of these feeds can be done simultaneously. It has low-cut filters, switchable Hi-Z inputs, an aux line input, and outputs that are balanced, unbalanced and for headphones (16 to 600 Ohms). 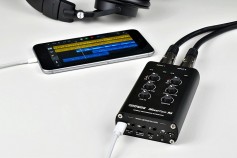 The amp will drive any headphones, regardless of manufacturer. We found it delivered ample gain for several headphones.

The portable mixer uses Lithium-Polymer batteries, which provide longer operation than standard Lithium-Ion cells. The same technology is already used in the company’s other products, which have been in the field for about five years and still work well, despite daily use. 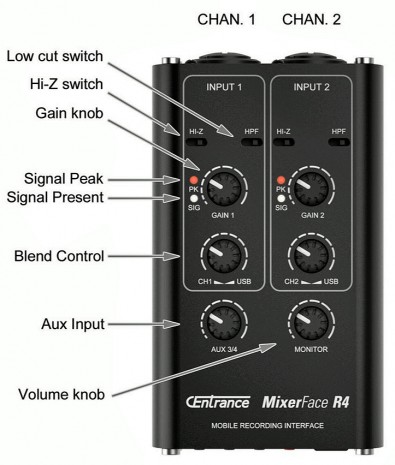 The rechargeable battery will last longer on a single charge, compared to using AA batteries. Also, users can leave the unit plugged into the charger with no harm. The design does not over-stress the battery, which prolongs battery life. The unit’s Li-Polymer battery runs eight hours of play or record time, varying with the draw needed to power the mics.

The battery can be charged using a five volt adapter that works with the included USB “micro B” cable. These typically 2.4 amp chargers are suppled with larger iOS devices, including iPads. Any two amp or larger sized charger is recommended.

The MixerFace R4 can be used many ways. Let’s say the reporter wants to do a on-camera video piece using an iPhone. The mixer can grab control of the audio recording process in the video recording app and apply the professional audio results to the video. It is all very seamless. 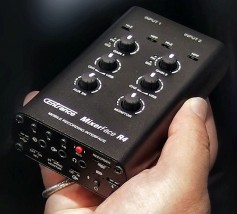 If the user wants to mix audio that has already been recorded using Pro Tools, Logic or some other high-end DAW, the MixerFace R4 can serve as the desktop or laptop interface. It can connect to a Mac, iOS or PC computer like any traditional audio recording interface and its balanced outputs can feed studio monitors. The top panel monitor pot on the MixerFace becomes the room listening volume control.

As a multimedia journalist myself, I switched to an all iPhone video kit last year with the arrival of the iPhone X. My goal was to operate out of a lightweight, single camera bag I could carry over my shoulder. It has proven successful, though I am always looking for refined accessories that do a better job.

On that front, the biggest difficulty has been identifying the gear that is actual professional quality with the ability to work reliably time after time. It is harder than you might think. For me, the CEntrance MixerFace R4 is the missing piece for audio. It beats everything I have tried — regardless of cost.